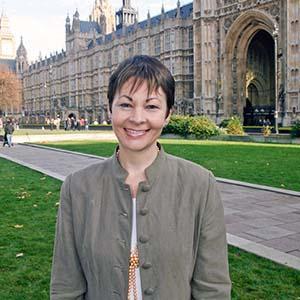 Caroline was elected as Member of Parliament for Brighton Pavilion in 2010. She served as leader of the Green Party of England and Wales from 2008 to 2012 - and from 1999-2010 she served as one of the Party's first MEPs and represented the South East region until becoming the UK's first Green MP.

Caroline is a Co-Chair of the ALL PARTY PARLIAMENTARY GROUP on Fuel Poverty and Energy Efficiency, Vice Chair of the Public and Commercial Services, Sustainable Housing, CND and Animal Welfare All Party Parliamentary Groups. She is also a member of various other all-party groups, including on HIV and Aids, 6th Form Colleges, Children and International Corporate Responsibility.

Caroline's book, Honourable Friends, details her first parliamentary term as brought a fresh, green voice to the House of Commons.

She has been voted the UK's MOST ETHICAL POLITICIAN in 2007, 2009 and 2010 by readers of the Observer, and in 2008 was judged one of the Guardian’s top “eco-heroes”. She received Red magazine's Woman of the Year Award 2010 in the ethical/eco category and is in the Environment Agency's Top 100 Eco-Heroes of all time. 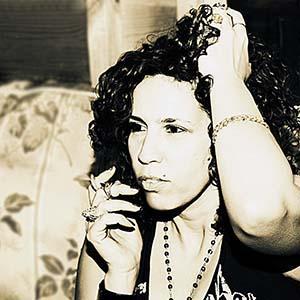 Jasmine Alexander is a world renowned Jewellery Designer, heralded by international press as the "Poet Goldsmith"... or the "Westwood, Galliano or McQueen of the Jewellery World”.  Just 2 years after launching her eponymous brand she was officially appointed an Ambassador of British Jewellery, was nominated for a string of national and international awards, has received The World Gold Council’s ‘Must See’ mark and with a penchant for inspiring joint ventures has collaborated with:

“A global trend setter, whose designs have been featured in the luxury coveted annual GemVisions Trend publication the last 3 years in a row, detailing the artists setting the world’s trends” - published by SWAROVSKI.

Jasmine crewed with Sea Shepherd UK on our Seal Defence Campaign preventing the shooting of seals by Wild Salmon Netsmen near Thurso, Scotland in 2015.

Why I stand with Sea Shepherd:

In an era that will almost certainly go down in history as the age of the narcissist as humanity marches into its desolate future hand in hand with itself... Smitten by its own academic and aesthetic prowess, it also walks blind...and deaf...to the other shadow that casts and screams its dark hue across 'our time' on this ‘Earth’ into the 6th great mass extinction and this is never more prevalent or catastrophic than in our oceans.  Whilst we shall hang our heads in shame for the numerous species already lost and fast fading from our lands...it is our very lives that hang in the balance with the loss of oceanic species and the throwing of this very delicate Ecosystem out of sync. To quote Captain Paul Watson: "If the Oceans die, we die".

I am despaired with certain quotients of humanity & international Governments and lay the blame for this 21st century travesty squarely at their feet. I find myself courting great consuming sorrows for the insensate consistent murder of non-human sentient species for the sake of vacuous vanity and bloodied greed.  But there is hope... I am given hope... Because as I look across the face of this world I see a faction that stands out, that stands nigh on alone... a peaceful conscious army of beautiful minds no longer prepared to hope the change is effected by another... a faction that exists out on the high seas and on the coastlines... Engaging in direct action... A passionate compassionate movement brave enough to put their lives on the line to save the lives others... Other species... Supraliminal magnificent species... I find a little peace and an inordinate amount of inspired desire... To also stand up and be counted, to put myself on the line, to live and die for a noble cause... To effect change… To ‘defend, conserve and protect’ this natural world for future generations...

I unequivocally stand with Sea Shepherd and Captain Paul Watson. 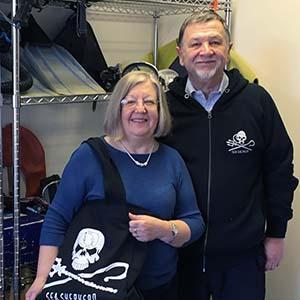 We have supported marine related charities since the early nineties, this support sits well alongside our day jobs of arranging insurance for much of the world's dive trades.

Over the last twenty years we have seen the effectiveness of Sea Shepherd's direct action operations and have been won over by it. We believe it's the only effective protest method in the constant battle to save our oceans.

We were surprised and honoured to be asked to be part of a panel of advisors to Sea Shepherd UK.  We hope to support the courage demonstrated by the Sea Shepherd frontline volunteers in any way we can.  It's a powerful image and message to the rest of us of what just a few committed people can achieve. 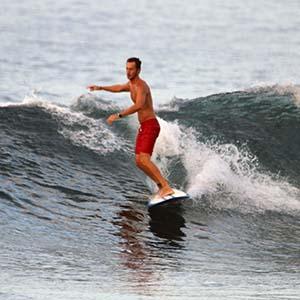 I am 36 years old, married with 2 children, born in Switzerland and raised in the Indian Ocean during my first years then back to Switzerland. I worked in the hospitality industry during the first 5 years of my career, then in the real estate for the last ten years and am currently running a family office.

There are two things in my life that are more important than anything: my family and the ocean. Family is the reason I wake up every morning trying to be the best father / husband for the ones that give me love and that I cherish the most. The ocean is the fuel I need to reach my objectives, my inspiration and the place I escape to. I always considered the oceans with a lot of humility and thankfulness for what they gave me since I was born… like that… just for free. A part of being an amazing playground with endless possibilities, ocean is the source of life since millenniums and my opinion is that as guests on this planet for just a few years, human should treat the oceans with much more respect than it does since already a much too long time.

I discovered Sea Shepherd and its movement back in 2013 during a trip in Australia hearing about the whale campaign in Antarctica and quickly wanted to find more information. I easily found out that what I thought to be only an organisation was actually a real movement with volunteers all around the world dedicated with absolute no compromise. The fights that Sea shepherd takes around the world are not questionable… straight to the point and so is the way volunteers act every day. Very quickly I thought that if I could support such a movement there was no excuse not doing it. Which is what I did and today I also am a volunteer with the local group of Sea Shepherd Switzerland, assisting the logistics and working on a project that will bring me to talk in schools an sensitize students about the future of our oceans and how they can make a change.

View our International Board of Advisors