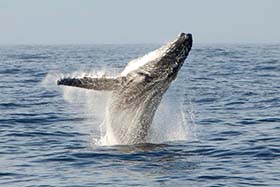 Humpback whale breaching. Photo: Tim WattersAn affidavit provided by Sea Shepherd’s Captain Peter Hammarstedt was submitted as evidence in a contempt case against Japanese whaling company, Kyodo Senpaku Kaisha Ltd (Kyodo), in the Australian Federal Court in Sydney, Australia. The evidence has helped the court to issue a $1million fine to the whalers.

In 2008, Humane Society International (HSI) successfully obtained a declaration in the Federal Court that Kyodo was breaking Australian law by killing whales in Antarctica under the guise of scientific research, and also obtained an injunction ordering the company to stop killing whales in the Australian Whale Sanctuary.

Despite the injunction, the Japanese whaling fleet has continued to slaughter whales in the protected waters of the Southern Ocean. HSI is now suing Kyodo for the breach.

Hammarstedt, who was Captain of the Sea Shepherd ship Bob Barker at the time, witnessed the slaughter of a protected Minke whale by the Japanese whaling fleet inside the Australian Whale Sanctuary, 60 nautical miles from the Australian managed Davis Base.

In the affidavit, Captain Hammarstedt states:

“One of the crew members then said to me words to the effect of: 'The harpoon has been fired.' I stepped away from the helm to confirm for myself that the gunner on the Yushin Maru No. 2 had fired the harpoon and hit a whale. I saw through binoculars thrashing in the water that I assumed to be from a whale in front of the bow of the Yushin Maru No. 2.”

Sea Shepherd has congratulated HSI, and the Environmental Defenders Office of NSW who acted for HSI in the case, on the victory. “This is an incredible win for the whales. Sea Shepherd extends a heart-felt congratulations to HSI on the victory and on their determination to see the Japanese whale poachers brought to justice,” said Jeff Hansen, Managing Director of Sea Shepherd Australia.

With the Federal Court handing out this massive fine, Sea Shepherd calls on Australian Prime Minister Malcolm Turnbull to ensure that Japan’s illegal whaling operations are at the top of the agenda of his visit to Japan this December.

“The onus for stopping Japan from returning to Antarctica to slaughter whales this year now lies directly with the Australian government. Prime Minister Malcolm Turnbull must ensure that Australia’s stance against whaling in the Southern Ocean is a priority in his upcoming discussions with Japan’s Prime Minister Shinzō Abe. To do otherwise would be to lose the faith of the Australian people who are so passionately committed to the protection of the whales,” said Hammarstedt.