Waters of the Faroe Islands Run Red With Another Horrific Grind 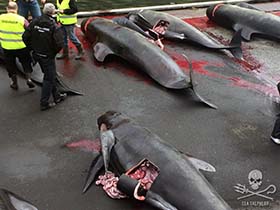 Another bloody slaughter in the name of tradition in the Faroe Islands. Photo: Rosie KunnekeFor the second time this season, the waters of the Faroe Islands are red with the blood of slaughtered pilot whales, killed in the infamous drive hunt know by the Faroese term grindadráp or grind.

The pod was spotted at approximately 0830 local time this morning. The pilot whales were then driven to Hvannasund in the north of the island archipelago, where they were eventually slaughtered.

Sea Shepherd estimates that between 20 and 30 pilot whales were killed in the slaughter.

The Sea Shepherd ship, Brigitte Bardot, was patrolling approximately 25 nautical miles to the south of the region where the whales were spotted and was not able to reach the area in time.

Operation Sleppid Grindini Land Team Leader, Rosie Kunneke of South Africa, said, “Another harrowing, bloody massacre has been allowed to occur, under the protection of the increasing police state in the Faroe Islands. While authorities ramp-up grind laws and penalties, which require even those visiting the islands to partake in this brutal slaughter, Sea Shepherd remains on watch. We will not let the screams of these magnificent, slaughtered animals go unheard.” 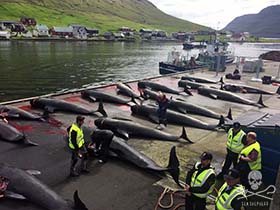 The aftermath. 20-30 pilot whales, brutally slaughtered in the Faroe Islands this morning. Photo: Rosie KunnekeAccording to Faroese laws that govern the grindadráp, any person visiting the islands must report all sightings of whales and dolphins to local authorities so that the cetaceans can be targeted for slaughter. Those who do not abide by these laws may face arrest and prosecution, with penalties of 25,000 Faroese króna or just over 3,000 euros, and imprisonment of two years.

CEO of Sea Shepherd Global and Operation Sleppid Grindini Campaign Leader, Captain Alex Cornelissen, said, “There is something truly sinister about a law that aims to silence those who fight to protect life, while protecting those engage in this blood-thirsty practice. It is this exactly this ominous state of affairs in the Faroe Islands that requires Sea Shepherd’s presence in the region.” 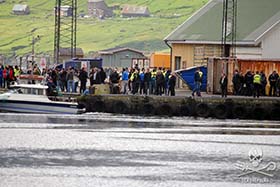 Locals gather for the slaughter at Hvannasund. Photo: Nils Greskewitz 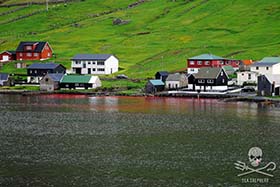 The waters run red at Hvannasund in the Faroe Islands as approximately 20-30 pilot whales are slaughtered. Photo: Nils Greskewitz