Victory Against Illegal Fishing in Antarctica 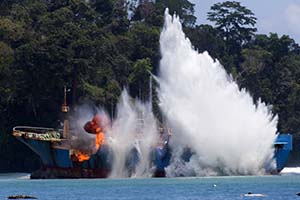 Sea Shepherd representatives were on the ground to film the sinking, which marks the end of over a decade of toothfish poaching in the Southern Ocean at the hands of the Bandit 6, and the conclusion of Sea Shepherd’s 12th Southern Ocean Defense Campaign, Operation Icefish 2015-16.

Operation Icefish 2015-16 Campaign Leader, Captain Siddharth Chakravarty, said, “In a span of just 15 months, Sea Shepherd has cleaned up the Southern Ocean of illegal fishing. An issue that was largely thought to be unsolvable under current international legal instruments was confronted and dealt with using two direct-action, at-sea campaigns. Six of the most notorious and persistent poaching vessels on this planet are now out of commission making this one of the biggest successes in marine conservation history.”

Sea Shepherd first focused its attention on the illegal operations of the Bandit 6 toothfish vessels in 2014 when it launched Operation Icefish; the organization’s first campaign to target illegal, unreported, unregulated (IUU) fishing in the Southern Ocean.

The six, outlawed vessel had exploited loopholes in international law for over ten years, fishing illegally for vulnerable Antarctic and Patagonian toothfish in the shadowlands of Antarctica, outside the reach of traditional law enforcement.

The campaign, which lasted for over five months and saw the historical and world-famous chase of the most notorious of the poaching vessels, Thunder, by the Sea Shepherd ship, Bob Barker, spawned international efforts that caused massive disruptions to the illegal toothfish trade.

On April 6, following the 110-pursuit, the Thunder was scuttled by its Captain and two Officers in the waters of São Tomé and Príncipe, West Africa. Evidence provided by Sea Shepherd later led to the conviction of the three responsible, sentences of approximately three years in jail each, and a fines of €15 million.

In May, two more of the Bandit 6, the Songhua and Yongding, were apprehended in Cabo Verde, West Africa, thanks to intelligence provided to international law enforcement by Captain Hammarstedt. Later that same month, authorities in Malaysia detained the fourth of the Bandit 6 vessels, the Perlon.

Twelve months after the commencement of Operation Icefish, only two of the Bandit 6 vessels, the Viking and Kunlun, remained at large. Led by returning Captain Chakravarty, Sea Shepherd launched Operation Icefish 2015-16, which aimed to eradicate the last toothfish poachers from Antarctic waters.

In early February 2016, Sea Shepherd announced that authorities in Senegal had arrested the Kunlun. The vessel, which had been chased out of its hunting grounds in the Southern Ocean by Captain Chakravarty and the crew of the Sam Simon in early 2015, had been prevented from continuing its poaching operations since that time.

A week later, after tracking the Viking to South East Asia, Captain Chakravarty notified officials in Indonesia of the suspected entry of the poaching vessel into Indonesian waters. Then on February 26, the Indonesian Navy announced that it had arrested the Viking.

Following two weeks of investigations, Indonesian authorities charged the Viking and its crew with fisheries crimes. The vessel was subsequently sunk in accordance with Indonesian law.

The Viking’s Captain, Huan Venesa of Chile, and its crew of 10 from Indonesia, Chile, Argentina, Myanmar and Peru, remain in detention in Indonesia.

Captain Hammarstedt said, “The success of the Operation Icefish campaigns would not have been possible without the backing of our supporters. Their unwavering support for our on-going mission to defend, conserve and protect the world’s oceans has made the abolition of the Bandit 6 from the Southern Ocean possible. To them, we extend our gratitude as they share with us in this massive victory.” 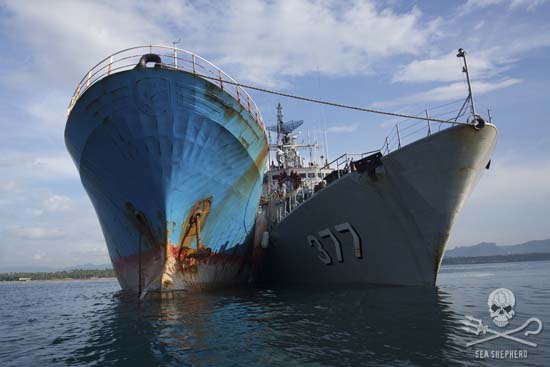 The Viking, alongside an Indonesian Navy vessel. Photo: Gary Stokes 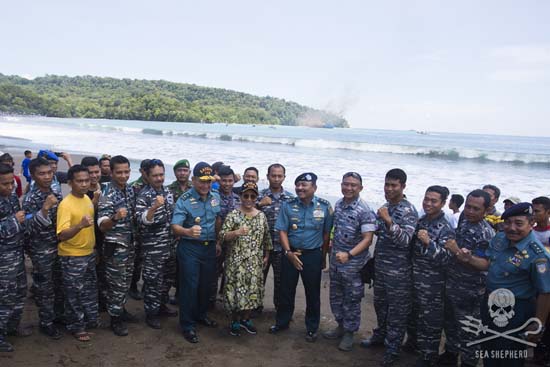 A show of strength from Fisheries Minister Susi Pudjiastuti, as the Viking sinks in the background. Photo: Gary Stokes 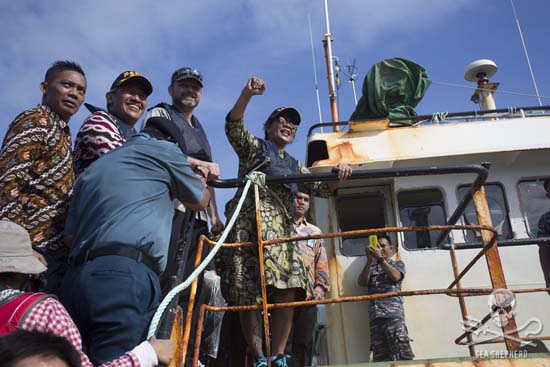 Indonesian Fisheries Minister, Susi Pudjiastuti, greets crowds and media on board the Viking, prior to its sinking. Photo: Gary Stokes 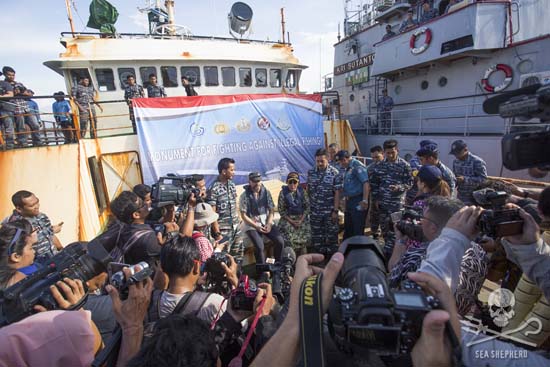