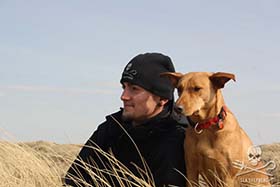 The Sea Shepherd volunteers were arrested on Monday morning following an attempted grindadráp – the infamous drive hunt of cetaceans in the Faroe Islands – just north of Klaksvík in the northeast of the island archipelago.

Faroese authorities have so far indicated that the Sea Shepherd volunteers will be charged under Section 9 of the Act. However, despite requests by their legal representative for more information, police have provided no further details as to the exact nature of the charges against the pair.

A court date has been set for this Thursday, July 23, at 0930 local time at Tórshavn.

Larsen, who was the driver of the Sea Shepherd small boat Farley at the time she was arrested, and Strerath, who was the boat’s navigator, are in the Faroe Islands as a part of Sea Shepherd’s 2015 Pilot Whale Defense Campaign, Operation Sleppid Grindini.

Operation Sleppid Grindini Land Team Leader, Rosie Kunneke, believes that the police’s inability to confirm details of the charges against Larsen and Strerath indicates that there is a of lack evidence of any wrongdoing by the pair.

“Faroese authorities are obviously keen to flex the muscle of their ramped-up laws, but as yet they have provided nothing in the way of evidence to support any claims against Susan and Tom,” said Kunneke.

The arrests occurred at approximately 0900 local time on Monday morning. The Sea Shepherd ship Sam Simon and the Farley had been investigating a flotilla of approximately 15 local boats that was on the move, heading north past the killing beach of Klaksvík. The Danish Navy vessel, HDMS Triton was also in the region. 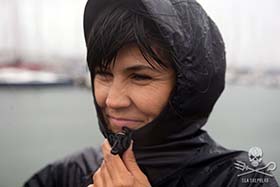 Susan Larsen of the San Francisco in the United States is facing up to 2 years imprisonment. Photo: Andrew CorrellThough the Sea Shepherd vessels could not see pilot whales in the area, the heightened activity is generally indicative of a pilot whale drive hunt.

Faroese police then boarded the small boat and arrested the two volunteers.

At the time the arrests were made, the Triton moved into position between the Sam Simon and the Farley, so that the small boat was not visible to the crew of the conservation ship. The Danish Navy vessel then confiscated the Farley, handing it over to the custody of Faroese police, where it is still being held.

Speaking about the incident, Larsen stated, “While I am frustrated by our arrests and the seizure of the Farley, I hope that this incident will bring attention to what is  happening to pilot whales and other cetaceans in the Faroe Islands. I was dismayed that our arrests were made with the assistance of the Danish Navy. This is a clear indication that Denmark, an anti-whaling nation, is not only complicit in the slaughter of whales - but is deeply invested in seeing that grinds are successfully carried out.”

For hundreds of years the people of the Danish Faroe Islands have been herding migrating pilot whales and other small cetaceans into shallow water and slaughtering them. The grindadráp is the largest slaughter of marine mammals in Europe, and is widely criticized as being both cruel and unnecessary.

Strerath stated, “While the rest of Europe protects pilot whales, in the Faroe Islands they continue to be slaughtered with the help of Denmark. I'm glad that our arrests have brought attention to the grindadráp, and I hope that my experience helps other EU nationals to take a stand against this barbaric tradition, which is taking place in our back yard.”

Captain Adam Meyerson of the Sam Simon has congratulated Larsen and Strerath on their handling of the ordeal. “Susan and Tom remained composed and focused during their arrest. I am proud of them for standing strong in the face of harassment by the Faroese police, while being accused of the ridiculous ‘crime’ of protecting marine mammals,” he said.

Sea Shepherd has been leading opposition to the grindadráp since the early 1980s.