In a Binding Decision Wednesday, the UK’s High Court Ruled Fish & Fish Ltd. Cannot Pursue Their Claim against Sea Shepherd in the UK 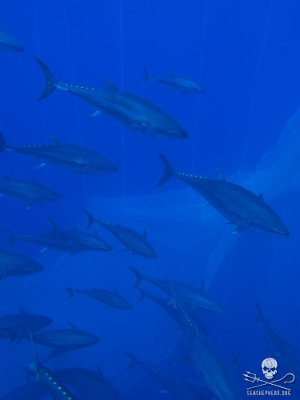 Escaping through the net
Photo: Sea Shepherd / Simon AgerOn Wednesday, March 4, the Supreme Court of the United Kingdom announced its decision in the case of Sea Shepherd UK vs. Fish & Fish Limited, a decision that brings a long-awaited victory for both Sea Shepherd and endangered bluefin tuna.

The Supreme Court's ruling, which is binding and cannot be appealed, holds that Sea Shepherd UK is not liable to Maltese fishing company Fish & Fish Ltd., and that consequently Sea Shepherd Conservation Society and Sea Shepherd Founder, Captain Paul Watson are not subject to English jurisdiction. The Court also restored an order that Sea Shepherd should receive £190,000 (approximately $290,000 USD) in respect of its legal costs in the Commercial Court within 14 days. Sea Shepherd's attorneys will be arguing that further legal costs exceeding £400,000 (approximately $610,000 USD) as well as a bond of some $800,000 USD should ultimately be returned to Sea Shepherd, and they will continue to pursue that matter. Wednesday’s victory comes after years of litigation that began in 2011.

In June 2010, the crew of Sea Shepherd’s Operation Blue Rage campaign freed approximately 800 bluefin tuna from the nets of a fishing operation in Libyan waters. The endangered fish were destined for a fish farm in Malta.

Sea Shepherd has always been clear in its view that the fish were illegally caught because the fish were obtained after the closing date of the fishing season; many of the fish in the pen were undersized juveniles; the fishing vessel did not have an inspector on board; and the captain refused to show Sea Shepherd any paperwork on the catch. As a result, Sea Shepherd sent divers into the water, who cut the nets and freed the hundreds of fish back to the open sea.

In July 2011, when the Sea Shepherd ship Steve Irwin was in Scotland preparing to depart for the Faroe Islands, the Scottish Court imposed a bond on the ship of £520,000 (approximately $790,000 USD) as surety, pending the outcome of the lawsuit brought by Fish & Fish Ltd. against Sea Shepherd Conservation Society, Sea Shepherd UK and Sea Shepherd Founder, Captain Paul Watson. In 2012, the court ruled in Sea Shepherd’s favor, but the decision was appealed in 2013.

The case was then heard by the UK Supreme Court in December 2014, and with Wednesday’s decision, the higher court has upheld the lower court’s ruling. Sea Shepherd applauds this binding decision from the court. As bluefin tuna are pushed further and further toward extinction, it is critical that illegal operations are not allowed to plunder the seas of these vital apex predators.

“This has been a long and tedious court battle but we have prevailed and this is a great victory for the bluefin tuna and against the poachers who are diminishing their numbers,” said Sea Shepherd Founder, Captain Paul Watson.

Sea Shepherd will continue to defend the oceans and the many imperiled species within from the deadly grasp of illegal fishing.

Watch the reading of the UK Supreme Court’s decision: