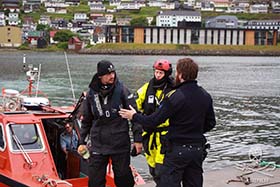 Sea Shepherd volunteer, Tom Strerath of Germany, is taken into custody. Photo: Florian StadlerTwo volunteer crewmembers from the Sea Shepherd ship, Sam Simon, have been arrested in the Faroe Islands.

Susan Larsen of the United States, driver of the small boat, Farley, and Tom Strerath of Germany, navigator of the same small boat, were arrested at approximately 0900 local time this morning.

The incident occurred following what is believed to have been an attempted grindadráp, just north of Klaksvík in the northeast of the island archipelago.

Shortly before the incident, the Sam Simon and the Farley were investigating a flotilla of approximately 15 local boats that was on the move, heading north past Klaksvík. The Danish Navy vessel, HDMS Triton was also in the region.

Though no pilot whales could be seen in the area by Sea Shepherd, the activity is generally indicative of a pilot whale drive hunt.

One of the small boats from the flotilla then approached the bow of the Sam Simon, moving southwards along the portside of the conservation ship, to its stern. The crew on board the small vessel threw a line in the propeller of the Sam Simon, intentionally disabling the Sea Shepherd ship. 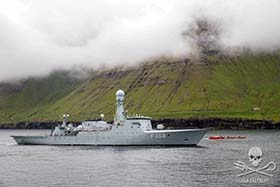 The Danish Navy vessel, HDMS Triton attempts to block the arrest of the Sea Shepherd crew from the Sam Simon. Photo: Iraultza IzquierdoAt this time, the Farley was approximately one nautical mile on the portside of the Sam Simon. It is understood that Faroese police boarded the small boat and arrested the two volunteers, and have since taken them to Klaksvík police station.

Sam Simon Captain, Adam Meyerson, requested confirmation from the Danish Navy as to whether the small boat crew had been arrested. The HDMS Triton responded, saying they were not “doing” police work, and advised Captain Meyerson to contact local police for further information.

Despite this comment, the Triton positioned itself between the Sam Simon and the small boat, so that the Farley was not visible to the crew of the Sam Simon.

Sea Shepherd Land Team Leader, Rosie Kunneke, contacted local police to inquire whether the pair had been arrested. Confirmation was given, with police saying that the arrest occurred because the Sea Shepherd crew was “inside the grind area.”

Captain Meyerson requested confirmation from the Danish Navy as to whether a grindadráp had been called, however no such confirmation was given at the time the request was made.

Captain Meyerson also requested confirmation as to whether the Triton had confiscated the small boat, Farley. Again, no confirmation was given, however Sea Shepherd believes that this was the case. 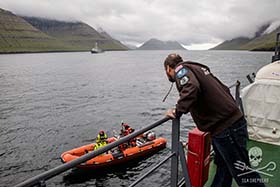 Captain Adam Meyerson informs the crew of the HDMS Triton’s RHIB that the Sam Simon’s propeller has been intentionally disable. Photo: Iraultza IzquierdoReports in local media indicate that local whale hunters had spotted and were attempting to drive a pod of pilot whales. However, it is believed that the pod escaped and a grindadráp did not eventuate.

Kunneke has confirmed that a legal representative has been brought-in to act on behalf of the arrested Sea Shepherd volunteers.

“Given there is no grindadráp it appears as though our crewmembers have been arrested for absolutely no reason. Police are remaining tight-lipped at the moment, but with no obvious reason for their arrest, we are hopeful that the pair will be released shortly,” said Kunneke.

Despite being an anti-whaling member nation of the European Union, subject to laws prohibiting the slaughter of cetaceans, Denmark continues to show its support for and collaboration with the Faroese whalers.

Sea Shepherd Land Team Leader, Rosie Kunneke, has received a report from the legal representative for Susan Larsen (United States) and Tom Strerath (Germany), following their arrest this morning in the Faroe Islands.

He has confirmed that both volunteer crewmembers are being charged under section (9) ‘Public Order Provisions’ of the Faroese Parliamentary Act No. 56 (the Pilot Whaling Act).

Section (9) states:
(1) Everyone who takes part in whaling at sea or on shore have [sic] a duty to obey requests, directions, order and prohibitions from a district administrator, a whaling foreman or another authorized person with powers conferred by the Parliamentary Act or an executive order issued under the authority of this Parliamentary Act to organize whaling and establish rules on public order in this connection.
(2) The provisions set out in subsection (1) moreover applies to persons who do not take part in the whaling as such but by their acts or failure to act, disturb, obstruct or prevent that the whaling may proceed as usual.

A court date has been set for this Thursday, July 23, at 0900 local time at Tórshavn.

The crewmembers have been released from custody until Thursday’s hearing.

Some of the crew’s equipment including helmets, go pros, cameras and the Farley itself, are being held by authorities. Operation Sleppid Grindini Land Team Leader, Rosie Kunneke, has lodged an official appeal against the confiscation of the equipment.

Tomorrow morning we will have more news of the official charges. 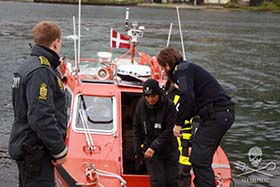 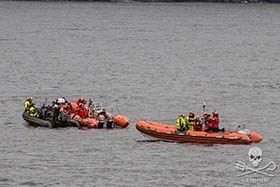