Tuna Battle off the Barbary Coast 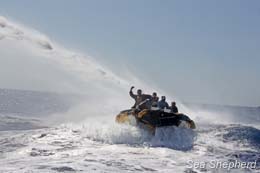 At 0600 hours, the Sea Shepherd vessels Steve Irwin and Brigitte Bardot approached a number of Tunisian-registered tuna seiners to inspect their operations.

The Sea Shepherd Conservation Society is searching only for illegal fishing operations.

“We are not here to protest legal fishing, we’re here to stop illegal fishing so any legal operation has no cause to be concerned about our presence in these waters,” said Captain Paul Watson.

It quickly became apparent that the seven vessels and two floating tuna cages were suspicious. The attitude of the fishermen was clearly hostile and they refused to answer if they had an ICCAT (International Commission on the Conservation of Atlantic Tuna) inspector onboard. They refused to allow an inspection of the cages.

At 0920 hours one of the fishing vessels radioed the French Navy and claimed that Sea Shepherd was attacking them and cutting their nets. This was absolutely not true. 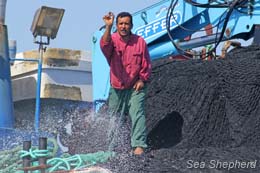 Angry fisherman shows metal link before hurling it at the Delta. Photo: Libby MillerAt 0925 hours the Tunisian seiner Tapus came close alongside the Steve Irwin and the crew began to hurl stones and steel chain links at the Sea Shepherd crew on deck.  The Sea Shepherd crew immediately responded with bottles of rotten butter that they smashed onto the decks of the seiner to force them to back off.

The Sea Shepherd Delta inflatable attempted to inspect the tuna cage but was attacked by two small boats throwing chunks of metal at the Sea Shepherd crew.

At 0940 hours a French naval jet flew over numerous times to document the situation.

At 1130 hours the seven seiners were joined by another seiner. All the vessels are flying a Tunisian flag. The vessels appealed to the French Navy for protection.