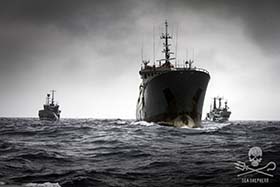 The Bob Barker and the Sam Simon in pursuit of the Thunder. Photo: Simon AgerThe Captain, Chief Engineer and Second Mechanic of the notorious poaching vessel, Thunder, have been charged with counts of pollution, reckless driving, forgery and negligence in São Tomé and Príncipe.

The charges were handed down in a local court on Friday following a three-month investigation into the events surrounding the sinking of the poaching vessel in the waters off the West African island state on April 6 this year.

Captain Luis Alfonso Rubio Cataldo of Chile, Chief Engineer Agustin Dosil Rey of Spain and Second Mechanic Luis Miguel Perez Fernandez, also of Spain,have been assigned residency and are not permitted to leave the country while they await trial.

At the time it sank, the Thunder had been the target of a 110-day, record-breaking continuous pursuit by the Sea Shepherd ship, Bob Barker.

The pursuit began when the conservation ship intercepted the poacher engaged in illegal fishing for vulnerable toothfish on the Banzare Bank, Antarctica; a region managed by the Commission for the Conservation of Antarctic Marine Living Resources (CCAMLR).

Sea Shepherd believes the Thunder was intentionally scuttled in an effort to hide its cargo of vulnerable toothfish, illegally caught in the CCAMLR managed region.

The Bob Barker, Captained by Peter Hammarstedt of Sweden, and fellow Sea Shepherd ship, Sam Simon, Captained by Sid Chakravarty of India, rescued the Thunder’s entire crew of 40, who all disembarked to life rafts before the vessel sank. 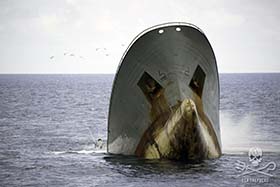 The most notorious of the poaching vessels, Thunder, sinks after being scuttled by its own captain and officers. Photo: Simon AgerBefore the Thunder was fully submerged, members of the Sea Shepherd crews were able to board the vessel and collect evidence from the sinking ship, including a frozen toothfish, that was later handed over to police.

Captains Hammarstedt and Chakravarty reported details of the incident and rescue operation to authorities, including international policing organization, Interpol. As a result of this information, the entire crew of the Thunder was detained on arrival in São Tomé and Príncipe, where the Captain and two Officers have been held ever since.

Captains Hammarstedt and Chakravarty have congratulated all involved in the investigations, particularly authorities in São Tomé and Príncipe.

When Operation Icefish began, we promised that we would drive these poachers out of the shadowlands of the Southern Ocean and into the hands of justice. Thanks to cooperation from a network of international law enforcement, and authorities in São Tomé and Príncipe who spearheaded investigations into the Thunder, that promise is now realized,” said Captain Hammarstedt.

The São Tomé and Príncipe authorities have shown great commitment towards delivering justice in the case of the Thunder,” said Captain Chakravarty. Starting with the reception that the crew of the Thunder received when they were landed in São Tomé and Príncipe by the Sam Simon, to following up with the statements registered in Germany by Sea Shepherd, to now formally charging the officers in their local court, the authorities have proven that commitment and cooperation are the tools to tackle international fisheries crimes. Spanning four oceans, six countries and multiple nationalities, the success of Operation Icefish continues."

The Thunder is the most notorious of six vessels, which Sea Shepherd calls the Bandit 6”, that have been blacklisted for illegal, unreported, unregulated (IUU) fishing of vulnerable toothfish in the Southern Ocean.

The Bandit 6 were the target of Sea Shepherd’s most recent Southern Ocean Defense Campaign, Operation Icefish, which commenced in December 2014.

The campaign, Sea Shepherd’s 11th in the waters of Antarctica, has been instrumental in shining a spotlight on the outlawed poaching operators and brining a halt to their illegal fishing activity.

Since the launch of Operation Icefish, all six of the outlawed vessels have been located and are now out of action and several investigations are currently underway into the illegal activity of those vessels. 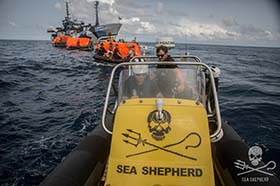 Sea Shepherd crews rescue the crew of the Thunder after the abandoned their sinking ship. Photo: Jeff Wirth 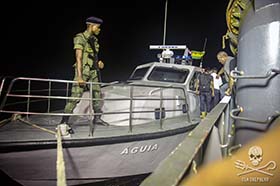