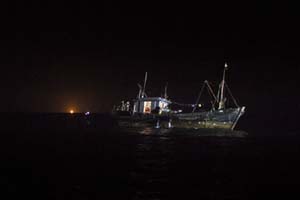 The arrests followed a successful night raid on the illegal vessels in the early hours of Sunday morning. Photo: Denis SinyakovThe crew of the Sea Shepherd ship, Bob Barker, has assisted Gabonese authorities in the arrest of three illegal fishing trawlers in coastal waters off Gabon, Central West Africa.

The arrests followed a three-day coordinated effort between the Marine Nationale (Gabonese Navy), the ANPA (Fisheries Enforcement Agency) and Sea Shepherd that culminated in a successful night raid on the illegal vessels in the early hours of Sunday morning.

At the time they were intercepted the three Congo-flagged trawlers were actively engaged in illegal fishing inside Gabon's territorial waters and Exclusive Economic Zone, after crossing the border from the Republic of Congo (Congo). One of the vessels was also inside the Mayumba National Park limit, a marine protected area on the border of Gabon and Congo, six nautical miles off the Gabonese coast.

“Under the cover of darkness we launched two small boats with armed boarding teams from the Gabonese Navy and Fisheries Enforcement Agency, assisted by the Marine Nationale's riverine patrol boat (RPB), the MV Mayumba.

“Whilst Gabonese officials boarded the first fishing vessel and gained control, the Sea Shepherd crew remained alongside, lighting up the fishing vessel's decks and documenting its activities. Boarding teams then secured the second and third illegal vessels, one of which was running at 8 knots at the time it was boarded.

"All three vessels have been handed over to local authorities in the port of Mayumba to commence further investigation and the necessary legal proceedings.”

The three illegal fishing trawlers, with crew of several different nationalities including Chinese and Congolese nationals, are the first arrests undertaken as a part of Operation Albacore, a joint campaign between Sea Shepherd and the Government of Gabon.

Launched in April, Operation Albacore will tackle illegal, unregulated and unreported (IUU) fishing, under the direction of the Government of Gabon.

Throughout the 2016 tuna fishing season, Marine Nationale and officers with the ANPA will be stationed on-board the Bob Barker, working alongside Sea Shepherd crew to patrol Gabon's sovereign waters.

The patrols will provide a vehicle for law enforcement to defend, conserve and protect critical tuna habitat in the region through to September 2016.

Sea Shepherd Operation Albacore Campaign Leader, Captain Peter Hammarstedt, said, “The hugely successful commencement of the campaign demonstrates the strength of the cooperative effort between Gabonese state authorities and Sea Shepherd. We are immensely proud of this collaboration, which has resulted in this victory for conservation law and for the oceans.” 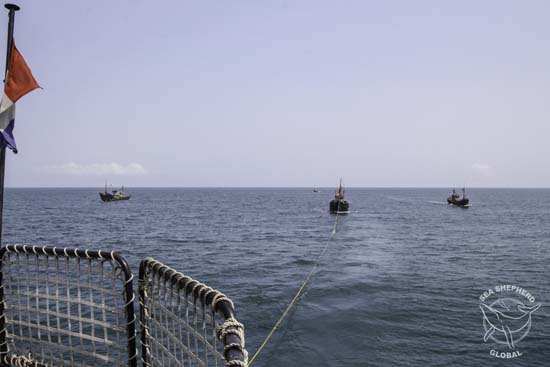 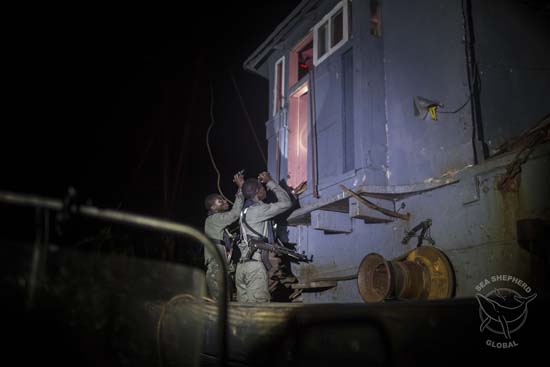 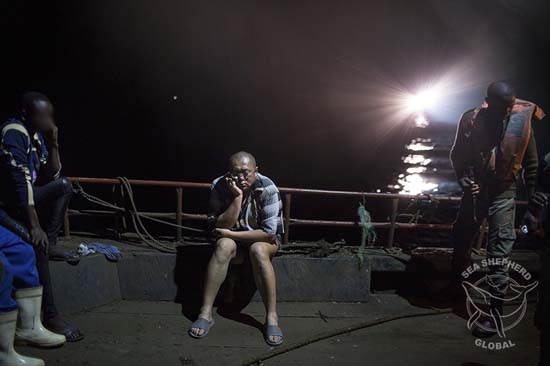 The despondent captain of one of the illegal trawlers following their arrest on Sunday. Photo: Denis Sinyakov