The Sam Simon Arrives In The Faroe Islands 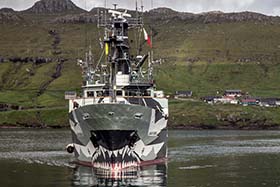 The Sam Simon joins fellow Sea Shepherd ship, the Australian-registered Brigitte Bardot, and a land team of volunteers from around the world, for the organization’s 2015 Pilot Whale Defense Campaign, Operation Sleppid Grindini.

Three Customs Officers boarded, inspected and cleared the Sam Simon on arrival, without issue. Local police were also at Sund to meet the Sea Shepherd ship, but did not board.

Captain Lockhart MacLean of Canada reports, “We received a very courteous clearance from customs and our agent has been very helpful. We look forward to being in the Faroe Islands."

Sea Shepherd has been opposing the infamous drive hunt of cetaceans in the Faroe Islands, known as the grindadráp or grind, since the early 1980s.

The grindadráp is largest slaughter of marine mammals in Europe, and is widely criticized for being both cruel and unnecessary.

Each grind is a drawn-out process that begins when the targeted whales and dolphins are chased and harassed by a flotilla of small boats from the sea into shallow water. 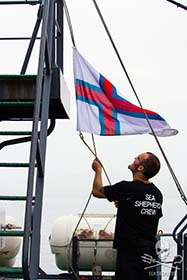 The courtesy flag is raised as the Sam Simon heads into Sund. Photo: Nik TsoutsosDistressed animals beach themselves or are dragged to shore by their blowholes with gaff hooks (blásturkrókur). The animals are then slaughtered in front of family members, with records indicating that death can take up to four minutes.

For these cetaceans, whose intimate family relationships and capacity to suffer is well documented, the grindadráp delivers a lengthy, harrowing and traumatic death. In addition to any physical pain, the whales also suffer trauma from the moment the drive hunt begins, right up until the time of death.

Then on June 29, a second slaughter occurred on Hvannasund in the north of the island archipelago. Sea Shepherd volunteers on the ground were able to capture graphic video and photographs of the slaughter of a pod of 22 pilot whales.

Land Team Leader, Rosie Kunneke, was on the ground during the aftermath of the Hvannasund slaughter. “The grindadráp is cruelty dressed-up as culture. In this day and age, it is simply no longer acceptable to use tradition as an excuse to inflict pain and suffering on another,” she said.

Operation Sleppid Grindini is Sea Shepherd’s sixth campaign in the Faroe Islands, led by the organization’s strongest at-sea presence in the region to date. 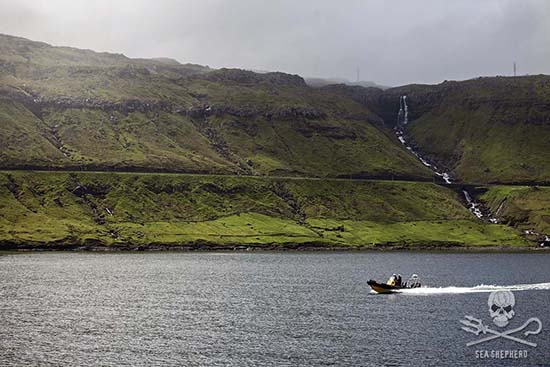 The bloody slaughter of the grind is a stark contrast to the natural beauty of the Faroe Islands. Photo: Enric Gener