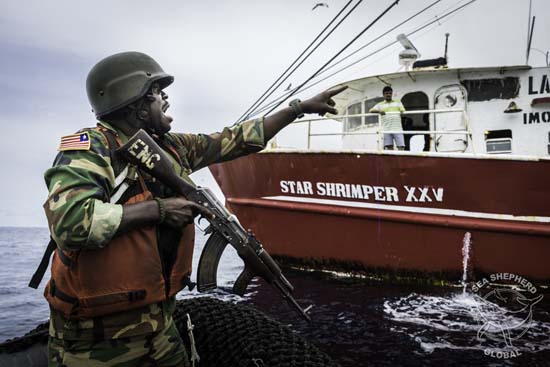 Liberian Coast Guard prepares to board the Star Shrimper XXV. Copyright Alejandre Gimeno/Sea Shepherd Global On March 13th the Nigerian-flagged fishing vessel (F/V) Star Shrimper XXV was boarded in waters belonging to the West African state of Liberia by the Liberian Coast Guard, assisted by Sea Shepherd crew and Israeli maritime advisors and conservationists.  The vessel was actively fishing without a Liberian fishing license, the most serious offense under the Liberian Fisheries Regulations, for which the penalty can be a fine up to one million United States dollars (USD 1,000,000).

The trawler was detected by radar as it entered Liberian waters from the waters of Cote d’Ivoire at a speed that indicated trawling activity. A Liberian Coast Guard boarding team quickly mobilized on board the Sea Shepherd vessel M/Y Bob Barker  and proceeded to the target, where the vessel was discovered actively fishing with its trawling gear in the water.

The Star Shrimper XXV is part of a fleet of fishing vessels owned by Atlantic Shrimpers Ltd that is certified by the US Department of State to export shrimp to the United States because of the use of measures to reduce by-catch including turtles. Shrimp is also exported worldwide by Primstar B.V., a company in The Netherlands. The fleet is currently certified under "Friend of the Sea" criteria for sustainable fishing of Black Tiger Prawns (www.primstar.com/fishing.php), however the guidelines require vessels to comply with legal requirements including valid fishing permits (www.friendofthesea.org).

“It is not without irony that while the Star Shrimper XXV had by-catch limitation devices like Turtle Excluder Devices (TED) on board (which they were not using during the time of their arrest), they deliberately entered Liberian waters to fish illegally without a license. Had it not been for the intervention of the Liberian Coast Guard and Sea Shepherd, the illegal catch of the Star Shrimper XXV would have been sold in American and European markets as ‘sustainably-certified’.  Sea Shepherd Global urges the United States Department of State to seriously review their import agreement with Atlantic Shrimpers Limited”, said Campaign Leader Peter Hammarstedt.

Since February 2017, under the name Operation Sola Stella, Sea Shepherd has been assisting the Government of Liberia to tackle illegal, unreported and unregulated (IUU) fishing by providing the use of the M/Y Bob Barker as a civilian offshore patrol vessel operating in Liberian waters, under the direction of the Liberian Ministry of National Defense. The patrols have thus far resulted in the arrest of four IUU fishing vessels. Developing countries are particularly vulnerable to IUU fishing, which accounts for up to 40% of the fish caught in West African waters.

“Since the outset of the Liberian Ministry of National Defense’s cooperation with Sea Shepherd, I have stated that the time for illegal fishing is over. With the arrest of four IUU fishing vessels in such a short period of time, the Liberian Coast Guard is executing my zero tolerance policy on illegal fishing, taking back our seas from poachers who have come in to our waters for too long”, said Honorable Minister Brownie Samukai, Minister of National Defense for Liberia.

In 2016 Sea Shepherd partnered with the government of Gabon for Operation Albacore, resulting in over 40 fishing vessel inspections at sea and the subsequent arrest of three IUU Congolese fishing trawlers and one Spanish long-liner. Operation Sola Stella is a continuation of Sea Shepherd Global’s commitment to work with national governments to help end IUU fishing. 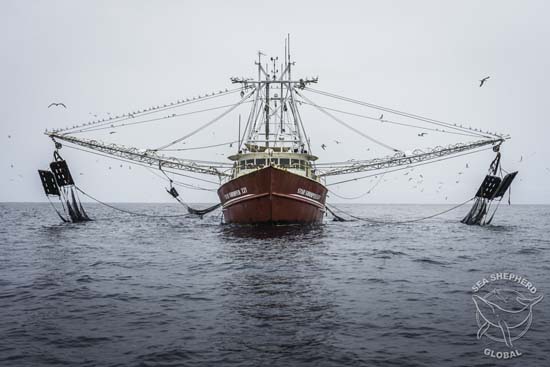 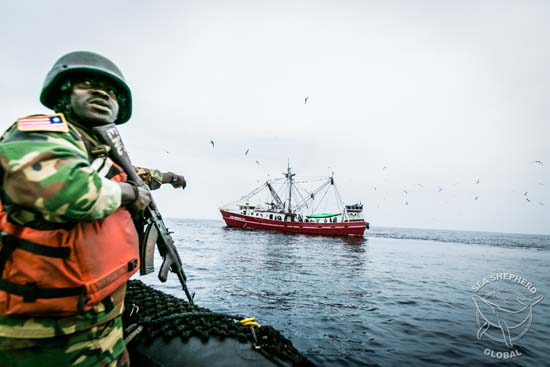 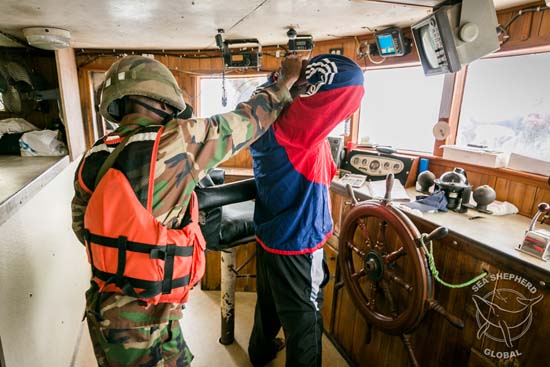 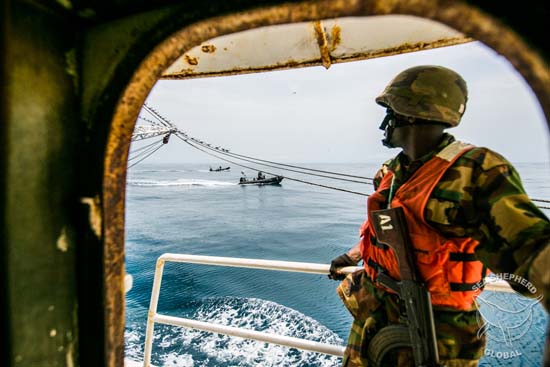