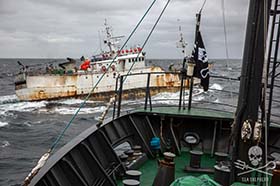 The Sam Simon chases the Kunlun out of its hunting grounds in the Southern Ocean. Photo: Jeff WirthYesterday, the Spanish government announced that it has issued fines that could reach up to €11 million to Spanish nationals and companies involved in Illegal, Unreported, Unregulated (IUU) fishing in the Southern Ocean.

The penalties have been issued as the result of a new offensive from the Spanish government, dubbed Operation Sparrow, which targets Spanish interests in IUU fishing.

They are the highest known fines imposed by a European Union (EU) government, and the first ever of its kind relating to IUU fishing.

Operation Sparrow sprang to life in March this year when Spanish authorities raided several premises in the province of A Coruña, Spain. One of the properties raided was the former headquarters of Vidal Armadores, a Spanish fishing company with an extended history of links to IUU fishing for Patagonian and Antarctic toothfish in the Southern Ocean.

Sea Shepherd believes the family-operated Vidal Armadores to be the primary target of the most recent, record-breaking penalties.

The vessels are three of six active IUU fishing vessels, which Sea Shepherd calls the “Bandit 6”, that have been blacklisted for poaching vulnerable toothfish. The Bandit 6 have been the target of Sea Shepherd’s most recent Southern Ocean Defense Campaign, Operation Icefish, led by Captains Peter Hammarstedt and Sid Chakravarty.

Operation Icefish has been instrumental in shining a spotlight on the outlawed poaching operators and brining a halt to their illegal fishing activity. In February, the Yongding and Kunlun were intercepted by the Sea Shepherd ship, Sam Simon, inside Australia's Exclusive Economic Zone. The Sam Simon then engaged in a pursuit of the Kunlun, chasing it out of its hunting grounds. The vessel was later detained by authorities in Thailand.

Then in May, following a remarkable set of chance circumstances, the Songhua and Yongding were detained in Cabo Verde, thanks to intelligence provided to authorities by Sea Shepherd.

Since the launch of Operation Icefish, all six of the outlawed vessels have been located and are now out of action. Several investigations are currently underway into the illegal activity of the vessels. 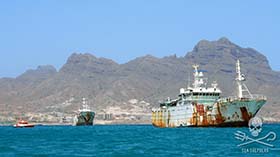 The Yongding and the Songhua at Mindelo, Carbo Verde. Photo: Josephine WatmoreThe recent penalties dealt by the Spanish government are the first to target the operators behind the illegal vessels.

“This is an incredibly encouraging development in the battle against IUU fishing, and a sure sign that governments of the world are no longer willing to tolerate high-seas criminals. We commend the Spanish authorities for this historic development and commitment to bringing these poachers to justice,” said Captain Hammarstedt.

“When we embarked on Operation Icefish, many doubted that we would have success. Seven months later, not only are all six of the vessels targeted in the campaign out of action, but the criminal syndicates that have hidden behind these poaching operations are also being exposed and prosecuted. This is an incredible result for Sea Shepherd and for the oceans,” said Captain Chakravarty.

Operation Icefish was Sea Shepherd's 11th Southern Ocean Defense Campaign, and the first to target IUU fishing operators in the waters of Antarctica.