The Viking is the 2nd of the “Bandit 6” poaching vessels to be detained this month.
(Image courtesy CCAMLR)Another major blow has been dealt to illegal fishing in the Southern Ocean with the detention of the Nigerian flagged poaching Vessel, Viking, in Malaysia.

Held for violations of Malaysian maritime law, Malaysian authorities have indicated that the Viking will also be investigated for alleged illegal, unregulated, unreported (IUU) fishing violations.

The vessel was detained with 18 crew on board; one Chilean, two Peruvian and 15 Indonesian citizens. The Captain of the vessel, whose nationality is unknown, has been arrested.

The Viking is one of the six remaining illegal, unregulated, unreported (IUU) fishing vessels – which Sea Shepherd calls the “Bandit 6” - that are known to target vulnerable toothfish in the waters surrounding Antarctica, and is the second vessel of the six that has been detained by authorities this month.

The Sea Shepherd ship, Bob Barker, is currently engaged in a record-breaking pursuit of the most notorious of the “Bandit 6” vessels, the Thunder, which prior to it being stripped of its registration last week, was also flagged to Nigeria.

The Viking, like its five counterparts, has a long history of illegal fishing. In 2013, the vessel, then called Snake, was the first vessel to be issued with an Interpol Purple Notice for fishing-related violations following a petition from authorities in Norway. The owners and operators of the vessel are suspected of violating national laws and regulations, as well as international conventions by engaging in fraud and fisheries-related crimes.

While Sea Shepherd applauds the detention of the Viking, the organisation is now appealing to relevant authorities to ensure that the owners and officers of the vessel are prosecuted, the vessel scrapped and its catch confiscated.

The Viking (Image courtesy CCAMLR)Captain of the Bob Barker, Peter Hammarstedt said, “In May 2014, the Thunder was detained in Malaysia. Despite being found guilty of illegal fishing activity, the vessel was let off with a small fine and allowed to return to its illegal operations. Seven months later, my crew and I intercepted the Thunder on the Banzare Bank in Antarctica, again engaged in illegal fishing activity. These are seasoned, repeat offenders who will not be deterred by a slap on the wrist. The only way to ensure that the Viking does not return to pillage the Southern Ocean is for the vessel to be impounded, and for the operators and officers to be arrested for their crimes.”

In addition to fishing crimes, Sea Shepherd is calling upon Malaysian authorities to investigate possible human rights violations on board the Viking.

Captain Sid Chakravarty of the Sea Shepherd ship, Sam Simon, said, “Last week, Sea Shepherd reported the attempted suicide of an Indonesian crewmember on board the poaching vessel, Thunder. We have sought the advice of human rights experts who have indicated that the suicide attempt was all in likelihood directly related to the poor and exploitative conditions experienced on board that poaching vessel. In light of this, and the extensive body of information which indicates that a rampant slave trade underpins IUU fishing operations, we implore Malaysian authorities to speak to the 15 Indonesia crew on board the Viking, and to thoroughly investigate the likelihood that human rights violations have taken place.” 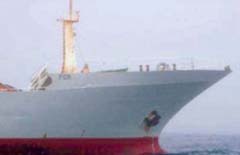 Authorities indicate the Viking will be investigated for alleged IUU fishing violations.
(Image courtesy CCAMLR)In further news, Thai authorities have confirmed that the Captain of the poaching vessel Kunlun, which was chased from its hunting grounds inside Australian waters by the Sam Simon in February, has been charged for falsely reporting its illegal catch of 182 tonnes of Antarctic toothfish as grouper. Captain of the poaching vessel, Jose Alberto Zavaleta Salas, faces further charges for falsely reporting the ship’s flag and registration.

The handler that received the fish, South Services Co Ltd, has also been charged for its role in illegally importing the fish into Thailand.

Captain Chakravarty has praised international policing organisation, Interpol, for their efforts in spearheading the investigations into the Viking, Thunder and Kunlun.

“All three of the vessels that are currently being investigated have been issued with Interpol Purple Notices. By doing so, the Environmental Crime Unit’s Project Scale has set in motion the wheels to bring together international cooperation to tackle poaching in the Southern Ocean. Under their expertise, national investigators now have the chance to investigate fisheries crimes to bring about successful prosecutions of these vessels. From the waters of West Africa to the shores of Mauritius and now the ports of Thailand and Malaysia, Interpol is leading the proceedings to shut down these poachers,” he said.