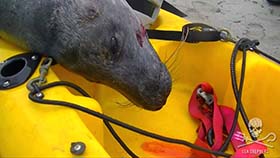 In 2012 Kuiper was rescued by the Scottish Society for the Prevention of Cruelty to Animals (SSPCA). Just a pup at the time, Kuiper was found with a dangerous eye ulcer, but was nursed back to health and successfully released back into the wild.

On June 20 this year, volunteer crew on Sea Shepherd UK’s Seal Defence Campaign in Scotland discovered a seal that had been shot through its muzzle. Visible entry and exit wounds suggested it was not a clean kill

The slaughtered seal had a flipper tag number 72976, which has now been identified with help from the SSPCA.

Colin Seddon, Manager of the SSPCA National Wildlife Rescue Centre at Fishcross in Alloa, has provided Sea Shepherd UK with the following information:

"Seal 72976 was first found on Tyninghame beach Lothian, high on the beach with an ulcer in his left eye which cleared up in our care. He was a struggling pup and arrived at 15.6kg. We released him at Silver Sands beach Aberdour on the 29th May 2012 at a healthy 29kg …The seal had been named 'Kuiper' while being cared for by us at the SSPCA Wildlife Rescue Centre.”

Sea Shepherd UK crew are saddened by the news that the seal’s life has been taken just to protect profits.