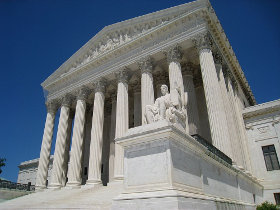 The United States Supreme Court
Photo courtesy Wikimedia CommonsSea Shepherd USA, a U.S.-based 501(c)(3) non-profit marine conservation organization, filed a petition yesterday asking the U.S. Supreme Court to review an appellate decision holding it in contempt of court based on the activities of foreign groups that opposed illegal Japanese whale hunts. (The petition is available at: Petition for Writ of Certiorari).

“Any business that operates internationally should be alarmed by the ruling at issue here,” said Claire Davis, a partner with Lane Powell, the law firm representing Sea Shepherd at the Supreme Court. “This case isn’t specific to whaling, but instead raises fundamental questions about how aggressively U.S. courts can interfere in the foreign affairs of U.S. businesses.”

Sea Shepherd seeks review of a Ninth Circuit Court of Appeals decision, finding that it violated an injunction to remain at least 500 yards away from Japanese whaling vessels in the Southern Ocean Whale Sanctuary near Antarctica. The Ninth Circuit asserted jurisdiction over Sea Shepherd through the Alien Tort Statute, a federal statute intended to allow foreign citizens to bring actions in U.S. courts for violations of a small number of universally recognized international laws, usually understood to include acts such as genocide and torture.

“The Alien Tort Statute is meant to apply in a very narrow set of circumstances, which do not include environmental activism,” said Davis. “This decision authorizes U.S. courts to invent new international law and apply it to the activity of all U.S. businesses abroad. It sets a welcome mat in front of the U.S. courts for any plaintiffs’ lawyer or foreign actor wishing to attack a U.S. business, based on grudges arising anywhere across the globe.”

The legal dispute arises from Japan’s long-running violation of the International Whaling Commission’s (IWC’s) ban on commercial whaling. Since the 1980s, Japan has granted Scientific Research Permits for Japanese organizations to kill more than 1,000 whales in the Southern Ocean Whale Sanctuary each year, including humpback whales and endangered fin whales. Last year, the International Court of Justice declared Japan’s research rationale to be a sham, and said that its whale hunts are in violation of international law. Sea Shepherd’s campaign to stop Japanese whale hunts has been documented in the Emmy-nominated Animal Planet series “Whale Wars.”

Japanese whaling has been the subject of consistent condemnation by the U.S., foreign governments, IWC, and scores of environmental groups. When Japan first began violating the moratorium against whaling, President Ronald Reagan responded by ordering the Secretary of State to suspend Japan’s fishing privileges in U.S. waters.

Sea Shepherd’s petition takes exception to two rulings by the Ninth Circuit—its issuance of the original injunction, through which it accuses Sea Shepherd of piracy under international law, and its finding that Sea Shepherd violated that injunction. Both rulings reversed prior decisions in favor of the conservation organization. In 2012, a federal District Court in Washington state issued a 44-page opinion denying the request for an injunction against Sea Shepherd by the Institute of Cetacean Research, a Japanese whaling group; in 2014, after an eight-day hearing, a special master recommended the Ninth Circuit find that none of the defendants had violated the injunction.

Sea Shepherd’s bid for review before the Supreme Court raises two legal questions: (1) whether the Alien Tort Statute provides jurisdiction for an injunction regulating otherwise legal behavior in international waters, under a new norm of international law created by U.S. judges; and (2) whether a federal court can use its contempt power to punish a party for violating the spirit of an injunction, although it adhered to its express terms.

“The Ninth Circuit held Sea Shepherd to be committing piracy under international law, despite the fact that Sea Shepherd had been engaged in a non-violent campaign to halt illegal whaling in an established sanctuary. Then the court found Sea Shepherd to be in contempt, even though it concedes Sea Shepherd had complied with the terms of the injunction,” said Davis. “But these rulings are not really about piracy or whaling. They are about the ability of the federal courts to exercise unrestrained power, without authority from Congress, over what the law says, and how and where it can be enforced.”