Sea Shepherd, The Wilderness Society take the fight for the Bight to BP’s doorstep. 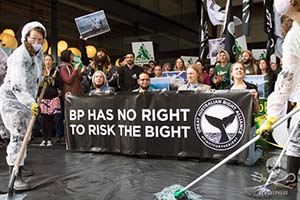 Jaxon Barnes and Peter Owen of The Wilderness Society, Mirning elder Uncle Bunna Lawrie, and Nelli Huié of Sea Shepherd Australia at the Melbourne protest. Photo: Aaron StevensonCoordinated protests in Australia and the United Kingdom took place as BP’s shareholders met, with a mock oil spill held at the organisation’s head office in Melbourne, and a giant inflatable whale installed outside the AGM in London. The protests were held in opposition to BP’s plans to drill for oil in the Great Australian Bight. Celebrity supporter Clive Standen of hit TV series Vikings attended the London event to show his support.

"We have come to the annual general meeting to tell BP it has no right to risk the pristine waters of the Great Australian Bight, and that the opposition to its plans is growing in Australia and around the world." said Wilderness Society National Director Lyndon Schneiders. “This fight is the southern hemisphere’s equivalent of stopping Shell drilling in the Arctic.”

BP was responsible for the world’s biggest oil spill accident, the Deepwater Horizon tragedy in 2010, when 800 million litres of oil spewed into the Gulf of Mexico for 87 days.

"BP totally screwed up in the deep waters of the Gulf of Mexico," said Sea Shepherd UK Chief Operations Officer Rob Read. "Now BP wants to drill in the deeper, more treacherous and more remote waters of the Great Australian Bight. BP’s plan is insanity and poses a grave danger to this precious marine area and its rare species."

Mr Schneiders said: "BP has already shown it has not learnt anything from its Gulf of Mexico disaster. Australia’s offshore oil and gas authority, NOPSEMA, rejected BP’s first application to drill in the Bight and had said BP needs a comprehensive risk assessment and oil pollution emergency plan. The Australian Parliament’s Senate is so concerned about BP’s plans it has launched an inquiry, backed by the Labor Party, possibly Australia’s next government after the general election this year."

Sea Shepherd Australia Managing Director Jeff Hansen said: "The Great Australian Bight is a global marine treasure. The Bight’s pristine waters are a haven for whales, boasting the world’s most important southern right whale nursery as well as many humpback, sperm, blue and beak whales. These are the same whales we fight so hard to protect from slaughter in the Southern Ocean." 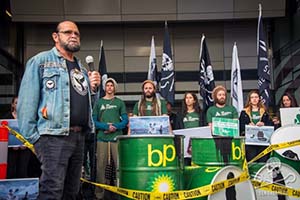 Bunna Lawrie, an elder of the Mirning people, Traditional Owners of the Bight. Photo: Glenn Walker"The Bight is Australia’s most important sea lion nursery. It also supports dolphins, seals, orcas, great white sharks, some of Australia’s most important fisheries, and magnificent birds such as the albatross and the white-bellied sea eagle. The Bight is littered with state and federal marine parks. One of BP’s leases even takes in a Commonwealth marine reserve."

"The Great Australian Bight is backed by the longest line of sea cliffs in the world, stretching hundreds of kilometres and reaching 60 metres high, the height of a 20-storey building, making it even more difficult for any clean-up operations if there was a spill."

Bunna Lawrie, an elder of the Mirning people, Traditional Owners of the Bight, said: "My ancestors and I have looked after the whale, the land and the sea for 50,000 years. We don’t want BP in our sea and our place of the whales. We don’t want pollution causing destruction and poisoning our sea and land. I can not allow BP to drill for oil in the Great Australian Bight. As a Traditional Owner, I do not want my home, my tradition destroyed and lost forever." 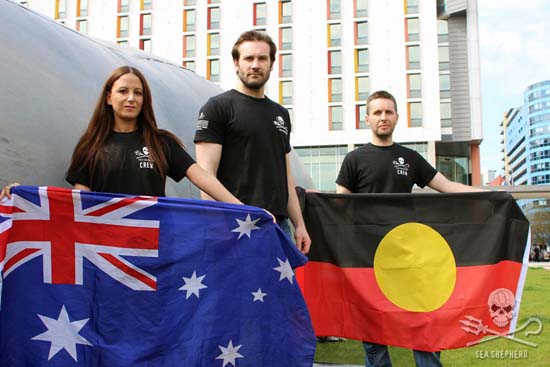 Clive Standen from hit TV series ‘Vikings’ lent his support to the fight to save the Bight. Photo: Sea Shepherd UK 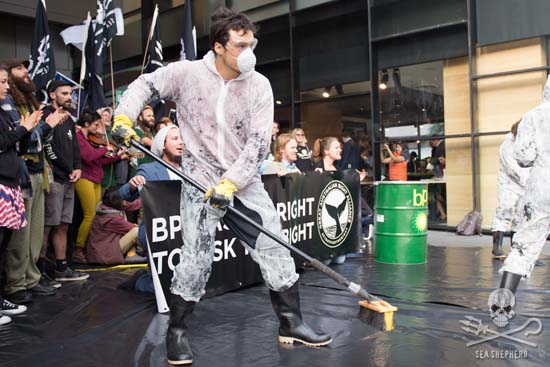 A mock oil spill was staged in the main entrance to BP’s head office in Melbourne. Photo: Aaron Stevenson

Protesters outside The ExCeL centre in London where BP’s AGM was being held. Photo: Sea Shepherd UK

Opposition to BP’s plans to drill for oil in the Great Australian Bight is growing globally. Photo: Sea Shepherd UK