A small boat from the Sea Shepherd ships escorts a pod of white-sided dolphins
away from the Faroe Islands killing beaches. Photo: Ayehsha Dsouza

Over the past three months, the Sea Shepherd ships Brigitte Bardot, Sam Simon, and more recently the Bob Barker, in collaboration with the Sea Shepherd land crew, have successfully escorted hundreds of dolphins, including pilot whales, away from the killing beaches of the Faroe Islands.

This week alone pods of pilot whales, white-sided dolphins, white-beaked dolphins and bottlenose dolphins have been led away from the shores of the archipelago by the Sea Shepherd ships. These species are four of the six that, according to local regulations, can be targeted for slaughter in the infamous drive hunt known as the grindadráp.

All of the pods were located close to the islands’ shores and, as such, were at high risk of being spotted by locals and reported to authorities for slaughter. 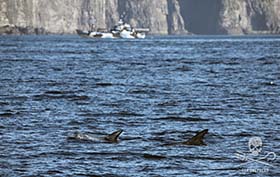 The Bob Barker positions itself between a pod of Risso’s dolphins and the shoreline of the Faroe Islands. Photo: Victoria SalançonCEO of Sea Shepherd Global, Captain Alex Cornelissen stated, “Our crews are under constant watch by authorities in the Faroe Islands, including the Danish navy ships and helicopter. It’s incredibly difficult to undertake these kinds of exercises without detection, but we have had huge successes in leading these pods of dolphins and pilot whales away from the killing beaches and out of harm’s way.”

A pod of Risso’s dolphins was also escorted to open sea last Wednesday. While this species is not listed as a target species, grindadráp records indicate that Risso’s have been targeted for slaughter in the past. Most recently in 2010, 21 Risso’s dolphins were slaughtered on the killing beach of Hvalba in the south of the archipelago.

However, in the Faroe Islands, a protectorate of Denmark, the slaughter of pilot whales and other small cetaceans continues with the assistance of the Danish police and navy, and with the blessing of the Danish government.

“Throughout this campaign, we have highlighted time and time again that the Danish government’s on-going support of the grindadráp is in breach of its international legal obligations and EU responsibilities. While Denmark continues to try to silence Sea Shepherd’s opposition to the slaughters, our crews remain focused on the job at hand: defending the dolphins and whales that are still under threat in the Faroe Islands,” said Captain Cornelissen.

Sea Shepherd crews are currently in the Faroe Islands for the organization’s sixth pilot whale defense campaign, Operation Sleppid Grindini, which is scheduled to conclude at the end of this month.

Please help us restore and strengthen our fast boat fleet by donating generously to our appeal so we can continue to defend whales and dolphins! 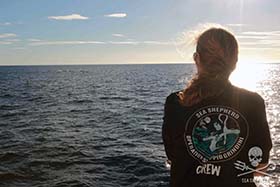 Capt. Wyanda Lublink watches over a pod of dolphins as Sea Shepherd leads them safely back out to open sea. Photo: Sea Shepherd 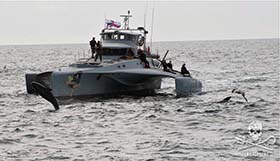 File: Sea Shepherd has been protecting dolphins of the Faroe Islands since the early 1980s. Photo: Sea Shepherd