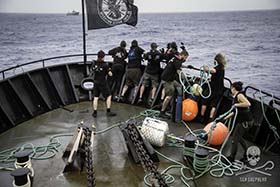 The crew of the Bob Barker recovery the buoy set marks, preventing the Thunder from shooting the rest of the net. Photo: Simon AgerThe Sea Shepherd ship, Bob Barker, has successfully shut down another attempt by the Interpol-listed poaching vessel, Thunder, to poach in the waters of the Melville Bank in the southwest Indian Ocean.

The incident began at approximately 0240 AEDT today, when the captain of the Thunder radioed the Bob Barker to notify of his intent to recommence fishing.

Captain of the Bob Barker, Peter Hammarstedt, responded to the call, notifying the Thunder that their attempts to fish were illegal, and that the crew of the Bob Barker would obstruct their illegal fishing activity by cutting their gillnets, should the Thunder attempted to deploy them.

At 0256 AEDT, the Thunder deployed a buoy set, marking the beginning of the gillnet. The Thunder then headed in an easterly direction away from the buoy set, to run-out the net.

As soon as the buoys were on board the Bob Barker, the Thunder retrieved their severed net and turned their fishing lights off, indicating they had suspended their poaching operations. 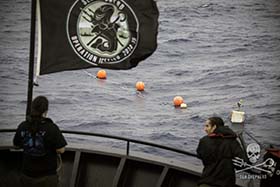 The buoy set marks the beginning of the Thunder's gillnet. Photo: Simon Ager“These gillnets are marked at either end by a set of buoys, which serve to indicate the position of the buoys, and also to keep the nets in place. By confiscating one of the buoy sets, we have effectively prevented them from shooting the rest of the gillnet, thereby shutting down this latest attempt by the Thunder to poach fish,” said Captain Hammarstedt.

On seeing the Bob Barker crew retrieve the buoy set, the captain of the Thunder again radioed the Bob Barker, telling the conservation ship that they were coming to get their fishing gear “either the easy way or the hard way. You have declared war on us.”

The Thunder then pursued the Bob Barker for approximately two hours before stopping. The Bob Barker also stopped and both vessels are currently drifting.

A wanted poaching vessel, the Nigerian flagged Thunder was issued with an Interpol Purple Notice in 2013 for suspected illegal fishing activity, following a joint effort by New Zealand, Australia and Norway. The Thunder is also on the Commission for the Conservation of Antarctic Marine Living Resource's (CCAMLR) black list of illegal fishing operators.

Interpol records indicate that, over the past ten years, the Thunder has operated under several different names and “flags of convenience” in order to avoid the detection of illegal fishing activity. In 2013, Australian Fisheries Management Authority reported that a regional strike force denied Thunder port access in Penang, Malaysia, and Bali after it tried to offload millions of dollars worth of illegal catch.

The Thunder is one of the “Bandit 6” outlaw poaching vessels, known to target Antarctic and Patagonian toothfish in the Southern Ocean, that are the focus of Sea Shepherd's current Southern Ocean Defence Campaign, Operation Icefish.