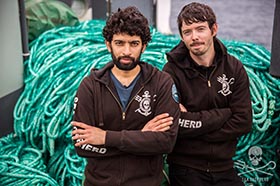 The Sam Simon will arrive at the port of La Rochelle in the southwest of France on Sunday April 26, where it will make 24-hour port call before proceeding to Bremen, Germany. The Bob Barker is scheduled to arrive at Bremen, Germany, on Tuesday April 28.

It will be the first time either ship has been to Europe since they were acquired by Sea Shepherd.

There to greet Captain Sid Chakravarty and the crew of the Sam Simon in France will be Sea Shepherd Founder and Paris resident, Captain Paul Watson and President of Sea Shepherd France, Lamya Essemlali.

“France welcomes the Sam Simon and the completion of an epic and historical 25,000 nautical mile, 144 day campaign that so successfully intervened against the toothfish pirates of the Southern Ocean,” said Captain Watson.

Captain Chakravarty said, "After protecting the Southern Ocean and chasing the toothfish poachers over 140 days and across four oceans, the Sea Shepherd ships and their crews are now bringing their undying commitments to Europe. For the first time in four years, the two ships will call Europe to undergo repairs and maintenance before continuing with their planetary work in the months ahead. It is a moment of celebration and joy to return to the safe shores of land after all these months."

Captain Cornelissen said, “I’m very happy to be able to personally thank the captains and crew of the Bob Barker and the Sam Simon for their amazing efforts during this epic voyage, and to welcome them to Europe – a long time stronghold of support for Sea Shepherd. They are all heroes who have written conservation history. The impact of this campaign will continue for many years and I hope many people will come to show their support.”

“It is an honor for the Bob Barker to sail into Germany and we are very much looking forward to thanking our European supporters face-to-face. They have been an integral part of the success of not only Operation Icefish, but all of our campaigns, and we are trilled to be able to share this victory with them,” said Captain Hammarstedt.

Operation Icefish began in December 2014 when the Sam Simon and Bob Barker left port to patrol the Southern Ocean shadowlands. The ships were in search of the six remaining toothfish poaching vessels – which Sea Shepherd calls the “Bandit 6” - known to operate illegally in the waters of Antarctica.

Over the four-and-a-half months that followed, Sea Shepherd delivered multiple devastating blows to the illegal fishing operations of the Bandit 6. 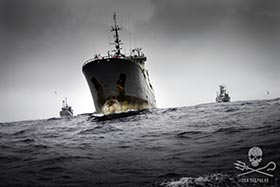 On December 25, the Sam Simon commenced mammoth four week-long operations to retrieve the illegal gillnets abandoned by the Thunder when it first fled from the Bob Barker. The confiscated net, measuring 72 kilometres in length, was later handed-over to authorities in Mauritius as evidence of the Thunder's illegal fishing activity.

On February 2, the Sam Simon intercepted another two of the Bandit 6 vessels, the Kunlun and the Yongding, in Australian waters, eventually chasing the Kunlun of its hunting grounds in the Southern Ocean.

In March, the Kunlun and another of the “Bandit 6” vessels, the Viking were detained by authorities in South East Asia. Investigations into their crimes are currently underway.

On April 6, in an unexpected turn of events, the chase of the Thunder ended dramatically when the vessel was scuttled by its captain and officers in the national waters of Sao Tome and Principe, off the west coast of Africa. Sea Shepherd believes this intentional act of sabotage was a final attempt to hide evidence of the Thunder's poaching operations.

The 40 crewmembers of the Thunder were rescued by the Sea Shepherd ships and handed over to authorities in Sao Tome and Principe later that evening. Investigations into their crimes continue.