Today, the Sea Shepherd ship, Bob Barker, tripled the record for the longest sea chase of a poaching vessel, marking its 63rd day of pursuit of the Interpol-wanted, Nigerian-flagged toothfish poaching vessel, Thunder.

The previous record was held by the Australian patrol vessel, Southern Supporter, which pursued the Uruguayan vessel, Viarsa 1, for 21 days in 2003.

The milestone comes just one day after the Bob Barker logged the second full month since it first intercepted the Thunder on the Banzare Bank in Antarctica.

Captain of the Bob Barker, Peter Hammarstedt, stated, “We first intercepted the Thunder on December 17. For two months we have ensured that this, the most notorious of all the toothfish poaching vessels, has not been able to kill any more of Antarctica's precious toothfish. In the process, we have cost the criminals behind this operation millions of dollars in lost profits. Sea Shepherd is sending a very loud message to the poachers who continue to threaten this region: your criminal activity ends here.”

On Saturday, fellow Sea Shepherd ship, the Sam Simon, rendezvoused with the Bob Barker on the Melville Bank in the south Indian Ocean in order to resupply the Bob Barker with food.

With the resupply operation complete, both Sea Shepherd ships are in pursuit of the Thunder. 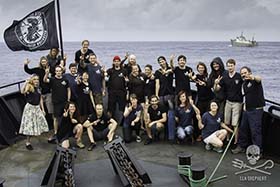 The Sam Simon is carrying onboard 72 kilometres of illegal gillnet, abandoned by the Thunder when if first fled from the Bob Barker. The nets will be used as evidence against the Thunder to aid in its prosecution.

The Thunder was the first of three poaching vessels that have been intercepted by the Sea Shepherd ships during the organisation's 11th Southern Ocean Defence Campaign, Operation Icefish.

On February 2, the Sam Simon intercepted another two Interpol-wanted poaching vessels, the Yongding and the Kunlun, in Australian waters in the Southern Ocean. Both vessels had illegal fishing gear on their decks at the time they were intercepted.

The Sam Simon subsequently engaged in a high seas pursuit of the Kunlun. On February 8, Captain Sid Chakravarty reported that he and the crew of the Sam Simon had successfully chased the poaching vessel out of its hunting grounds in the Southern Ocean.