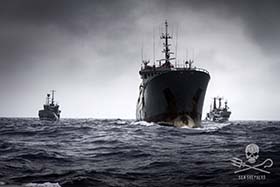 The Sam Simon is now resupplying the Bob Barker with food, as the Bob Barker settles in to a high seas stand-off with the Interpol-wanted, Nigerian-flagged poaching vessel, Thunder.

Captain of the Bob Barker, Peter Hammarstedt, said, “We have now commenced 'The Great Drift', as the Thunder attempts to out-wait us in this war of attrition. We already knew that we had enough fuel to outlast the Thunder. Now, with the arrival of the Sam Simon, we are confident that we also have enough food to stay with the poachers indefinitely.”

The Sam Simon will also assist the Bob Barker intervene against the illegal operations of Thunder should it try to lay any more gill-nets on Melville Bank. 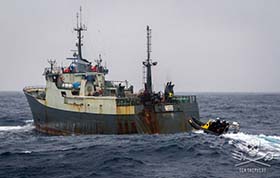 The Sam Simon's small boat collects further evidence of the Thunder's poaching operations. Photo: Krystal KeynesThe Bob Barker first intercepted the Thunder on December 17, 2014 on the Banzare Bank in Antarctica. Captain Hammarstedt conducted a citizen's arrest of the vessel for its illegal fishing activity, and ordered it to return to port in Fremantle, Australia.

The Thunder immediately fled from the Bob Barker. Over the next 60 days, the poaching vessel attempted to lose the Bob Barker by deliberately sailing into bad weather and heavy ice, and by attempting to intimate the Sea Shepherd ship with aggressive, close-quarter manoeuvring. Despite this, the Bob Barker has been able to maintain continuous pursuit of the poaching vessel, effectively shutting down its poaching operations and costing the illegal fishing operation millions of dollars in lost profits.

On January 16, the Sam Simon completed three week-long operations to remove the illegal gillnets that were abandoned by the Thunder when it first fled from the Bob Barker, from the waters of Antarctica. More than 72 kilometres of illegal gillnet was recovered over a three week period and over 1,400 fish, weighing a total of 50,000 kilograms, were returned to the ocean.

Following the successful retrieval operations, the Sam Simon intercepted another two Interpol-wanted poaching vessels, the Kunlun and the Yongding, in Australian waters in the Southern Ocean. Both vessels had illegal fishing gear on their decks at the time they were intercepted. 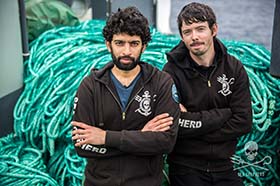 The leaders of Operation Icefish, Capts. Sid Chakravarty and Peter Hammarstedt, in front of some of the 72 km of illegal gillnet abandoned by the Thunder. Photo: Jeff WirthRecords from the Commission for the Conservation of Antarctic Marine Living Resources (CCAMLR) indicate that both the Kunlun and the Yongding have a long history of illegal fishing activity, including links to known Spanish crime syndicate, Vidal Armadores.

Following aggressive manoeuvring and evasive actions aimed to deter the Sam Simon, both the Kunlun and the Yongding fled. The Sam Simon subsequently engaged in a high seas pursuit of the Kunlun. On February 8, Captain Chakravarty reported that he and the crew of the Sam Simon had successfully chased the poaching vessel out of its hunting grounds in the Southern Ocean.