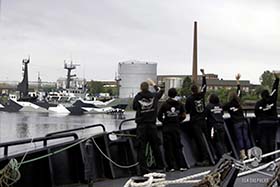 Crew of the Bob Barker wave farewell to the departing Sam Simon. Photo: Michael ArtemisThe Sea Shepherd ship, Sam Simon, has departed Bremen, Germany, to embark on the organization’s sixth Pilot Whale Defense Campaign in the Faroe Islands, Operation Sleppid Grindini. The ship is expected to arrive in the island archipelago on Friday, following a short, mid-week stopover in the Shetland Islands.

Captained by Sea Shepherd veteran, Lockhart “Locky” MacLean of Canada, the crew of Dutch-registered Sam Simon will join fellow crewmembers on board Sea Shepherd’s fast trimaran, Brigitte Bardot, who arrived in the steely waters of the Faroe Islands last Wednesday.

For hundreds of years the people of the Danish Faroe Islands have been herding migrating pilot whales from the sea into shallow water and slaughtering them in a practice called the 'grindadráp' or 'grind'.

“Denmark allows the Faroe Islands to continue the barbaric practice of the grindadráp, despite being a signatory to the Bern Convention, which outlaws the slaughter of cetaceans. Like other practices that don't belong in the 21st century that violate human rights or animal welfare, tradition does not always make a practice acceptable or humane,” said Captain MacLean.

“This year, Sea Shepherd is also following a tradition, which we started in 1985, to call at the remote Faroe Islands and bring the attention of the rest of the world to this cruel and inhumane practice,” he added. 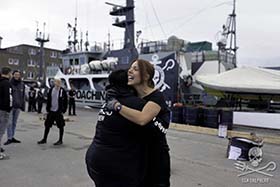 Crewmembers share goodbyes as the Sam Simon departs for Operation Sleppid Grindini. Photo: Michael ArtermisLong-finned pilot whale populations are subject to a number of threats, ranging from military sonar to entanglement in fishing gear. It is estimated that the species could face a global decline of 30% over three generations.

The 2015 Faroe Island killing season started in a horrific manner on Saturday June 6, when 154 pilot whales were slaughtered on Miðvágur beach on the island of Vágar in the northwest of the Faroe Islands. The grind took place prior to the arrival of Sea Shepherd, and was the largest dolphin slaughter in the islands since 2013.

Captain MacLean leads an international crew of volunteers ready to stand in defense of the pilot whales.

“Our ship, the Sam Simon, is crewed with 24 passionate volunteers from 11 nations. Our hope is that compassion will prevail over cruelty, that the beautiful bays and beaches of the Faroe Islands will stop running red with the blood of highly intelligent, sentient and social mammals,” said Captain MacLean.

The Sea Shepherd ship, Bob Barker, also registered in the Netherlands, will shortly join the rest of the Sea Shepherd crews in the Faroe Islands, making this Sea Shepherd’s strongest at-sea presence in the region to date.

The ships are supported by a multi-national land team, lead by Rosie Kunneke of South Africa, ready to do everything possible within the bounds of the law to protect the pilot whales and other dolphins targeted by the grind. 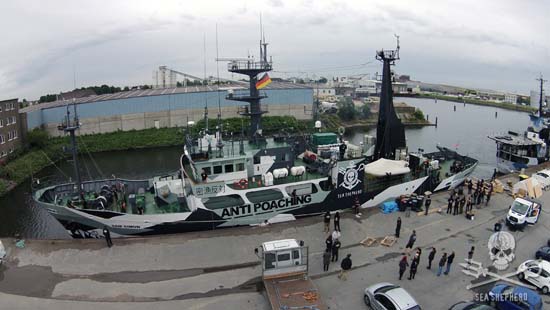 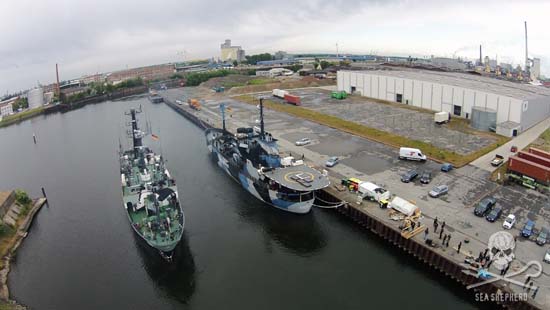 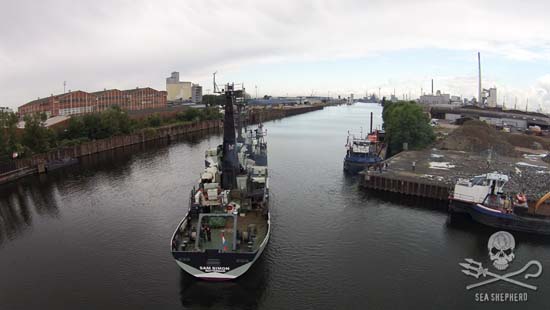 The Sam Simon is now en-route to the Faroe Islands. Photo: Guiga Pirá