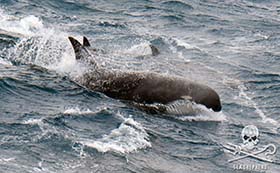 The distinctive large bulbous foreheads and tiny post-ocular eye markings are specific to the "Ecotype D" Orcas. Photo: Erwin VermeulenOn December 26 2014, the Sea Shepherd ship, Bob Barker, encountered a pod of rare, “Ecotype D” Orcas while passing between the Crozet and Kerguelen archipelagos in the South Indian Ocean, in pursuit of the toothfish poaching vessel,Thunder.

The encounter was photographed and filmed, and images of the encounter were forwarded to Marine Ecologist and (Antarctic) Orca expert, Robert L. Pitman, of Southwest Fisheries Science Center of the National Oceanic and Atmospheric Administra­tion in the United States, for review.

Mr. Pitman examined the photographs and confirmed that these were, “definitely a Type D Killer whale,” adding, “I don't think they have ever been filmed alive.”

First identified in 1955 when a pod stranded on Paraparaumu Beach, New Zealand, the Ecotype D Orca is characterised by large bulbous foreheads, similar to those of Pilot whales, and tiny post-ocular eye markings.

Following the 1955 stranding, this type of Orca was not seen again for almost 50 years. It is believed that there have been approximately 13 sightings to date, including the most recent sighting by the Bob Barker crew.

Bob Barker Chief Engineer, Erwin Vermeulen, was one of the crewmembers who photographed the encounter. He recounts, ”The crew watched in awe as the 13 killer whales, including a small juvenile and a large male, used the six-metre swell to surf across the bow. For almost an hour the surf-show continued and was accompanied by bow riding, tail-slaps and breaches.” 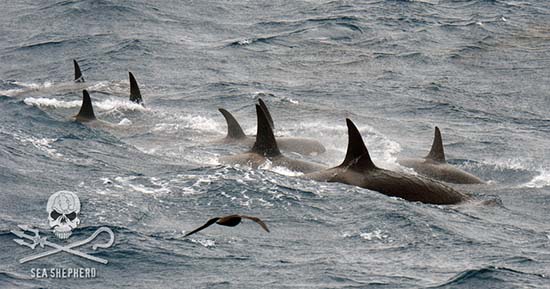 The rare pod of about 13 Orcas stayed with the Bob Barker for an hour.

DNA retrieved from the 1955 stranding revealed that Ecotype D's genetic differences point at a divergence from other Orcas about 390,000 years ago. This makes Ecotype D the second oldest Orca type, and second most genetically divergent.

Determining how many species of Orcas there are is critically important to establishing conservation measures and to better understand the ecological role of this apex predator in the world's oceans.

NEVER BEFORE SEEN FOOTAGE: On December 26 2014, while in pursuit of the
poaching vessel Thunder, the crew of Sea Shepherd ship, Bob Barker,
encountered a pod of rare “Type D” Orcas.

Marine ecologist and (Antarctic) Orca expert Robert L. Pitman, examined photos taken
of the encounter, and confirmed the Orcas as “definitely a type D killer whale”.
He added, “I don't think they have ever been filmed alive.”