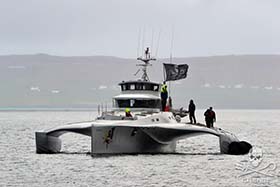 The Australian-registered Brigitte Bardot arrives in the Faroe IslandsYesterday, at approximately 1030 local time, the Australian-registered Sea Shepherd fast trimaran, Brigitte Bardot, arrived at Sund in the port of Tórshavn in the Faroe Islands for the organization’s 2015 Pilot Whale Defense Campaign, Operation Sleppid Grindini.

The Brigitte Bardot was met by nine Faroese police officers, but was not boarded. The vessel and crew cleared customs without incident.

The crew of the Brigitte Bardot takes their place alongside the Sea Shepherd land team, including Land Team Leader, Rosie Kunneke of South Africa, and Campaign Co-Leader, Scottish actor Ross McCall, who arrived on the Island archipelago earlier in the week.

Captain of the Brigitte Bardot, Wyanda Lublink of the Netherlands, said, “My crew and I are honored to stand with our dedicated land team in defense of the pilot whales. We are determined to do all that we can within the limits of the law to bring light to this outdated and unjustifiable slaughter.”

For hundreds of years the people of the Danish Faroe Islands have been herding migrating pilot whales from the sea into shallow water and slaughtering them in a practice called the 'grindadráp' or 'grind'. 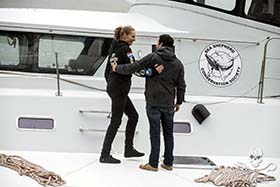 Campaign Co-Leader, Ross McCall greets Brigitte Bardot Captain, Wyanda Lublink. Photo: Mayk WendtThe slaughter of cetaceans is illegal within the European Union (EU), of which Denmark is a member state. However, Danish nationals in the Faroe Islands remain dubiously exempt from this law.

In 2014, Denmark actively collaborated with the Faroese whalers when the Danish Navy arrested eight Sea Shepherd crewmembers and seized three Sea Shepherd small boats for acting in defense of a pod of pilot whales targeted in a grind.

Earlier this week, while campaigning for the upcoming Danish national elections, Danish Prime Minister Helle Throning-Schmidt voiced her support of the on-going slaughter of cetaceans in the Faroe Islands.

“There is a major inconsistency between the Faroe Islands claiming to be exempt from EU law, and at the same time being protected by Denmark, a member of the EU, to do so. Without the money, resources and political support provided by Denmark to the Faroe Islands, the practice of the grind, which flouts EU law, would not be able to continue.” said Captain Alex Cornelissen, CEO of Sea Shepherd Global and Campaign Leader of Operation Sleppid Grindini.

Operation Sleppid Grindini will be Sea Shepherd’s sixth Pilot Whale Defense Campaign in the Faroe Islands. The Sea Shepherd ships Sam Simon and Bob Barker, both registered in the Netherlands, will shortly join the rest of the Sea Shepherd crews, making this Sea Shepherd’s strongest at-sea presence in the region to date. 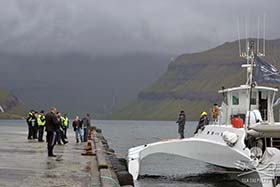 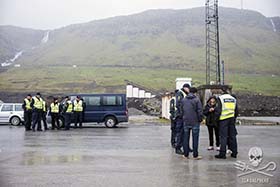