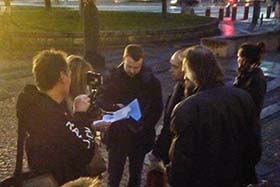 Captain Cornelissen, a Dutch national, was issued with the notice by a Danish police officer outside the Danish parliament building yesterday. He, along with fellow Dutch nationals, Director of Sea Shepherd Netherlands, Geert Vons, and legal council for Sea Shepherd, LiesbethZegveld, had just finished a presentation on the grindadráp to a group of Danish parliamentarians when the incident occurred.

Between June and September this year, 490 pilot whales were brutally slaughtered in the infamous Faroe Islands’ drive hunt, known as the grindadráp. However, thanks to the direct-action of Sea Shepherd crews, the lives or hundreds more were saved.

“Being served outside the Danish parliament building by a Danish police officer, after being invited by Denmark to address Danish parliament regarding our position on the grindadráp, confirms Sea Shepherd’s position that Denmark is actively involved in the killing of pilot whales,” said Cornelissen.

Sea Shepherd was among eight groups who were invited to present their positions on the slaughters to members of the Danish parliament’s Faroese Committee. 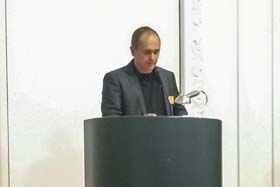 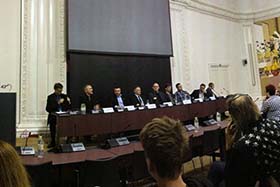 Sea Shepherd was one of eight groups to present on the grindadráp in front of members of Danish parliament. Photo: Sea Shepherd

In the presentation, Sea Shepherd underlined Denmark’s international legal responsibilities to protect pilot whales, to prohibit their intentional killing, and to enforce such legislation nationally, reiterating that Denmark’s support of the grindadráp is in breach of these legal obligations.

Sea Shepherd believes that the forum was intentionally weighted in favor of those who support the grindadráp.

“It was valuable to be granted the possibility to lay out Sea Shepherd's position on the law. I regret, however, that the hearing was too emotional to be a true exchange of arguments,” said Zegveld.

Despite the obvious bias in favor of the hunt, the forum does represent Denmark’s awareness of a growing sentiment against the grindadráp throughout Europe, as the government is held to account for its collaboration with the Faroe Islands in this brutal and bloody practice.

“The tide is turning against the grindadráp,” said Vons. “With continued criticism from within Europe and mounting pressure on the government of Denmark to withdraw its support of the slaughters, it is clear the world is no longer willing to sit by and watch these illegal massacres take place.”