Sea Shepherd was first activist group in the Faroes in 1983, with further direct-action campaigns in 1985, 1986, 2000, 2011, 2014 and 2015. Then due to vessel restrictions directed at Sea Shepherd as well as new Faroese legislation preventing interventions from any activists against the grindadrap - Sea Shepherd UK launched ‘Operation Bloody Fjords’ with land-based crew being sent to the islands every year since 2016 to investigate, document and expose the barbaric hunts to the world to bring pressure on the Faroese to finally end the grindadráp.

During 2020 our ground crew patrolled for over 2 months when COVID-19 travel restrictions were eventually lifted. Operation Bloody Fjords over recent years has generated many hundreds of international online and printed news articles, as well as featuring in radio and TV programs. However, the Danish Media rarely reported on the dolphin killings around the Faroe Islands, so Sea Shepherd UK and Sea Shepherd Scandinavia reached out to respected and recognised Danish activists to join the campaign and we were very pleased to have nine Danish activists last year in the Faroe Islands working alongside our UK volunteers.

There were no grindadrap hunts while our crews patrolled in August and September (typically the peak months for grindadrap hunts). However, three grindadrap hunts did happen during despite COVID lockdowns or physical distancing restrictions in the Faroes while pilot whales were killed during a tagging exercise and two small pods of Northern Bottlenose whales were killed after they stranded. The total of cetaceans killed in 2020 was 539 long finned pilot whales, 35 Atlantic white sided dolphins and 11 Northern bottlenose whales during the following:

Sea Shepherd’s determination to end the grindadrap now continues with the 6th year of ‘Operation Bloody Fjords’ - our 13th campaign season on the Faroe Islands with more Danish and Scandinavian crew than ever before.

During 2020 (thanks especially to our Danish crew) we started to find we have new signs of support in the Faroe Islands, not only against the grindadrap hunts but also for other Sea Shepherd campaigns around the world.  This year our volunteer crew will do everything we can to engage with and encourage more Faroese citizens to speak out against the hunts, to support Sea Shepherd campaigns around the world, and look towards establishing, hopefully in the near future a ‘Sea Shepherd Faroe Islands’ chapter.

Sea Shepherd also continues our campaign for international pressure on the Faroe Islands to end the pilot whale and dolphin hunts. We call upon both compassionate citizens and companies to boycott especially Faroese seafood products, for tourists to choose more whale and dolphin friendly destinations, and for Cruise Ship Companies to reconsider any future visits to the islands until the grindadráp hunts are ended forever. 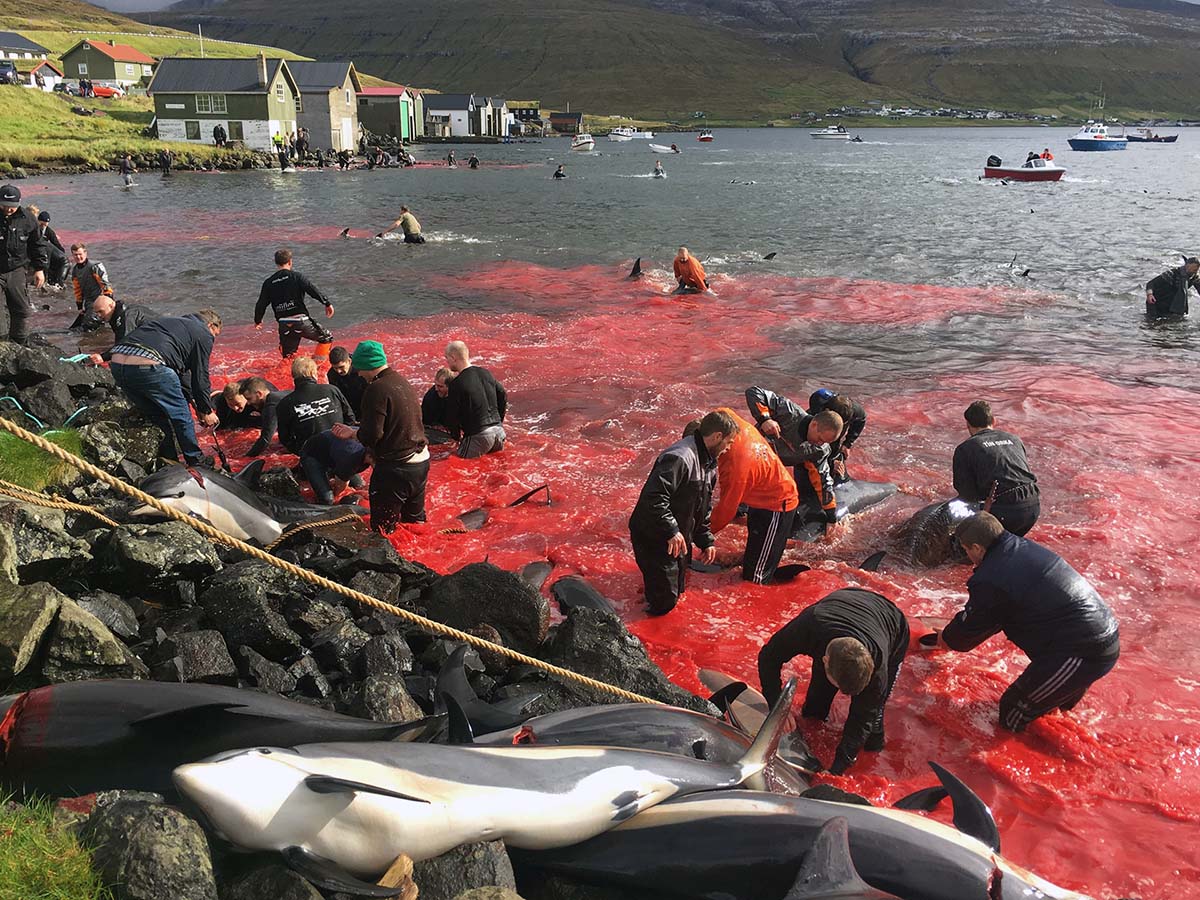 The grindadráp (or ‘grind’ as the hunts are commonly called) can happen at any time at any of the 26 designated killing bays around the islands, with most of the hunts occurring between June and September.

The grindadráp has no quota and the Faroese rarely do not authorize a hunt when a pod is spotted near the coastline. The hunts are merciless as every member of the pod is killed including pregnant mothers, juveniles, and weaning calves. The grindadráp would be totally illegal under European Union legislation, because in the EU (including the kingdom of Denmark) is illegal to kill, harass or stress any cetaceans. Despite the Kingdom of Denmark being in the EU, the Faroe Islands is not, although the islands are within Europe and benefits substantially from subsidies of around $100million (USD equivalent) from Denmark as well as having free trade agreements with the EU.

The pilot whale meat which is contaminated by DDT, PCB and industrial heavy metal pollutants including mercury - poisons not only the Faroese people, but also tourists. The hunts are fully sanctioned by the Faroese government, defended by the Kingdom of Denmark (via the Danish Navy, Police and Court systems) and is continued as little more than a national sport poorly justified with arguments of sustainability, history and culture.

Due to its lucrative fishing and fish farming industries, the Faroese economy has prospered with the islanders per capita GDP comparable with other wealthy Scandinavian countries and comprehensive year-round imports of food and commodities from around the world. The current unemployment level is just 1.7% with near zero poverty recorded in the Faroes - yet still the islands still receive an annual subsidy from Denmark equivalent to $100m (USD).

“The grindadráp is a barbaric relic of a bygone age. A needless hunt of hundreds of pilot whales and dolphins which should have ended a century ago which is not needed to feed anyone on the islands” -

The web pages for Operation Bloody Fjords are at: https://www.seashepherd.org.uk/campaigns/operation-bloody-fjords/

The Facebook page for the campaign is at: https://www.facebook.com/OpBloodyFjords/

Please help support Sea Shepherd UK’s campaigns in the Faroe Islands by donating to our charity at:  https://www.seashepherd.org.uk/support-us/donate-monthly.html