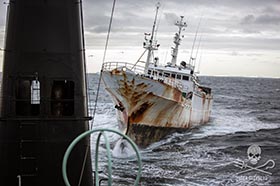 The poaching vessel, Yongding, turned toward the Sam Simon, missing a collision by 10 metres. Photo: Jeff WirthToday at approximately 1130 AEDT, the Sea Shepherd ship, Sam Simon, intercepted the toothfish poaching vessels, the Yongding and the Kunlun; two of the three vessels that fled from the New Zealand Navy last month, after they were found fishing illegally in waters west of the Ross Sea.

The two vessels were intercepted by the Sam Simon at 66˚ 39 South 063˚ 43 East, inside Australian waters with prohibited fishing gear on their decks. The region is managed by Australia in accordance with its international obligations as a Member of the Commission for the Conservation of Antarctic Marine Living Resources (CCAMLR).

Both the Yongding and the Kunlun haveInterpol Purple Notices issued for them, and are on the CCAMLR black list of Illegal, Unregulated, Unreported (IUU) fishing boats. Both vessels were flying the Equatorial Guinea flag at the time they were located.

Captain of the Sam Simon, Sid Chakravarty, radioed the vessels, ordering them out of the region. The Yongding then turned directly toward the Sam Simon, missing a collision by 10 metres.

Captain Chakravarty, said, “This is the second instance in the last month that both the Yongding and the Kunlun have been found in Australian waters. Both vessels have a long history of fishing violations, and the aggressive actions of the Yongding indicate that they have something to hide. It is abundantly clear that the New Zealand and Australian governments should not have let the vessels out of sight when they were first found.”

The Yongding and the Kunlun, along with the other poaching vessel that was intercepted by the New Zealand Navy, the Songhua, are believed to have links to known Spanish crime syndicate, Vidal Armadores. 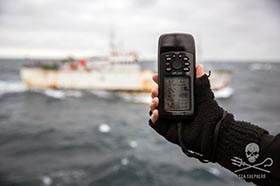 Sea Shepherd has again criticised the Australian government who, as yet, has not responded to the presence of the poaching vessel in Australian waters.

Captain Chakravarty said, “The inaction of the Australian government, choosing to not take up the chase after the HMNZS Wellington was forced to return to port, has allowed the poachers to roam free in these waters. This has directly resulted in the illegal vessels continuing to plunder Antarctica of its vulnerable toothfish populations. In response to this meek reaction from Australia, the poaching vessels have shown little regard for authority and absolutely no concern of being apprehended. The Sam Simon is now committed to blockading the fishing operations of the Yongding and the Kunlun, with the Sea Shepherd once again standing as the last line of defence for the marine life of Antarctica.”

The Yongding and the Kunlun are two of six remaining outlaw vessels, which Sea Shepherd calls the “Bandit 6”, that are known to be involved in IUU fishing of toothfish inside the CCAMLR region in the Southern Ocean.

On January 16, the Sam Simon completed a mammoth operation to retrieve illegal gillnets from the Southern Ocean, after they were abandoned by another of the “Bandit 6” poaching vessels, the Nigerian-flagged, Thunder. More than 70 kilometres of illegal gillnet was retrieved over a three week period and over 1,400 fish, weighing a total of 50,000 kilograms, were returned to the ocean.

Fellow Sea Shepherd ship, the Bob Barker, is currently engaged in a record-breaking pursuit of the Thunder, which today entered its 47th day.