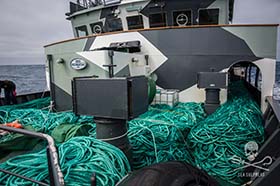 Just some of the 72 km of the Thunder's illegal gillnet that was confiscated by the Sam Simon.
Photo: Jeff WirthYesterday, the Sea Shepherd ship, Sam Simon, handed-over evidence to authorities at Port Louis, Mauritius, of the illegal fishing activities of the Nigerian-flagged poaching vessel, Thunder.

The Thunder is the most notorious of the six remaining toothfish poaching vessels that are known to still engage in Illegal, Unreported and Unregulated (IUU) fishing for toothfish in the Southern Ocean. In December 2013, the Thunder was issued with an Interpol purple notice for suspected illegal fishing activity, following a joint effort by New Zealand, Australian and Norwegian authorities.

For the past two months, Captain of the Sam Simon, Sid Chakravarty, has reported to authorities, including international policing agency Interpol, about the confiscation of the Thunder’s illegally-set gillnets. Authorities were also notified that the Sea Shepherd ship would be arriving in Mauritius to hand-over the gillnets as evidence to aid in the prosecution of the Thunder.

Upon docking in Port Louis, the Sam Simon was met by various Mauritian law enforcement agencies comprising of the Mauritius Police Force, the Coast Guard and the Fisheries Policing Agency.

Through the course of the day, the authorities conducted a rigorous inspection of the confiscated gear and met with Captain Chakravarty to establish a chain of custody for the gear being handed over as evidence.

He further added, “The Mauritian authorities have in one day done more to combat illegal fishing than the Australian government has done this entire season. It is definitely a wake-up call for Australia to dispatch a patrol vessel to clean out their Antarctic waters.”

Since the commencement of Operation Icefish in December last year, the Sam Simon and fellow Sea Shepherd ship, the Bob Barker, have intercepted three of the six remaining outlaw vessels. In doing so, Sea Shepherd has saved the lives of countless marine creatures and has caused major disruptions to the profits of illegal fishing operators in Antarctica.

Captain of the Bob Barker, Peter Hammarstedt, said, “Let it be known, we are here for the long haul. With Sam Simon handing over evidence of the Thunder's criminal operations to police in Mauritius, the Bob Barker is committed to escorting the Thunder to its next port and into the hands of the authorities. The interest shown by Interpol in this case gives us the utmost confidence that this vessel is nearing the end of its reign of terror and the issue of IUU fishing is finally gaining the attention it deserves.”

The Bob Barker intercepted the Thunder on December 17, 2014, on the Banzare Bank in Antarctica. The Thunder immediately fled from the Sea Shepherd ship, leaving behind thousands of metres of illegal fishing gear in the Southern Ocean.

Through poor weather and in the face of hostile actions by the poachers, the Bob Barker has maintained pursuit of the Thunder. The Sea Shepherd ship now enters day 71 of what has become a record-breaking, continuous chase of the poaching vessel.

On December 25 2014, the Sam Simon commenced retrieval operations to remove the illegal fishing gear abandoned by the Thunder. More than 72 kilometres of illegal gillnet was recovered over a three week period and over 1,400 fish, weighing a total of 45,000 kilograms, were returned to the ocean.