Illegal Fishing Activity by Poachers Thwarted in the “A-Zone” 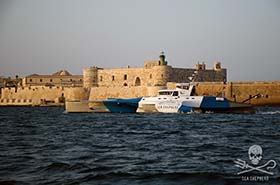 The Brigitte Bardot sails off the coast of Siracusa during Op. Siracusa 2014.
Photo: Tommaso De LorenziFollowing on from the incredibly successful 2014 campaign, Sea Shepherd Global launches Operation Siracusa 2015. Led by Sea Shepherd Italia, the campaign aims to defend the fragile ecosystem of the Plemmirio Marine Reserve, off the Eastern coast of Siracusa in Sicily, against illegal fishing.

Already, the impact of the 2015 campaign has been felt. On Friday May 22, the first day of patrols for Operation Siracusa 2015, Sea Shepherd volunteers came across a vessel that they suspected to be engaged in illegal fishing activity. The vessel was discovered at night, with two divers close-by in the water, at the border of the “A-Zone” - the maximum protected area in the Reserve.

Sea Shepherd immediately notified local authorities of the suspicious activity. When the Polizia Ambientale (the Environmental Police) arrived to investigate, they also spotted a van that had been positioned by the poachers to facilitate their escape.

Further reinforcements arrived courtesy of the Guardia di Finanza (the Financial Police), and the Coast Guard. The poachers attempted to escape by diving, leaving behind their vehicle and their gear, but were eventually apprehended after a nightlong search. Investigations are now underway.

The Plemmirio Marine Reserve was established in 2004 and extends along a 14-km coast trait, on the Eastern coast of the Penisola della Maddalena (Siracusa). The reserve covers 2,429 hectares and is classified as an Area Specialmente Protetta di Interesse Mediterraneo (ASPIM); a name given to sites that are important for the conservation of biodiversity in the Mediterranean. The region is also listed as an Area Marina di Reperimento, which means its conservation is deemed to be a priority. 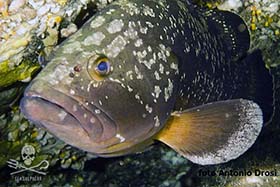 An endangered Dusky Grouper, targeted by poachers in Siracusa. Photo: Antonio DrosiThe Reserve is a haven for marine life including large pelagic fish such as tuna, greater amberjacks and sharks, as well as transient marine mammals, including sperm whales. Species that are most directly impacted by poaching in the region are the sea urchin and the dusky grouper, the latter being listed as an endangered species on the IUCN Red List of Threatened Species.

During Operation Siracusa 2015, Sea Shepherd volunteers will patrol the territory along the coast of the Marine Reserve, identifying, documenting and reporting any poaching activity in the region. On days when poor weather does not allow coastal patrols, volunteers will engage in beach clean-ups to remove plastic and other garbage from the area.

Sea Shepherd will continue its successful cooperation with the authorities of the AMP Plemmirio (Plemmirio Marine Reserve), established during the 2014 campaign, which lead a total a total of 1,250 urchins being rescued, illegal fishing nets and fishing gear being confiscated, and poachers being slapped with fines for their crimes. 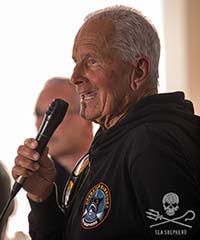 Enzo Maiorca gives a speech during a Press Conference Op. Siracusa 2014.
Photo: Giacomo GiorgiIn 2015, Sea Shepherd is honoured to once again receive the support of Enzo and Patrizia Maiorca on Operation Siracusa. Members of Sea Shepherd’s Board of Advisors and world freediving champions, Enzo and his daughter Patrizia are the igniting force behind the campaign. Passionate about the sea and its wonderful creatures, they are especially concerned for the fate of this delicate, threatened ecosystem.

CEO of Sea Shepherd Global, Alex Cornelissen, stated, “For the second year, Sea Shepherd Italy will be working with local law enforcement on Sicily to stop ongoing poaching operations in the Plemmirio Marine Reserve. After the enormous success of last year’s operation, Sea Shepherd Italy volunteers have started with the same dedication and have already helped to realize the first arrests of the season. There is no doubt that under the watchful eyes of Sea Shepherd Italia, no poacher can get away with plundering this important Marine Protected Area. Everybody in the Sea Shepherd movement once again awaits the further news from Sicily. No doubt, more arrests will follow and poaching will once again come to a full standstill.”

The Plemmirio Marine Reserve is divided into three Zones, which enjoy different level of protection: the A-Zone, which is the area where the strictest restrictions are in place, the B-Zone which is the second highest level of restrictions, and the C-Zone, where the rules are most lenient.

The A-Zone enjoys total protection. No vessels may enter it or be anchored there. No fishing, gathering marine species, or diving is allowed. Spearfishing, both with aqualungs and by free divers, is forbidden in all three areas.