Faroe Islands Tourism Industry Directly Linked To Slaughter Of Another 61 Pilot Whales As E.U. and U.S. Nationals Are Arrested. 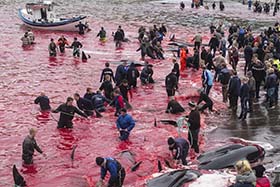 A Sea Shepherd small boat, which had been patrolling the area at the time the hunt began, arrived on the scene as the pod of whales was being driven to the Sandavágurkilling beach on the island of Vágar.

The Sea Shepherd small boat disrupted the hunt, maneuvering between the flotilla of boats that had surrounded the pod and was driving them into the killing beach.

Despite being drastically outnumbered by the hunting boats, the Sea Shepherd boat managed to re-direct the pod, causing great confusion to the hunt.

On the shore of the killing beach, five more Sea Shepherd volunteers ran from the beach into the water in order to position themselves between the whales and the awaiting hunters. All five were tackled by police and dragged back to the sand where they were handcuffed and seated, facing the unfolding carnage.

Initial reports released through Faroese media indicated a pod as large as 200 was being hunted. However, by the time the pod was forced to beach, only 61 pilot whales were counted. It is not known if some whales escaped or if initial estimates were exaggerated.

All 61 pilot whales were then dragged onto the killing beach and eventually slaughtered. Sea Shepherd estimates that the slaughter, from the moment the pod was reported until the final killing was complete, took approximately two hours. 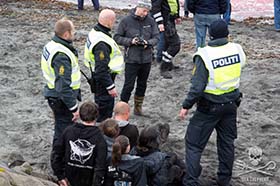 5 Sea Shepherd volunteers have been arrested in the Faroe Islands. Photo: Marianna BaldoThe five Sea Shepherd crew who were arrested; Rudy de Kieviet of the Netherlands, Lawrie Thomson of the United Kingdom, Tobias Boehm of Germany, Alice Bodin of Italy, and Frances Holtman of the United States, have had their passports confiscated and will be required to remain in the Faroe Islands until further notice.

A legal representative has been brought in to act on behalf of all of those arrested.

CEO of Sea Shepherd Global, Captain Alex Cornelissen of the Netherlands, has responded to the arrests, stating, “Once again, our crew have been arrested by officers of the Danish police force, with the blessing of Denmark. How much longer can the government of Denmark continue its arrogant support of this bloody practice, which is in direct conflict with its commitments to international law? This is Denmark’s shame, and this is Denmark’s responsibility, and this government must be held accountable for its actions under the terms of the European Union.”

The Faroe Islands tourist industry has been directly linked to the latest slaughter at Sandavágur. Local Faroese media report that the pod was first spotted by an Atlantic Airways helicopter – a service that transports travellers between islands in the archipelago.

The location of the pod was then reported to local authorities who gave the green light for the hunt to proceed. It is unclear whether passengers or the crew of the helicopter spotted the pod, or whether those who spotted the pod understood that the animals would be hunted and slaughtered. 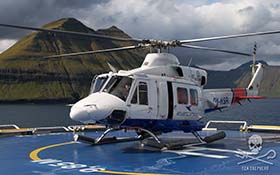 Reports indicated the pod was first spotted by an Atlantic Airways helicopter. (source: Wikimedia Commons)Sea Shepherd Land Team Leader, Rosie Kunneke, stated, “This isn’t the first time Faroes tourism has been used as a weapon to assist with the slaughter of pilot whales. Ferries that travel between the islands, which are frequented by tourists, are used as a platform to spot and report whale sightings. And as we have reported previously, any person, including any tourist, who does not report sightings of whales is in breach of the Faroese Pilot Whaling Act and can be punished under the law. Tourists travelling to the Faroe Islands need to be made aware of the risks associated with a Faroe Islands getaway.”

Last week, two major German cruise-liner companies, AIDA and Hapag-Lloyd, announced that they would be cancelling upcoming trips to the Faroe Islands because of the impact of the grindadráp, and the law that protects the slaughter, on its customers. Already, this backlash from the tourism industry is estimated to have caused a loss of 6000 tourists to the archipelago.

Yesterday’s slaughter at Sandavágur is the fifth of the year in the Faroe Islands. A total of 490 pilot whales have been killed in the archipelago since June.

On July 23, over 250 pilot whales were slaughtered on the killing beaches of Bøur and Tórshavn in two separate grindadráps. Five Sea Shepherd volunteers were arrested that day for standing-up in the defense of the whales. All five, four of whom are citizens of the European Union, have since been charged with breaching the Pilot Whaling Act and public disturbance. An application has been lodged to deport the five, however this is currently under appeal.

Video footage and images of the July 23 slaughter and arrests attracted worldwide attention, and shone a spotlight on the continued support that Denmark provides to protect the practice of the grindadráp in the Faroe Islands.

Sea Shepherd has been leading opposition to the grindadráp since the 1980s. Operation Sleppid Grindini is the organization’s sixth pilot whale defense campaign in the Faroe Islands.