Sea Shepherd exposes the Faroese grindadrap training course to be nothing but a sham!

Danish Sea Shepherd crew member attends the Faroese Ministry of Fisheries / Pilot Whaling Association’s ‘grindadrap’ course - and is officially certified to kill pilot whales despite not understanding a word of Faroese, receiving no practical training, and without even holding the tools used.

On the 1st of May 2015, in response to years of international criticism about the inhumane and slow deaths of pilot whales and dolphins at the hands of untrained Faroese citizens - The Faroese authorities brought in a legal requirement that anyone participating in the killing of pilot whales had to attend an official course with the aim, they claimed, of making sure the killing was done professionally and as humanely as possible. They also officially introduced the requirement to use spinal lances which, if used correctly sever the spine of the animal – though it remains alive and bleeds to death while paralysed.

This year one of our Sea Shepherd crew managed to attend the public course and receive the formal certification to kill pilot whales – even though our volunteer couldn’t speak or understand a word of Faroese and never even had the opportunity to touch a single killing tool (spinal lance or knife).

The course can be attended by anyone in the Faroe Islands over the age of 16 and is an entirely theoretical lecture lasting just over an hour. Anyone can turn up, take a seat in the back row, fall asleep for an hour, and still manage to get the permission to be a certified pilot whale killer at any grindadrap hunt around the Faroe Islands.

This course introduced in 2015 has been and continues to be nothing more than a deliberately deceptive attempt by the Faroese Ministry of Fisheries to silence critics both around the world and within their own country. Though spinal lances are used on pilot whales – it is rarely a quick death, and the Faroese always resort to using a traditional knife after the use of a lance. In response to the outrage both within the islands and internationally at the killing of the 1428 Atlantic White Sided Dolphins on the 12th of September 2021, the Faroese are now introducing a spinal lance for use on dolphins to be used again by inexperienced Faroese men with little or no training.

Sea Shepherd asks that any Faroese people who oppose animal cruelty to call for an end to the inhumane and unnecessary hunts of dolphins and pilot whales.

The following is the testimony of our Danish Sea Shepherd crew member who attended and was certified to take part in the killing of pilot whales:

I entered the building together with numerous other course attendants where i was given a piece of paper with information about the Grindamannafelagið, the pilot-whaling association, at the entrance. No other interaction was needed as I made my way into the cinema hall and proceeded to ask the presenter in Danish if it was OK for me to take pictures during the presentation, to which he smiled slyly and asked, “for what?”, which was a suspicious reply since this was a public course and one would think they wouldn’t have anything to “hide” or be embarrassed of.

Since this course surely is made and intended for the purpose of educating young men in killing pilot whales as efficiently as possible, to minimizing suffering, right? NO.

I made something up along the lines of my family wanting to see the course, and he replied “only for the family”.

The course took about one hour where the history of the grind was briefly presented followed by law paragraphs read out loud. The presentation talked about the different tools and how to use them correctly as well as the different regulations regarding tool dimensions and technique.

This was followed by a video demonstrating where to insert the lance and how to kill the pilot whale.

During this the lance and hook was shown to the audience with some explanation as to how they work. There was no requirement to even hold a tool and very few people went over to the “tool stand” to actually do that in the end.

The whole course was strictly theoretical - and in a language I do not understand.

In the end, some basic pilot whale anatomy was shown, with focus on the organs and the anatomy correlated to how the tools would affect it.

During this I sat at the front row in the middle, with my phone recording the screen. As a Dane I was able to understand very little of what was written on the screen, and nothing at all of what the presenter talked about.

Just focusing on the course structure and context itself, it would also seem to be very insufficient. Just a one-hour theoretical course, with no test or any measure to make Sure people actually understand or learned the required skills is simply a joke. In addition to that, no one can learn how to properly take the life of a sentient being in a one-hour course, with no practical teaching. This was like watching “how to drive a car tutorial” on YouTube and then attending a 24 hour Le Mans race afterwards. But it is hard to make a comparison, since this is, as far as I know of, unheard of anywhere else in the world.

Most of the young men at the course will find themselves one day at a killing beach holding a sharp lance or knife, for the first time ever, and may ‘have a go’ at killing a whale. It is no wonder therefore that our crew on Operation Bloody Fjords regularly film and photograph failed killing attempts and great suffering for the whales and dolphins.

Most Faroese men killing whales are simply amateurs and have no idea how to kill such a massive animal.

I could never kill a whale efficiently and as painlessly after attending this course, and it is doubtful anyone else could - even if they do speak and read Faroese given how little instruction they were being given.

The cinema was almost packed and there were predominantly a young male audience.

The queue to fill out the certificate form and have our pictures taken took around the same time as the course. Approximately an hour and I wasn’t even the last in the queue. The form I filled consisted of writing name, phone number, city, and date of birth, followed by having my picture taken.

And out I went to be picked up by my other crewmates to re-join the campaign.

The conclusion of this is that I, a 21-year-old Danish foreigner, with no understanding of Faroese, still no understanding of most of the content of the course, - attained official permission to go out and slaughter whales with no practical training and with sharp tools I have never even held – and I have a Faroese Ministry of Fisheries ID Card to prove it.

This is totally outrageous!

This needs to stop. 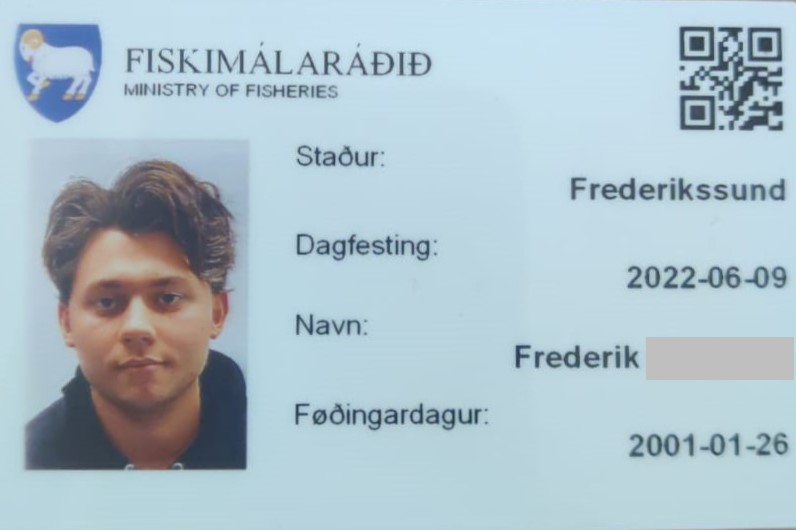 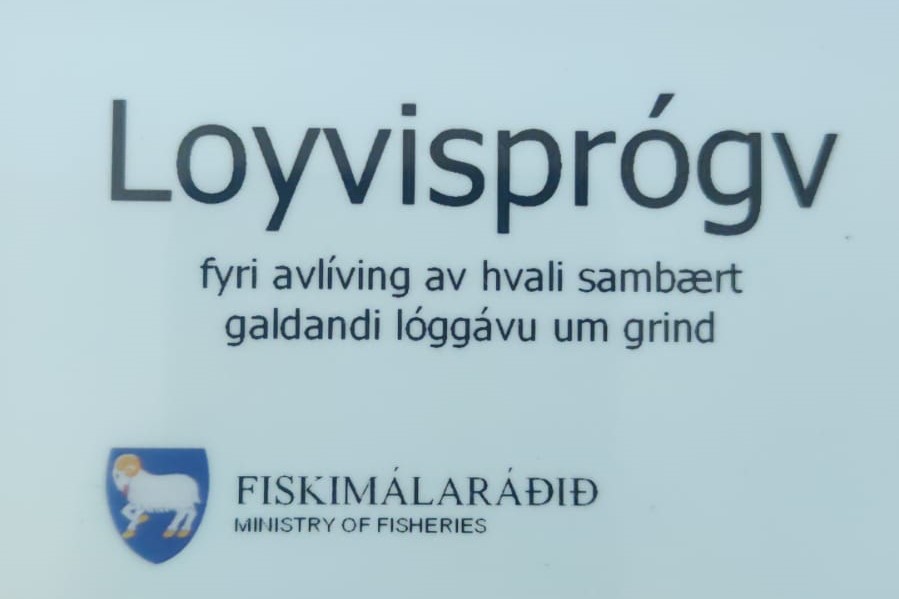 The web pages for Operation Bloody Fjords are at:
https://www.seashepherd.org.uk/campaigns/operation-bloody-fjords/

The social media page for the campaign is at:
https://www.facebook.com/OpBloodyFjords/

View photos and videos from Sea Shepherd UK’s campaigns including the last 5 years of Operation Bloody Fjords at:
https://seashepherduk.myportfolio.com/

Sea Shepherd UK can be followed at:
https://www.seashepherd.org.uk/ and at https://www.facebook.com/SeaShepherdUK