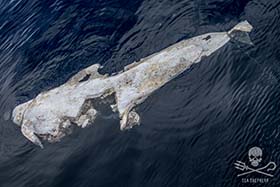 The pilot whale carcass as found with pieces removed from the belly and rope tied around its tail and neck. Photo: Iraultza DariasLast week, while patrolling the waters of the Faroe Islands, the crew of the Sea Shepherd ship, Sam Simon, discovered the carcass of a pilot whale floating in the waters just outside Klaksvík in the Kalsoyar fjord in the northeast of the archipelago.

On closer inspection, the Sea Shepherd crew made a number of gruesome and disturbing observations: 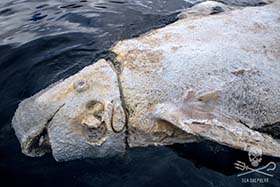 The number 30 carved into the pilot whale’s cheek, and the rope around the pilot whale’s neck, are clearly visible. Photo: Iraultza DariasThe July 23 Tórshavn grindadráp was the only slaughter at which Sea Shepherd crews were not present for the entire time during the meat distribution process, and therefore the only slaughter this year that Sea Shepherd crews are unable to confirm that all of the meat was distributed. As such, Sea Shepherd suspects that pilot whale number 30 was slaughtered at the Tórshavn grind.

However, three questions still remain unanswered: Why was the pilot whale carcass so intact? Why wasn’t all of the meat from the pilot whale distributed, as standard grindadráp practice would dictate? And why does it appear as though the pilot whale was weighted in order to make it sink?

Sea Shepherd Land Team leader, Rosie Kunneke, suspects that many of the pilot whales that were killed at the Tórshavn slaughter were simply discarded, as there were too many animals for local authorities to process before the meat fouled.

Speaking from South Africa, Kunneke stated, “The Tórshavn slaughter took place late at night on July 23, which means the meat was not distributed until the next day. Given this, as well as the sheer number of pilot whales that were killed, it’s highly likely that the meat perished before it could be distributed. These beautiful creatures were then probably just dumped out to sea and weighted down in an attempt to cover-up this disgusting waste of life.” 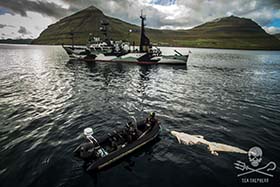 The crew of the Sam Simon makes the gruesome discovery, and sends the small boat to investigate further. Photo: Sea Shepherd

Such wastage is not unheard of. In 2010 following the slaughter of 62 pilot whales at the killing beach of Viðvík, reports indicate that the bodies of most of the pilot whales were thrown away. Like the July 23 Tórshavn slaughter, the whales had been killed late at night, so the meat distribution was left until the next day. As a result, the majority of the meat had gone bad and, therefore, was discarded.

CEO of Sea Shepherd Global, Captain Alex Cornelissen, said, “This evidence completely discredits any claims made by the whale killers that the pilot whale meat is needed for food. How much need can there be if pilot whales like this one are simply being thrown back to out to sea after they have been slaughtered? This is just further proof that the motivation behind the grindadráp is the killing itself. This is an abhorrent, cruel, pointless and outdated practice that has no place in the 21st century.”

On Tuesday, Sea Shepherd crewmembers visited Tórshavn police station to demand further information about what happened to the bodies of the 142 pilot whales slaughtered at Tórshavn on July 23. However the sysselmann, who is a police officer and also the administrator of the local grindadráp, stated, “I do not talk with people from Sea Shepherd.” 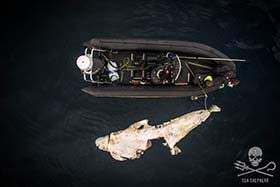 The carcass was measured at 5.6 meters long, a similar length to the small boat. Photo: Sea Shepherd 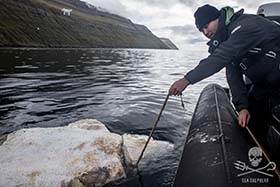 Sea Shepherd crewmember holds the rope that was found, tied around the whales neck and tail. Photo: Iraultza Darias
Tweet