On August 2, 2017, the non-profit organization’s research vessel, the R/V Martin Sheen, was sailing in B.C.’s Nodales Channel led by renowned Canadian biologist Alexandra Morton. It is on a research mission that includes stopping at various salmon farms along the coast to conduct audits for disease and other factors. 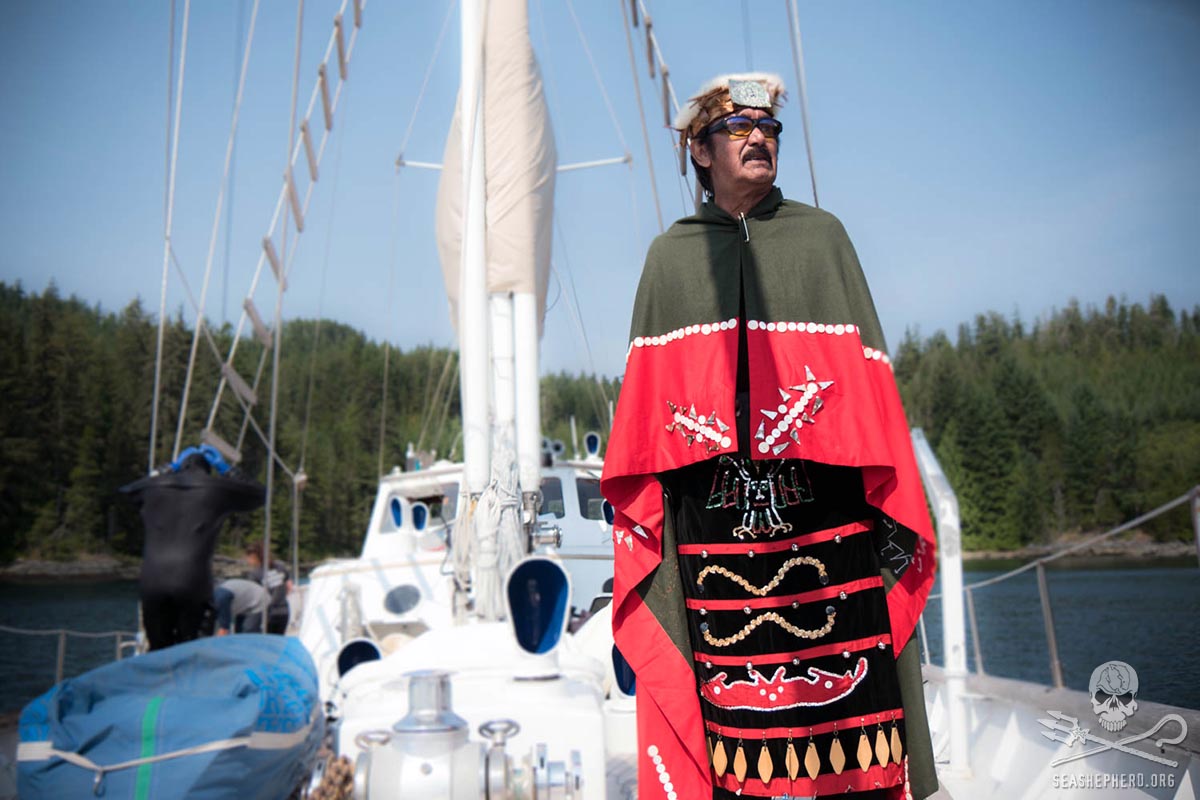 Hereditary Chief Geroge Quocksister from the Laichwiltach Nation. Photo by Carolina A. Castro

Hereditary chief George Quocksister of the Laichwiltach Nation was also on board the R/V Martin Sheen to welcome the Sea Shepherd crew and its researchers in to his Discovery Islands territory.

During the stop at Sonora Point, Quocksister spotted what appeared to be small, baby wild fish inside a couple of Marine Harvest salmon pens. The pens had already been harvested and emptied of any farmed salmon.

When Quocksister inquired as to what kind of fish were inside those pens, one Marine Harvest salmon farm worker told the chief there was “no fish” in the pen.

This was a cause for concern for Quocksister as salmon farms are not only a breeding ground for disease and parasites, which spread to the surrounding waters, but they also trap wild fish. Wild fish in open-net salmon farms cause a chain reaction throughout the surrounding ecosystem, affecting all who depend on wild fish for survival.

According to its website, Norwegian-based Marine Harvest bills itself as one of the largest seafood companies in the world’s as well as the largest producer of Atlantic salmon.

However, Marine Harvest was also found guilty by the provincial court of British Columbia for possession of wild herring back in 2012. 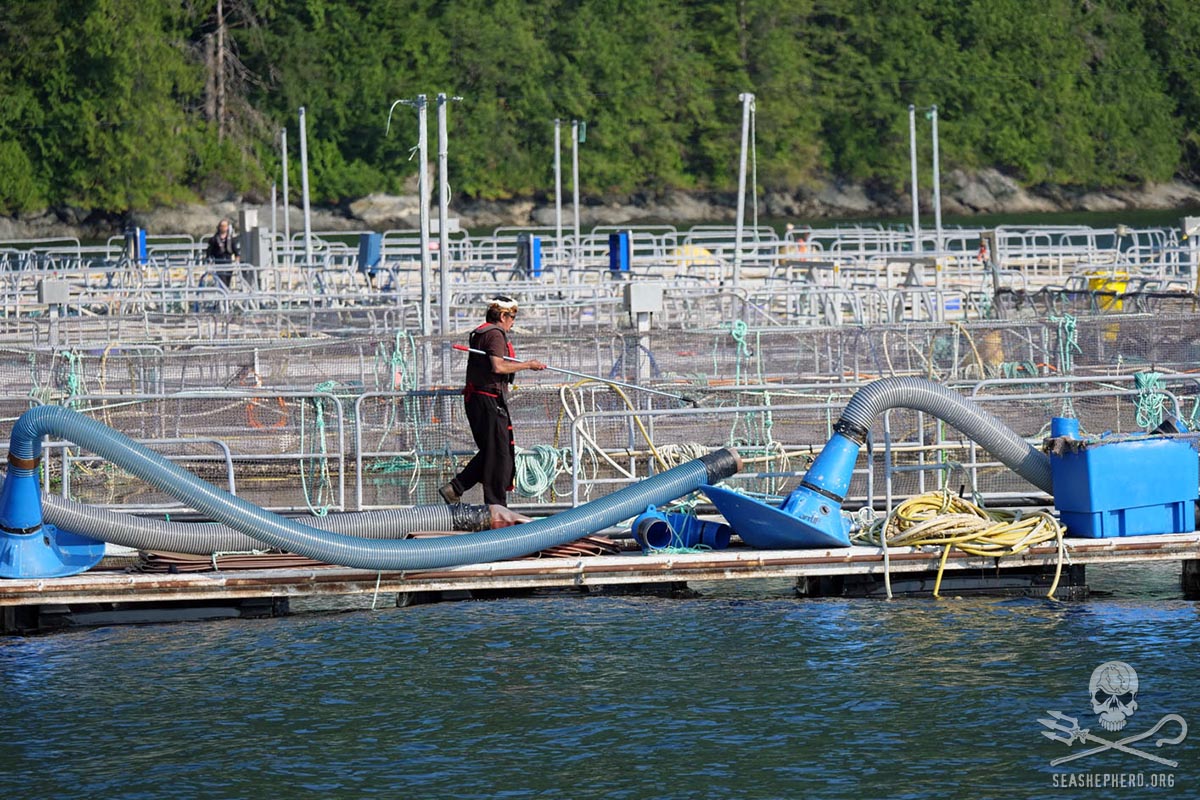 Quocksister attempted to notify the Department of Fisheries and Oceans to have them come out to the salmon farm and investigate. No  representatives appeared.

To collect hard evidence of what he believed was wild fish trapped in salmon pens, Quocksister used a GoPro waterproof camera and boarded the Marine Harvest salmon farm. His suspicions were confirmed when his footage revealed thousands of wild fish, including herring and capelin, trapped in .5m at the surface where they could not escape the sun and were unable to feed.

The pens where the wild fish were trapped had been harvested, all the farmed salmon had been removed and the nets largely pulled up. It is unclear why Marine Harvest did not release the wild fish.

“Those baby fish are starving in the pens and are going to die in there,” said Quocksister. “They are what keeps this coast alive. In this area, there are no more eagles flying around because there are no more fish for them to eat. Every year, our wild fish vanishes more and more. There are probably 130 salmon pens up and down these channels – imagine how many of our wild stock fish are trapped in there 365 days a year!”

Herring are a keystone species that feed wild salmon, eagles and many other species. They have been in decline in the coastal B.C. areas where salmon farms are present. Because of this, many commercial herring fisheries are now closed to protect these fish.

“I am grateful to Sea Shepherd Conservation Society and hereditary Chief George Quocksister for the opportunity to document the true cost of this industry to the coast of British Columbia,” said Alexandra Morton, who led the inaugural Sea Shepherd research mission last summer and is now back to continue her work.

“We are here to investigate the impacts that salmon farms have on the marine environment and today we saw wild fish trapped inside these farms pens,” said Operation Virus Hunter II campaign leader Carolina Castro. “These fish are not supposed to be there; their valuable populations are already compromised. This is hard evidence of the negative impacts these farms are having on the oceans.” 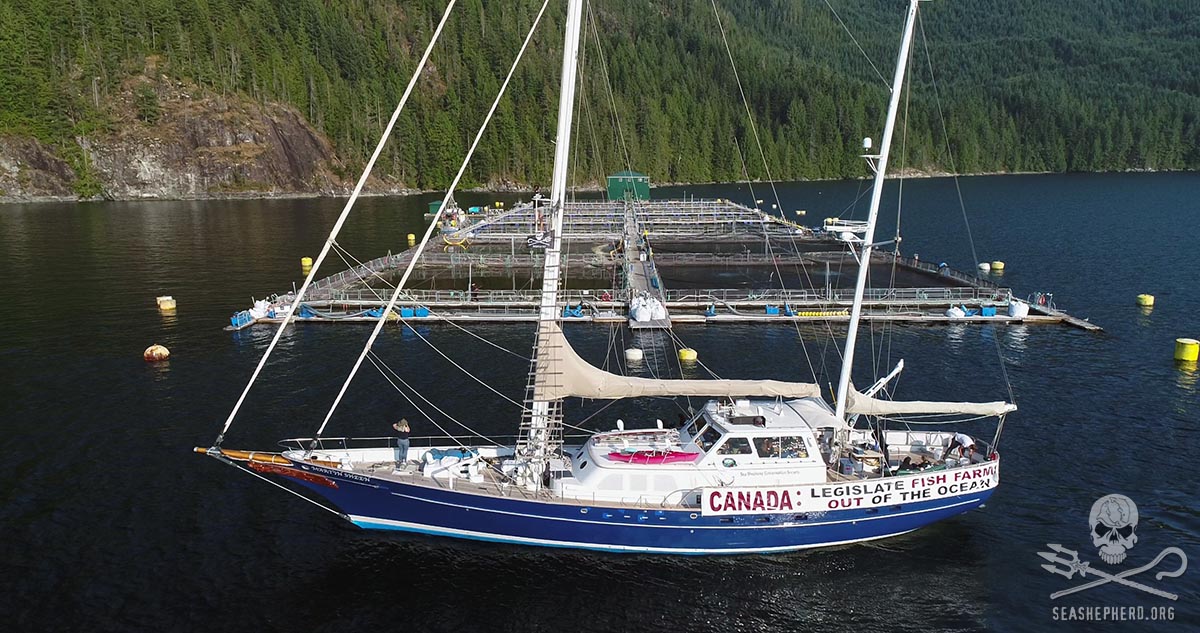 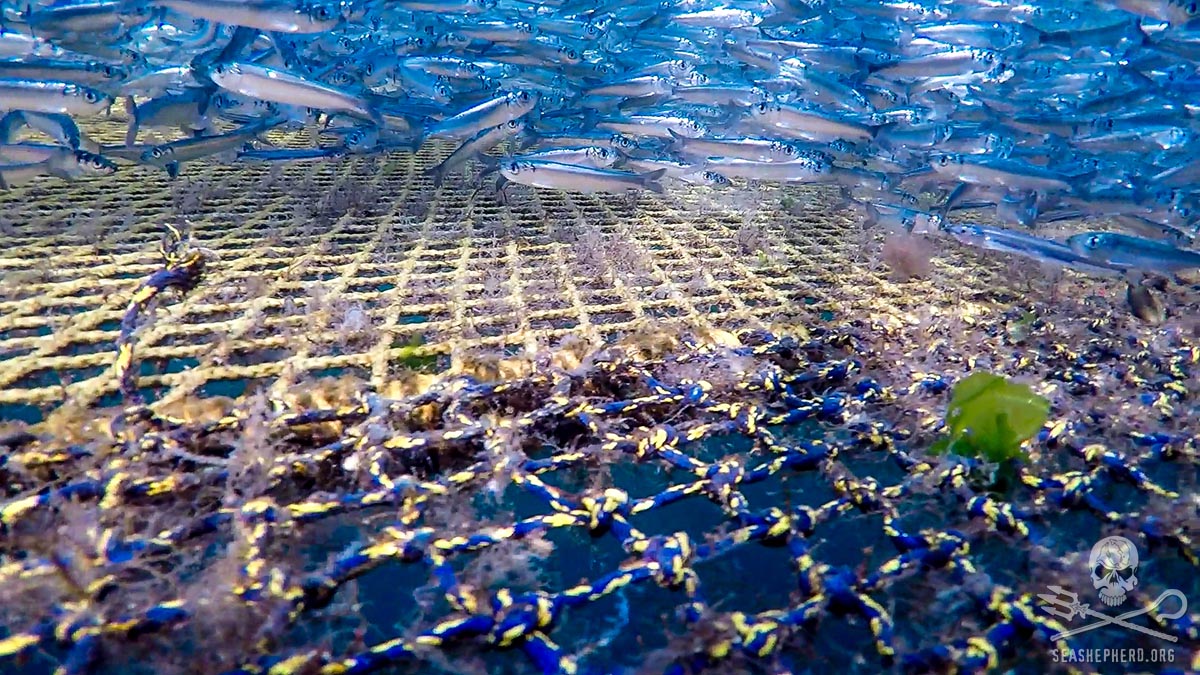