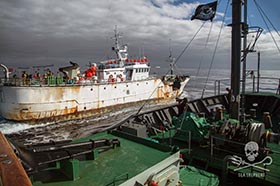 The Kunlun manoeuvres dangerously close to the Sam Simon. Photo: Giacomo GiorgiThe Sea Shepherd conservation ship, Sam Simon, has successfully defended against the aggressive actions of the wanted poaching vessel, Kunlun, as it engages in a hot pursuit of the vessel. Despite an attempt by the poachers to flee through drift ice and numerous close quarter intimidations, the Sam Simon has chased the Kunlun out of its hunting grounds in the Australia's Exclusive Economic Zone, into the high seas of the Southern Ocean.

Captain of the Sam Simon, Sid Chakravarty, said, “In an attempt to hide their illegal operations and deter us from our pursuit, the poachers first made a dangerous attempt to flee through thick drift ice. When that failed, they tried to intimidate us, making multiple, intentional approaches to my vessel which resulted in dangerous, near collision situations. We have maintained our pursuit for 40 hours in spite of these aggressive, illegal actions, during which time the poachers have been unable to engage in further illegal fishing. The captain and officers of the Kunlun have remained hidden behind drawn curtains throughout the pursuit. Bullies are often the biggest cowards and the Kunlun is no exception to this.”

The Kunlun and the Sam Simon are now headed in a northerly direction, approximately 2,500 nautical miles southwest of Australia.

The incident was the second such attack on the Sam Simon in as many days. On Monday, the poaching vessel, Yongding, turned aggressively towards the Sam Simon, crossing within 10 metres of the conservation ship, narrowly avoiding a collision.

The Yongding eventually split from the chase and was last seen by the Sam Simon, heading in an easterly direction.

“Australia's Antarctic Territory is under attack from these poachers. We have maintained our pursuit of the Kunlun, and will not let them engage in any further illegal fishing activity. However, thanks to the mute response from the Australian government, who maintain an embarrassing silence in the face of this invasion in Australian waters, one more poaching vessel is now on the loose in the Southern Ocean,” said Captain Chakravarty.

The Interpol-listed poaching vessels, Kunlun and Yongding, were intercepted by the Sam Simon on Monday, just 50 nautical miles from the coast of Antarctica, inside Australia's Exclusive Economic Zone.

Both the Kunlun and the Yongding are on the Commission for the Conservation of Antarctic Marine Living Resources (CCAMLR) blacklist of Illegal, Unregulated, Unreported (IUU) fishing vessel, and are believed to have links to known Spanish crime syndicate, Vidal Armadores.

Meanwhile, fellow Sea Shepherd ship, Bob Barker, continues its record-breaking pursuit of the Nigerian-flagged poaching vessel, Thunder. For the past five days, the pursuit has been heading in an easterly direction. The vessels are now 3,000 nautical miles from the west coast of Australia.