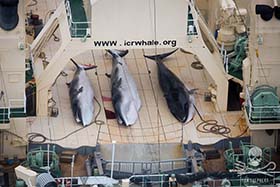 Dead Minke Whales on the deck of the Nisshin Maru. Photo: Tim WattersCEO of Sea Shepherd Global, Captain Alex Cornelissen, has condemned Japan’s plans to return to the Southern Ocean to slaughter whales this austral summer.

Despite on-going legal and scientific condemnation, Japan has persisted with its plans to continue poaching whales in the Southern Ocean. On Saturday, the Japanese Fisheries Agency officially notified the International Whaling Commission (IWC) that it is readying the harpoons of its whaling fleet to return to the waters of Antarctica.

Sea Shepherd has again called on Australian Prime Minister Malcolm Turnbull to intervene to ensure that the whale poachers do not depart from Japan.

“Prime Minister Turnbull has a duty to ensure that the dire matter of Japan’s whale poaching operations is at the top of the agenda when he visits Japan in December,” said Sea Shepherd Australia Managing Director, Jeff Hansen. “It must be made clear to Japan that whaling in the Australian Whale Sanctuary is a criminal act and that Australia has the international responsibility to intervene and arrest criminals operating in our waters” he continued.

On March 31 2014, the International Court of Justice (ICJ) declared Japan’s whaling program to be commercial and illegal, and ordered that it immediately cease.

Initially, the government of Japan said that it would abide by the ruling. However, within months Japan had unveiled its plans for new whaling program titled NEWREP-A, under which a further 4 000 protected Minke whales would be slaughtered over a 12 year period. 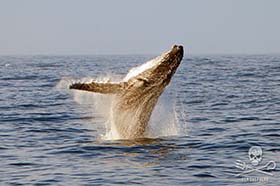 Humpback whale breaching. Photo: Tim WattersSince the release of the program, scientific authorities across-the-board have rejected NEWREP-A, affirming that Japan has failed to provide any scientific grounds for the continued slaughter of whales in the Southern Ocean.

Unable to fit NEWREP-A within the terms outlined in ICJ’s ruling, the Japanese government sought-out another loophole to enable its poaching operations.

Last month in a special declaration, Japan advised United Nations Secretary-General Ban Ki-Moo that it would deny the jurisdiction of the ICJ in matters pertaining to the “research on, or conservation, management or exploitation of, living resources of the sea,” thereby negating any further legal challenges to its whaling program in the international court.

Then on November 18 2015, the Australian Federal Court found the Japanese government-funded whaling company, Kyodo Senpaku Kaisha Ltd, guilty of breaching a 2008 order to stop killing whales in the Australian Whale Sanctuary, and fined if AU$1 million for the breach.

Chair of the Sea Shepherd Australia Board, Captain Peter Hammardstedt, said, “The Australian government must defend its laws and the rule of law in its waters. Should the whalers enter Australian waters and target whales in the Australian Whale Sanctuary, as they seem intent on doing, Australian authorities should immediately seize the poacher’s assets.”

The Sea Shepherd ship Steve Irwin, currently docked in Melbourne, Australia, has been undergoing preparations for the organization’s second campaign to target illegal toothfish operators in the Southern Ocean.

“Sea Shepherd is an anti-poaching organization. We are ready to find, document, report on and where possible intervene against poaching operations that threaten the precious balance of life in the Southern Ocean; whatever form those poachers might take, whatever life they threaten,” said Cornelissen. “If Sea Shepherd comes across criminal activity, then our history speaks for itself. We will, as always, directly intervene to prevent that crime from taking place,” he concluded.