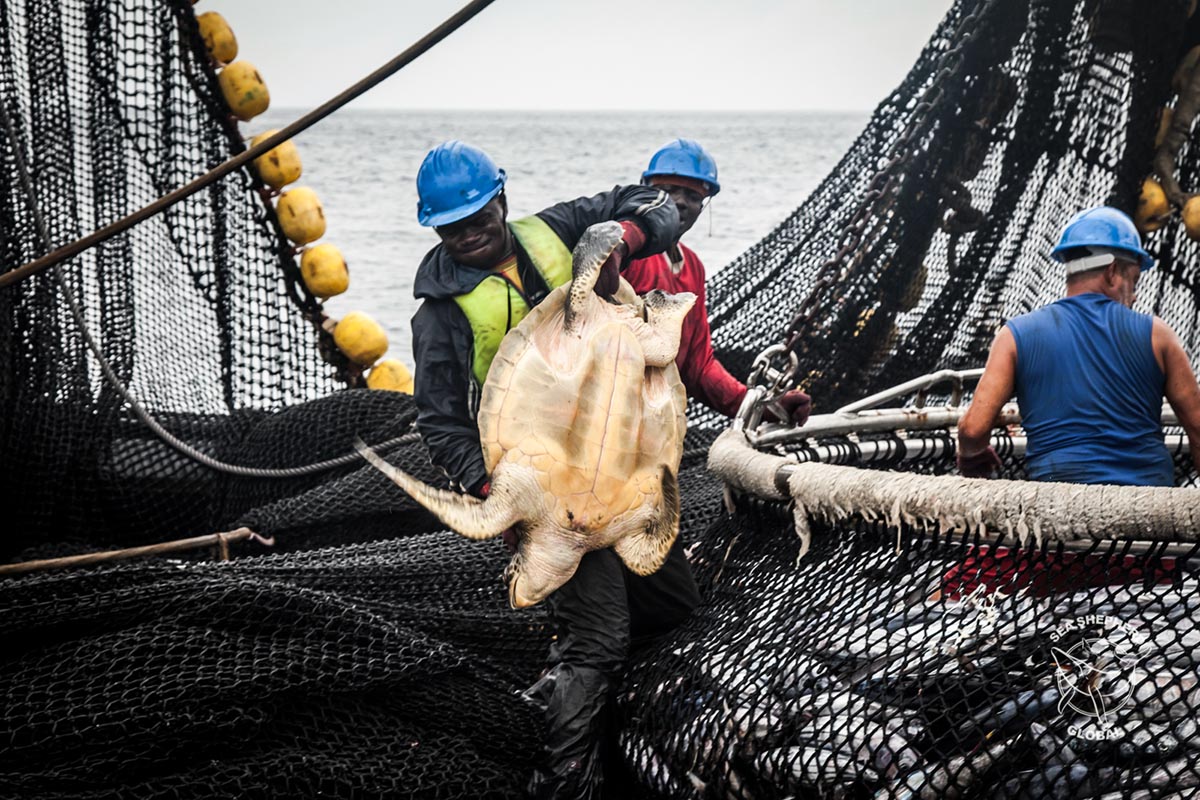 Turtle by-catch being discarded on the Montecelo. Tara Lambourne/Sea Shepherd.

With the arrival of the M/Y Bob Barker in Bremen, Germany for three months of repair work and maintenance, a joint operation between Sea Shepherd and the Gabonese government to tackle illegal, unregulated and unreported (IUU) fishing in Central West Africa, has officially concluded.

The campaign, Operation Albacore II, aimed to expand existing monitoring, control and surveillance measures to detect and deter IUU fishing activity, while also monitoring legal compliance by licensed fishing operators in the waters of the Republic of Gabon. During a four-month period, Gabonese Navy (Marine Nationale) and officers with the Gabonese Fisheries Enforcement Agency (ANPA) were stationed on board the Bob Barker, working alongside Sea Shepherd crew to patrol Gabon's sovereign waters. Admiral Giuseppe de Giorgi, the former Chief of the Italian Navy also crewed on the Bob Barker with Sea Shepherd, contributing his experience and skills to increase law enforcement capability in the region.

One week after the launch of Operation Albacore II, the Sea Shepherd vessel Bob Barker assisted Gabonese authorities in the arrest of two illegal fishing trawlers on the border between Gabon and Congo-Brazzaville.

The two trawlers, Haixin 23 and Haixin 28, flagged to China, were intercepted when five fishing vessels were observed by radar crossing the border between the Republic of Gabon and the Republic of Congo under the cover of darkness, with their fishing gear deployed and actively fishing.

Armed Gabonese marines boarded and secured the two trawlers without injury or incident as ANPA officers inspected the vessels. The other three trawlers escaped across the border into Congolese waters but have been deterred from continuing to fish illegally in Gabon.

Sea Shepherd also helped Gabonese ANPA officers uncover systematic non-declaration of by-catch, a term used to describe non-target species killed in pursuit of another, on board the El Salvador-flagged fishing vessel Montecelo during a routine boarding and inspection. Failure to declare by-catch is a violation of Gabonese law, since monitoring by-catch is a critical component in measuring the total environmental impact of a fishery.

The Montecelo was observed discarding by-catch including endangered Hammerhead and silky sharks. When the vessel was latter inspected, the dead sharks had not been logged. Infringement proceedings have commenced against the Montecelo.

Sea Shepherd’s discovery on board the Montecelo is part of a large-scale problem uncovered by Operation Albacore of non-declaration and under-declaration -- by as much as a factor of 3 or 4 -- of by-catch by tuna fishing vessels in Gabonese waters. Through monitoring and documentation, Sea Shepherd is assisting Gabonese authorities in their efforts to mitigate incidental mortality and serious injury caused as a result of by-catch.

One year after the arrest of the Spanish-flagged long-line fishing vessel Alemar Primero for violating the European Union Ban on Shark Finning in São Toméan waters, Sea Shepherd and Gabonese authorities assisted São Tomé and Príncipe in exposing another shark finning operation, this time by the Baz, also from Spain. Similar to the Alemar Primero, which was arrested with 87 tons of sharks and shark fins, the Baz, licensed to fish for ‘tuna and similar species’, was discovered to be carrying 69 tons of processed sharks and shark fins. Sea Shepherd has been assisting the São Toméan fisheries department to seek penalties against the Baz through the European Union Directorate-General of Maritime Affairs and Fisheries. Sea Shepherd is determined to assist São Tomé and Príncipe in stopping shark finning in their waters.

On the 5th of June 2017, President Ali Bongo Ondimba of Gabon announced the creation of nine new marine parks and 11 aquatic reserves, ensuring that more than 26% of Gabonese waters receive protection. This network of marine protected areas (MPAs) is the largest in Africa.

At the turn of the year, the laws and regulations conserving those MPAs will be enforceable under the law.

“With new conservation laws and measures comes a need for increased law enforcement, which is why Sea Shepherd is committed to continuing our proud partnership with the Gabonese Navy, the Gabonese Fisheries Enforcement Agency and the Gabonese National Park Service in defense of ‘Africa’s Last Eden’. As Sea Shepherd’s programs to assist countries to combat IUU fishing expands to include other African coastal states, most recently the Republic of Liberia, we are proud of the foundation laid by our relationship with Gabon, a landmark example of the achievements that can be made when civil society and government work together to stop IUU fishing”, said Director of Campaigns Peter Hammarstedt.