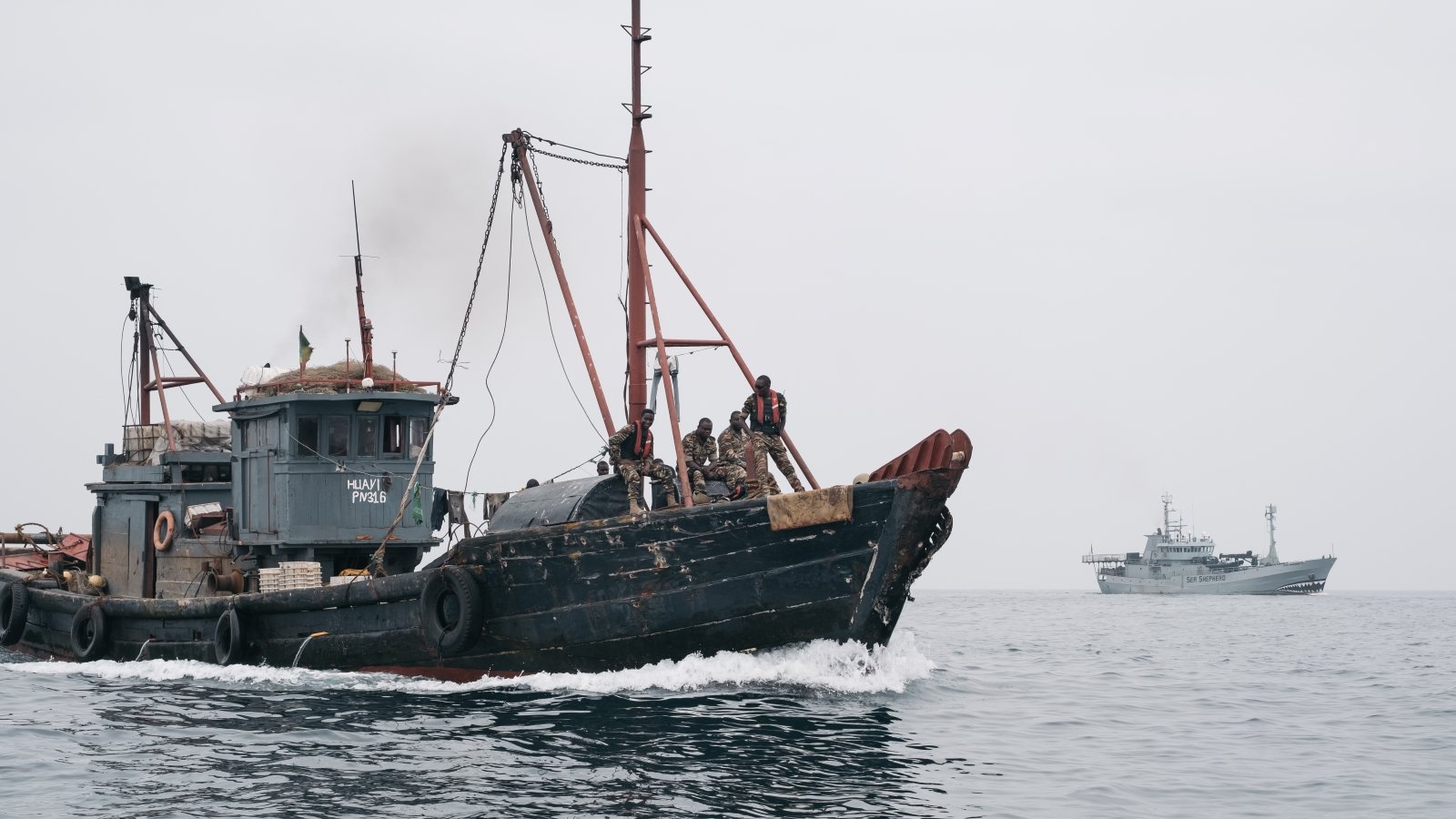 With the departure of the M/Y Bob Barker from Port Gentil, Gabon, Operation Albacore III, officially concluded. As on previous Operation Albacore campaigns, Gabonese Navy (Marine Nationale) and inspectors with the Gabonese fisheries enforcement agency (ANPA) were stationed on board the Bob Barker, working alongside Sea Shepherd crew to patrol Gabon’s sovereign waters.

With the legal protections of the largest network of MPAs in Africa – nine new national marine parks and 11 new aquatic reserves created by President Ali Bongo Ondimba’s initiative to conserve more than 26% of Gabon’s waters – rangers with Gabon’s National Agency of National Parks (ANPN), joined the four-months of at-sea patrols. 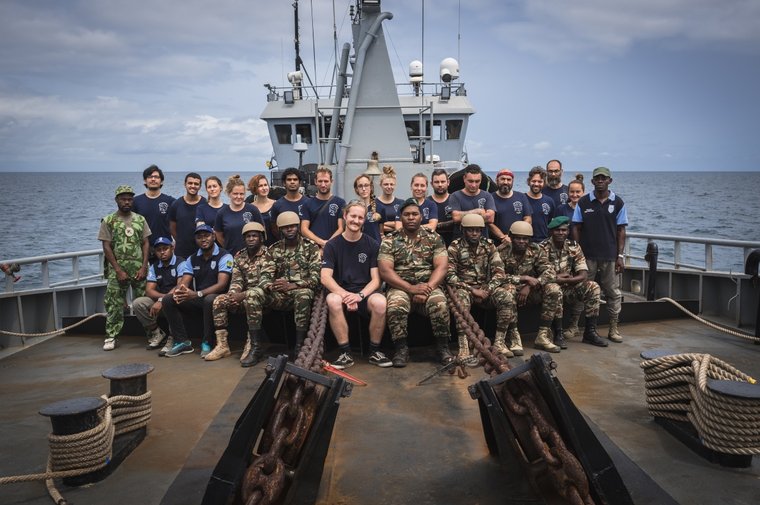 Operation Albacore III commenced with the arrest of the Hua Yi 5, a Congolese-flagged trawler caught in the act of fishing without a license in Gabonese waters in the Grand Sud du Gabon Aquatic Reserve on the border with Congo-Brazzaville.

That arrest preceded the bust of two other trawlers, this time on the northern border between Gabon and Equatorial Guinea. The fishing vessels Jin Li 961 and Jin Li 962, two Chinese-flagged trawlers, were caught by the Bob Barker as they crossed from Equatorial Guinea into Gabonese waters to poach fish in the Cap Esteria Aquatic Reserve, a designated no-fishing area. On board one of the trawlers, Gabonese inspectors discovered a finned tiger shark. Both vessels remain detained in the Port of Libreville.

After the arrests on the northern and southern borders of Gabon, the patrols had their desired effect of deterring fish pirates, as no subsequent incursions were detected. 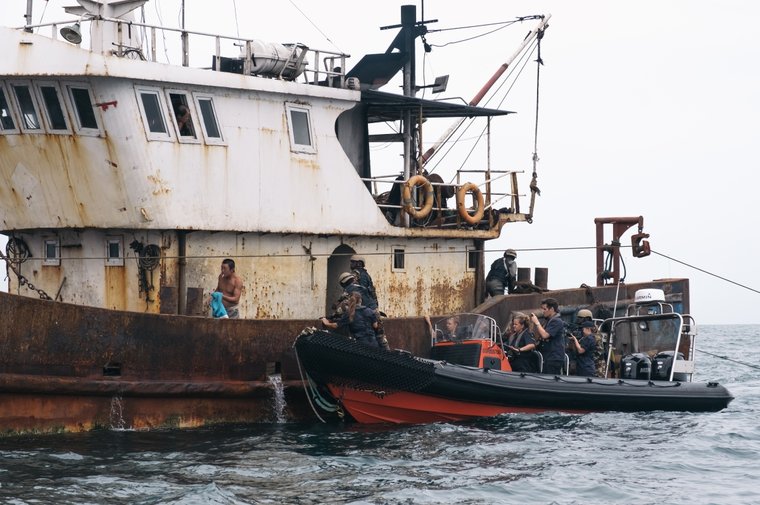 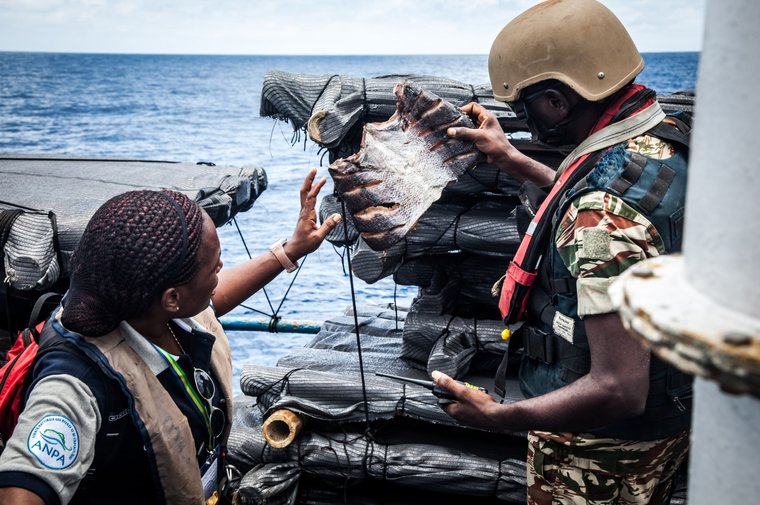 Law enforcement agents from Gabon's National Fisheries Agency and the Gabonese Navy carry out inspections while on patrol. Photo by Tara Lambourne/Sea Shepherd.

Operating from on board the Bob Barker, the São Toméan Coast Guard together with São Tomé and Príncipe’s fisheries inspectors, arrested a Senegalese-flagged, but Spanish-linked, long-line fishing vessel for finning sharks.

Although the long-liner was licensed to fish for ‘tuna and similar species’, inspections revealed that the fish holds of the fishing vessel Vema were solely filled with two tons of sharks, predominately blue sharks that classified as ‘near-threatened’ by the International Union for Conservation of Nature (IUCN). Shark fins were severed from their corresponding torsos.

São Toméan fisheries regulations that prohibit processing of sharks at-sea are conservation measures that ensure shark bodies are not discarded at sea to make room for the more valuable shark fins, therefore allowing far more sharks to be killed.

The arrest of the Vema is the fourth shark-finning bust carried out over the past two years, three of which were the direct result of joint operations between São Tomé and Príncipe and Gabon, with assistance by Sea Shepherd ships and crew. 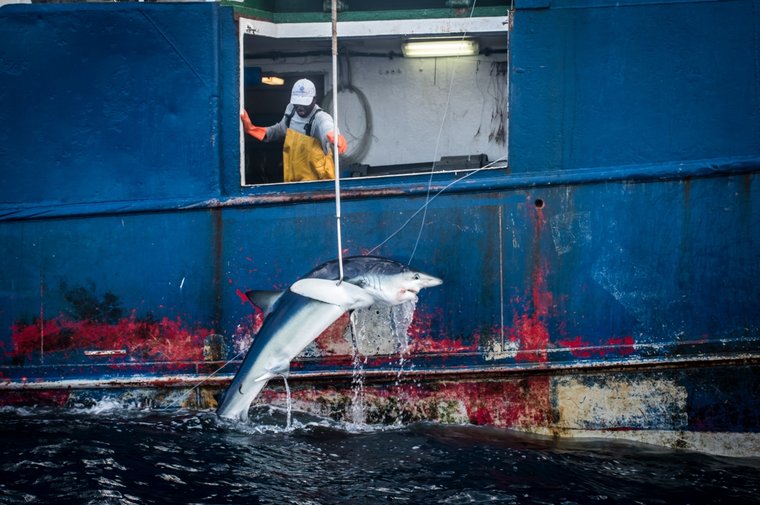 A shark being pulled onto the fishing vessel Vema in São Tomé and Príncipe waters. Photo by Tara Lambourne/Sea Shepherd. 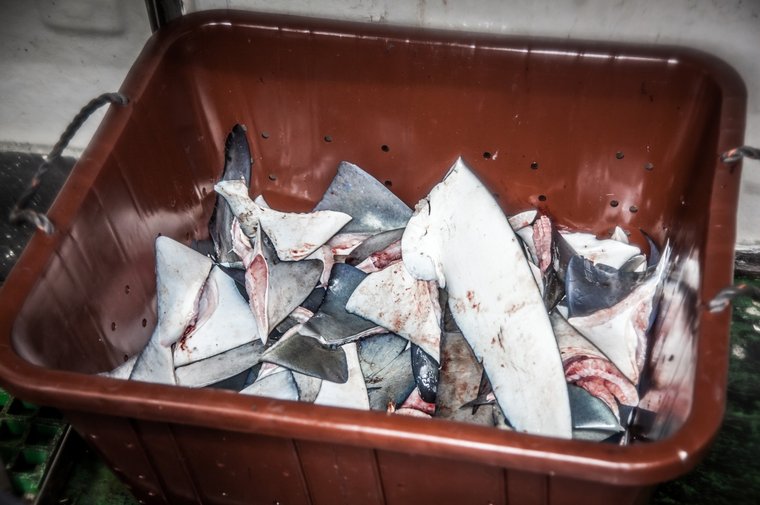 A container of shark fins found on board the Vema, an industrial fishing vessel arrested in São Tomé and Príncipe. Photo by Tara Lambourne/Sea Shepherd.

Deliberate Setting of Nets on Whales and Whales Sharks Banned

Three years of Operation Albacore patrols, coupled with monitoring by Gabonese fisheries observers, have revealed that some industrial purse seiners were deliberately encircling whales and whale sharks with purse seine fishing nets, knowing that tuna gather around them in search of similar sources of food.

Under the new regulations, if whales or whale sharks are inadvertently caught in the purse seine net, the nets must immediately be opened, even if the fishing vessel risks losing their entire catch of tuna in the process. The regulations will save the lives of many marine mammals and whale sharks - and showcase the importance of boarding and inspections of legal operators at-sea. 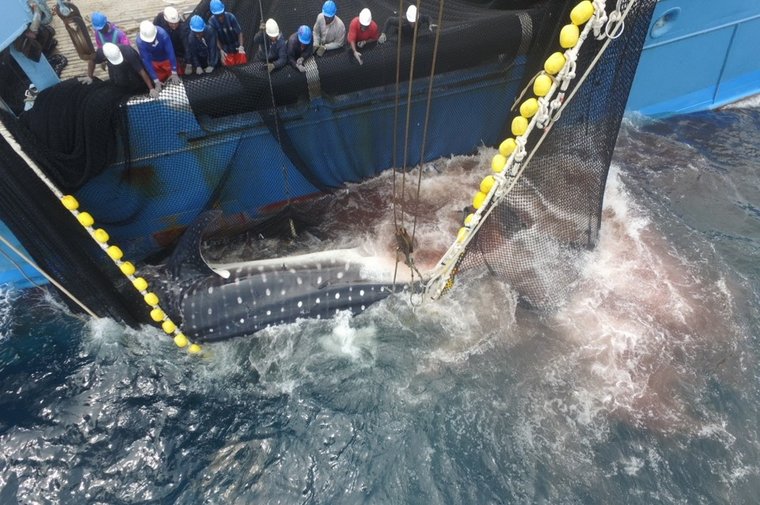 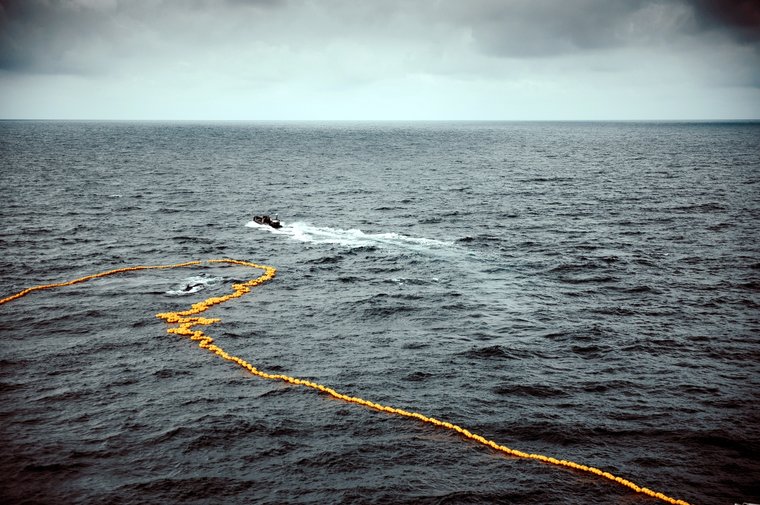 Before Operation Albacore, fish aggregating devices, more commonly called FADs, were unregulated. A FAD is a floating object, usually made of plastic, that attracts fish. Sonar and satellite communications equipment fitted to the high-tech FAD alert fishing vessels to the presence of fish. FADs are problematic because they lead to higher numbers of by-catch, or the unintentional catch, of sharks and juvenile fish. In the case of the latter, fishing on FADs in Gabonese waters has resulted in almost 80% of the tuna caught being below reproductive age, as opposed to 12% on free schools of tuna. Gabon is now regulating the number of FADs that can be deployed by ship - and there is a movement within Gabon to ban FADs all-together. That movement will save countless sharks. 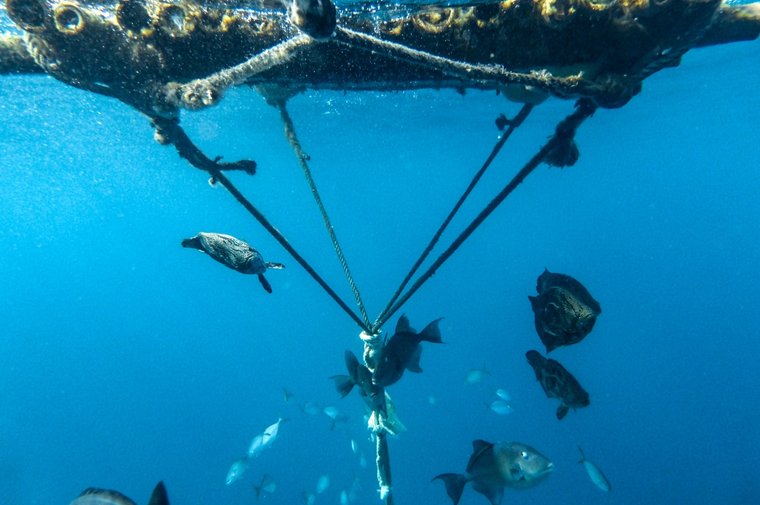 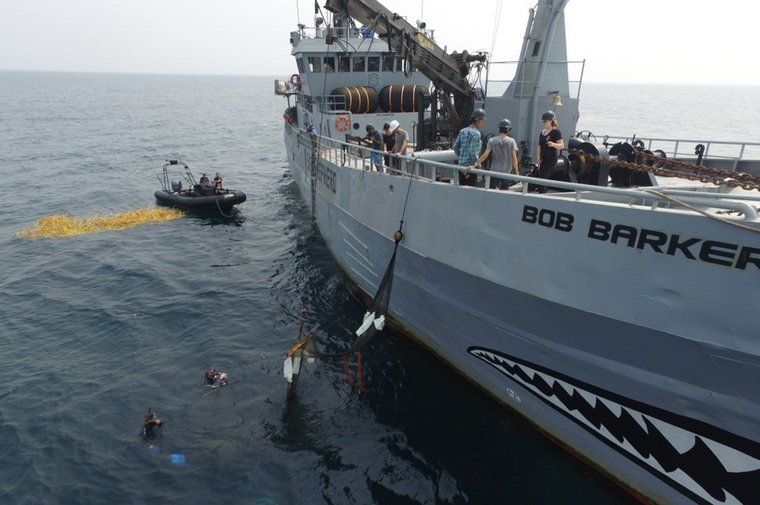 The crew of the M/Y Bob Barker confiscating an illegal FAD. Photo by Lukas Erichsen/Sea Shepherd. 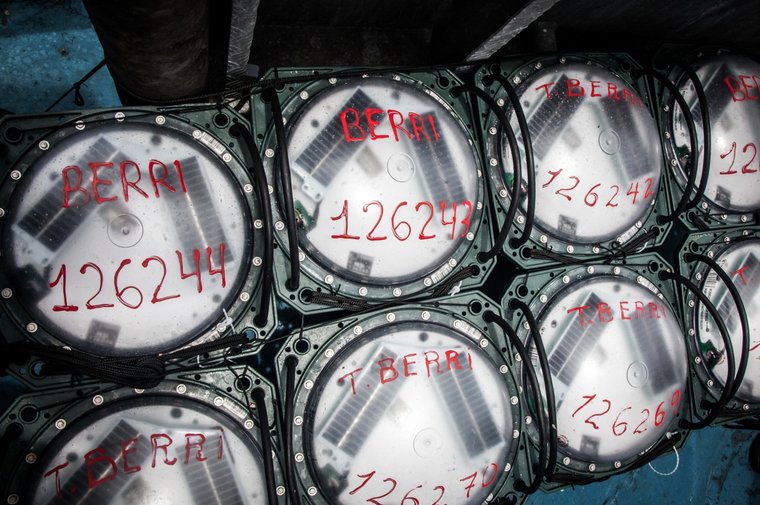 Although Operation Albacore III concludes with the departure of the Bob Barker from Gabonese waters, Sea Shepherd is committed to continue working with Gabon and other regional partners to defend, conserve and protect the Gulf of Guinea from illegal and destructive fishing practices.