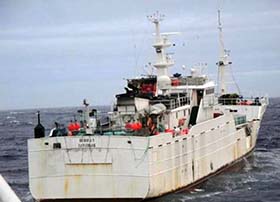 The Songhua, formerly Nihewan and Paloma V is believed to be one of the vessels intercepted by the NZ Navy (Image courtesy CCAMLR)Today, the New Zealand Navy intercepted two illegal fishing vessels in the Southern Ocean.

The New Zealand Herald reports that the Navy intercepted the vessels with illegal catch on board and is now requesting permission to board the vessels.

On December 17, Sea Shepherd intercepted the Nigerian-flagged Thunder, the most notorious of the six toothfish poaching vessels known to be operating in the Southern Ocean. The Bob Barker continues its record-breaking hot pursuit of the Thunder, while its fellow Sea Shepherd ship, the Sam Simon, continues mammoth operations to retrieve the illegal gillnets left behind by the poaching vessel in the Antarctic waters.

Captain Peter Hammarstedt of the Bob Barker has commended the New Zealand Navy on the interception.

“While the New Zealand Navy arrests these two poachers, and Sea Shepherd continues to pursue the Thunder, half of the illegal toothfish poaching operators in the Southern Ocean are shut down. We congratulate the New Zealand Navy and authorities on their action and welcome this historic leap forward in the fight against toothfish poaching,” he said.

The Songhua, formerly Nihewan and Paloma V is believed to be one of the vessels
intercepted by the NZ Navy (Image courtesy CCAMLR)