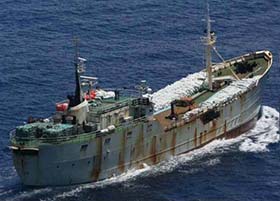 The Perlon was detained with illegally-caught toothfish on board, said to be worth US $6.4 million
(image courtesy CCAMLR)In another devastating blow for illegal fishing operators in the Southern Ocean, the toothfish poaching vessel, Perlon, which was boarded by Australian Customs and Border Patrol near the Cocos (Keeling) Islands at the end of April, has been detained by authorities in Malaysia.

It is reported that 330 metric tons of illegally caught toothfish, worth around US $6.4 million, was confiscated from the vessel when it was detained.

The Perlon is one of six Illegal, Unregulated, Unreported (IUU) vessels known to target vulnerable toothfish in Southern Ocean. The vessels – which Sea Shepherd calls the “Bandit 6” - were the focus of Sea Shepherd's 11th Antarctic Defence Campaign, Operation Icefish, which commenced in December last year.

Of the six vessels that were the target of Operation Icefish, four are no longer in operation. As well as the recent detention of the Perlon, in March two other vessels, the Kunlun and the Viking, were detained by authorities in South East Asia. Then on April 6, the most notorious of the vessels, the Thunder, was scuttled by its own Captain and Officers in the waters of São Tomé and Príncipe off the west coast of Africa, following a four-and-a-half month pursuit by the Sea Shepherd ship, Bob Barker. The Captain, Chief Engineer and Duty Engineer of the Thunder are still being detained by authorities in São Tomé and Príncipe as investigations continue.

Bob Barker Captain, Peter Hammarstedt, has applauded Malaysian authorities for the detention of the Perlon. “Operation Icefish has spearheaded an unprecedented level of international attention on the illegal fishing operators, and has ensured their crimes against the pristine environment of Antarctica will no longer go unnoticed. We applaud the Malaysian authorities for their action against the Perlon, in what is another victory for the oceans,” he said.

Sea Shepherd now calls on authorities to focus their attention on the two “Bandit 6” vessels, the Songhua and the Yongding, which are still at large.

Captain Sid Chakravarty of the Sam Simon said, “With four of the six toothfish poaching vessels now out of action, we have the perfect opportunity to completely eliminate toothfish poaching from the Southern Ocean. We call upon authorities around the world to heighten all efforts to ensure this moment is seized; to focus all attention on the Songhua and the Yongding to ensure that their operations are intercepted, the boats detained, and that the waters of Antarctica are finally rid of the devastation of toothfish poaching, once and for all.”