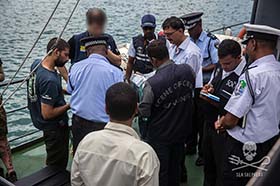 Evidence of the Thunder's illegal fishing is handed-over to Interpol and Mauritian authorities by Sea Shepherd. Photo: Jeff WirthSpanish authorities have raided several premises in the province of A Coruña, Spain, including the former headquarters of Vidal Armadores, a Spanish fishing company with an extended history of links to illegal, unregulated, unreported (IUU) fishing for vulnerable toothfish in the Southern Ocean.

Lead by the Spanish Ministry for Agriculture Food and the Environment (MAGRAMA), the raids are part of a new offensive dubbed Operation Sparrow, whichaims to target Spanish interests in IUU fishing in Antarctica. Authorities have reported that numerous documents confiscated as evidence during the raids will be examined over the coming days in an effort to establish proof of illegal fishing activity.

It is the first time that Spain has enforced new fisheries laws, introduced in January this year, which allow the country to take action against Spanish nationals involved in IUU fishing anywhere in the world.

Information coordinated by international policing agency, Interpol, is believed to have been integral to the development of the operation.

Captain Peter Hammarstedt of the Sea Shepherd ship, Bob Barker, has commended the authorities on their affirmative action.

“We are thrilled by this latest development in the battle to eliminate illegal fishing from the waters of Antarctica, and commend Interpol, MAGRAMA and the Spanish National Police on taking this strong stance against IUU operators. This is a sophisticated, coordinated response and reflects the importance with which international and national authorities are now taking the issue of outlawed fishing in the Southern Ocean,” said Captain Hammarstedt.

On December 17, the Bob Barker intercepted the most notorious of six remaining toothfish poaching vessels, the Interpol-wanted Thunder, on the Banzare Bank in Antarctica. Since then, the Sea Shepherd ship has maintained a continuous pursuit of the poaching vessel, which yesterday entered its 85th day.

Captain Hammarstedt believes that the Thunder has links to Spanish fishing operations.

“Through evidence gathered over the duration of our pursuit, we have come to conclusion that the majority of the officers on board of the Thunder are of Spanish decent, and that the vessel itself is backed by Spanish interests. With the unveiling of Operation Sparrow, we expect that Spanish authorities will be taking a considerable interest in the Thunder when it is escorted back to port by Sea Shepherd,” he said. 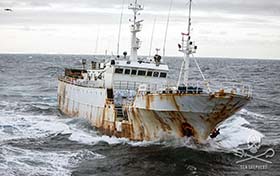 The Yongding is one of two vessels with links to Vidal Armadores, intercepted by the Sam Simon in February. Photo: Jeff WirthLast Friday, fellow Sea Shepherd ship, the Sam Simon, handed-over evidence of the Thunder's illegal fishing activity to local authorities at Port Louis, Mauritius. Acting under the direction of a Criminal Intelligence Officer from international policing organisation, Interpol, the authorities collected sections of illegal gillnet, buoys, nets, lines and anchor shackles which were abandoned by the Thunder when it first fled from the Bob Barker.

Captain Sid Chakravarty of the Sam Simon, said, “The reactions of authorities in Mauritius and Spain indicate a significant increase in momentum in the fight against IUU fishing. We applaud all involved and encourage their on-going diligence in ridding the Southern Ocean of the remaining criminal operators that continue to threaten vulnerable toothfish.”

In February, the Sam Simon intercepted another two toothfish poaching vessels, the Kunlun and the Yongding, in Australian waters in Antarctica. Both vessels have been issued with Interpol Purple notices for illegal fishing activity, and are known to have links with Vidal Armadores.

The Kunlun was last seen by Australian authorities near the Cocos Island (Keeling) on February 26, when customs and border patrol officials boarded the vessel.

The outlawed vessels are the focus of Operation Icefish; Sea Shepherd's 11th Southern Ocean Defence Campaign and the first to target IUU fishing operators in the waters of Antarctica.