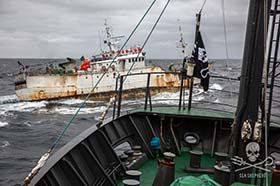 Kunlun dangerously crosses the bow of the Sam Simon, after it was intercepted by the Sea Shepherd ship in February. Photo: Jeff WirthSea Shepherd has responded to news that Australian customs have boarded the Interpol-wanted poaching vessel, Kunlun, commending border patrol for their action, and calling on the arrest of the wanted poaching vessel.

The Kunlun was intercepted west of Cocos Island (Keeling) yesterday. Sea Shepherd suspects the vessel was en route from the Antarctic to Southeast Asia to offload its illegal catch.

The Kunlun has a long history of illegal fishing activity. As well as being included on the Commission for the Conservation of Antarctic Marine Living Resources (CCAMLR) blacklist of Illegal, Unregulated and Unreported (IUU) fishing vessels, just last month the vessel was issued with an Interpol Purple Notice after it was caught fishing illegally in Australian waters in the Southern Ocean by the New Zealand Navy.

On February 2, the Kunlun was intercepted by the Sea Shepherd ship, Sam Simon, again inside Australian waters. The Sam Simon then pursued the vessel out of its hunting grounds in the Southern Ocean.

Captain Peter Hammarstedt of the Sea Shepherd ship, Bob Barker said, “The Kunlun was first intercepted by the New Zealand Navy in Australian waters in January, fishing illegally. Two weeks later, it was still fishing illegally until shut-down by the Sam Simon. The evidence against the Kunlun is overwhelming – we have the images, we have the video and now Australian Customs and Border Protection have the opportunity to seize the illicit catch. We commend the Australian government for boarding the Kunlun. Australia has every right to arrest this poaching vessel and we now expect to see it brought to the nearest Australian port to see justice done”.

Captain Sid Chakravarty of the Sam Simon said, “For the past three months, the Australian government has claimed that taking port action against toothfish poachers is more effective that patrolling. It is encouraging to see that they have changed their tune. We've seen the Australian government take its leadership in the Southern Ocean seriously when they took Japan to the International Court of Justice on the issue of whaling. We now need strong action from Australia to show that illegal fishing will not be tolerated in the Southern Ocean, and that the only action that will see an end to the Kunlun's poaching career is arrest and seizure at sea.”

The Kunlun is one of six vessels that are known to still engage in IUU fishing for Antarctic and Patagonian toothfish in the Southern Ocean.

The Bob Barker is currently engaged in a record-breaking pursuit of the most notorious of the six vessels, the Nigerian-flagged Thunder, after it was intercepted on the Banzare Bank in Antarctica on December 17.