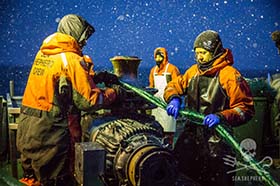 Modifications that have been made to the Sam Simon enable the massive retrieval operation. Photo: Jeff WirthWithin two hours of successfully recovering the 25 kilometre-long illegal gillnet abandoned by the Interpol-listed poaching vessel Thunder, the Sea Shepherd ship Sam Simon reported that it has located a second, “monster” gillnet.

The second illegal gillnet was found on the December 29, 2014 at 62˚ 20' South, 081˚ 18' East, just a few miles from the first net, inside the Commission for the Conservation of Antarctic Marine Living Resources (CCAMLR) area of management.

Using photographic evidence, Sea Shepherd has been able to confirm that the most recent gillnet is also the property of the Nigerian-flagged, Thunder, which fled from the region on December 17.

The crew of Sam Simon has commenced a recovery operation to remove the illegal gillnet from the Antarctic waters. Captain of the Sam Simon, Sid Chakravarty, said, “With more streamlined and efficient operations in round two, I am confident that we will recover the entire length of this net in just a few days. Thereafter I will move on to scout and clear the Banzare Bank of any other nets laid down by the Thunder.”

Based on the the first 24 hours of the retrieval operation, it is expected

that the haul of the “monster” gillnet is twice that of the previously confiscated 25 kilometre-long gillnet. 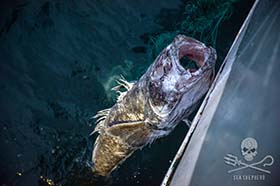 A decaying toothfish, hauled from the “monster” net. Photo: Jeff WirthCaptain Chakravarty said, “This monster net has entangled and suffocated marine life, killing them in the most undignified way imaginable. My decks look like a battlefield with many of the recovered creatures in advanced stages of decomposition. The large number of dead animals that we have documented is proof of the wide-spread destruction that the Thunder has wreaked over its decade-long onslaught on the Southern Ocean. ”

Sea Shepherd has reported the second retrieval operation to the relevant law enforcement authorities, including Interpol, CCAMLR, the Australian Fisheries Management Authority and the Australian Federal Police. The confiscated equipment will serve as physical evidence of the Thunder’s illegal activity and will be handed-over to authorities to aid in prosecution of the Thunder.

A known poaching vessel, the Thunder was issued with an Interpol Purple Notice following a joint effort by Norwegian, New Zealand and Australian authorities, and is currently included on CCAMLR’s black-list of Illegal, Unreported and Unregulated (IUU) fishing operators.

The use of gillnets has been outlawed by CCAMLR since 2004, and the Commission has specifically expressed concerns regarding the impact of this fishing method on the marine ecosystems of Antarctica.

The Sea Shepherd ship, Bob Barker, has been in pursuit of the Thunder for seventeen days and is now in the South Indian Ocean, having escorted the poachers out of the CCAMLR region on December 29. During this time the Thunder has been unable to engage in any further illegal fishing.