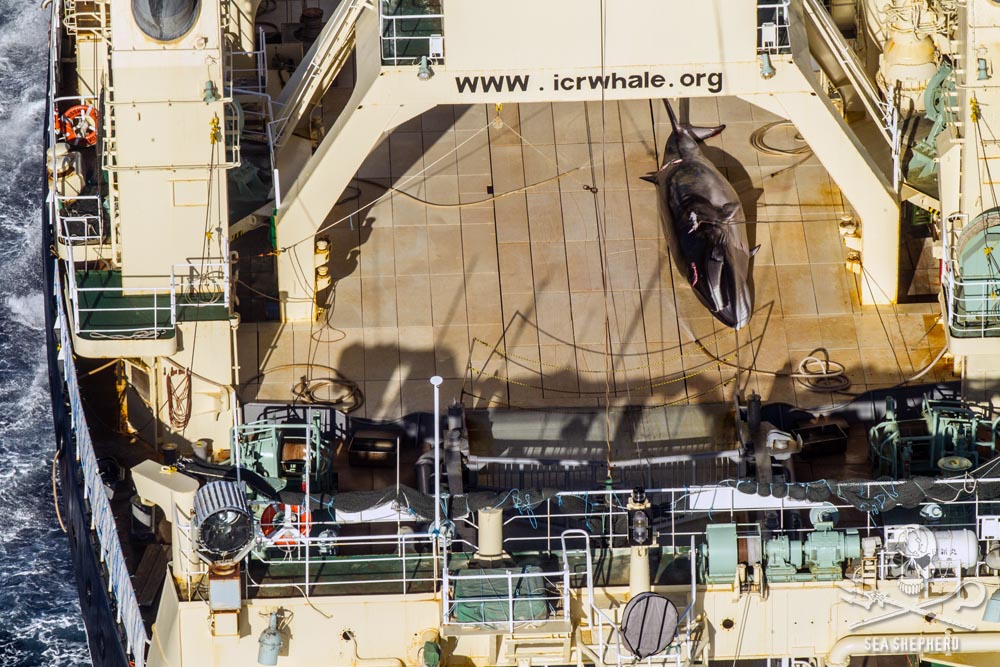 First dead Antarctic minke whale to be documented since the ICJ ruling against Japanese whale poachers After five weeks of patrolling the Southern Ocean, Sea Shepherd has located the Japanese whale poachers’ factory whaling vessel in the Australian Whale Sanctuary with a dead minke whale on its flensing deck, the first to be documented since the International Court of Justice ruled against their whaling operations in the Antarctic in 2014.

The Nisshin Maru was spotted by the helicopter of Sea Shepherd’s MY Steve Irwin at 12:34AM GMT (11:34AM AEDT) at a position of 64 57.6S - 085 09.6E, within the Australian Whale Sanctuary. When the helicopter approached, the Nisshin Maru crew scrambled to hide the slaughtered whale with a tarp, while the fleet’s harpoon ships Yushin Maru and Yushin Maru #2 quickly covered their harpoons.

"The whale killers from the Nisshin Maru were caught red-handed slaughtering whales in the Australian Whale sanctuary,” says Captain Adam Meyerson of the Ocean Warrior, Sea Shepherd’s newest Southern Ocean patrol ship. “The Steve Irwin has shut down their illegal operations and caught them trying to hide the evidence."

These are the first photographs documenting the Japanese whaling fleet’s killing of whales since the International Court of Justice (ICJ) ruled their whaling program illegal in 2014 and the Australian Federal Court found the Japanese whaling industry in contempt for killing protected whales in the Australian Whale Sanctuary. Sea Shepherd’s discovery of the factory ship and the slaughtered whale comes just a day after Japan’s Prime Minister Shinzo Abe was in Australia on an official state visit.

Jeff Hansen, Managing Director of Sea Shepherd Australia stated, "The lack of action by the Turnbull government while whales are being killed in Australian waters just a day after Japan's Prime Minister was on a state visit in Australia shows that the government has no spine when it comes to protecting the wishes of Australians to defend the Southern Ocean Whale Sanctuary."

Sea Shepherd’s helicopter has relayed the whaling fleet's position to the MY Steve Irwin, now on an intercept course with the factory ship. No more whales will be killed today.

“The fact that the Japanese crew went to cover up their harpoons and the dead minke whale on deck just shows that they know what they’re doing is wrong,” says Captain Wyanda Lublink of the MY Steve Irwin. “They know they are in contempt of the ruling of the International Court of Justice and the Australian Federal Court. How can the Australian government ignore these actions when the majority of Australians condemn what they are doing?” 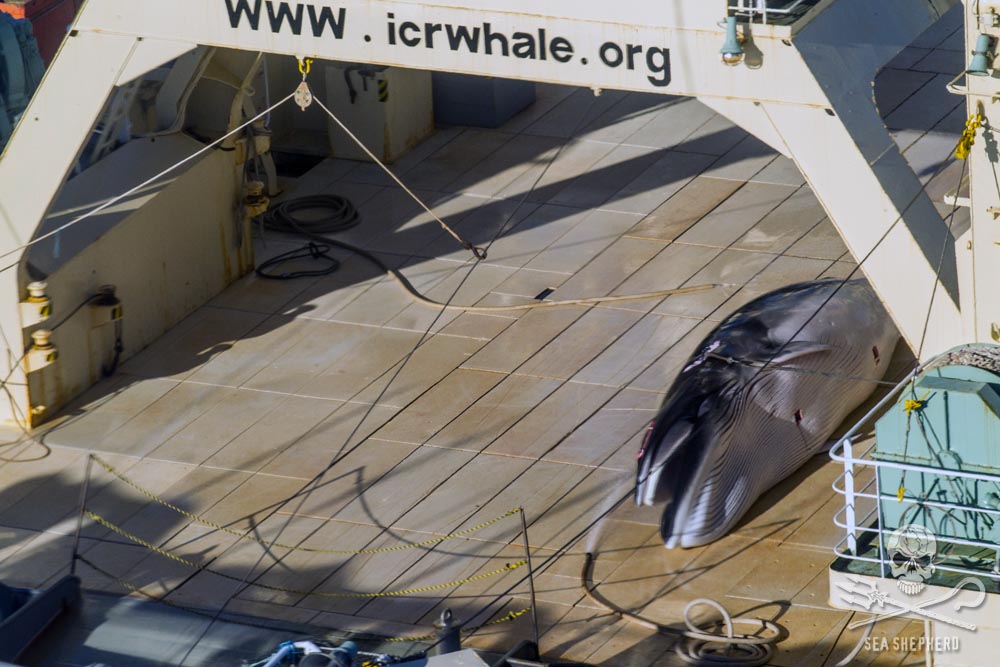 Protected Antarctic minke whale about to be dismembered on the deck of the factory whaling ship, Nisshin Maru 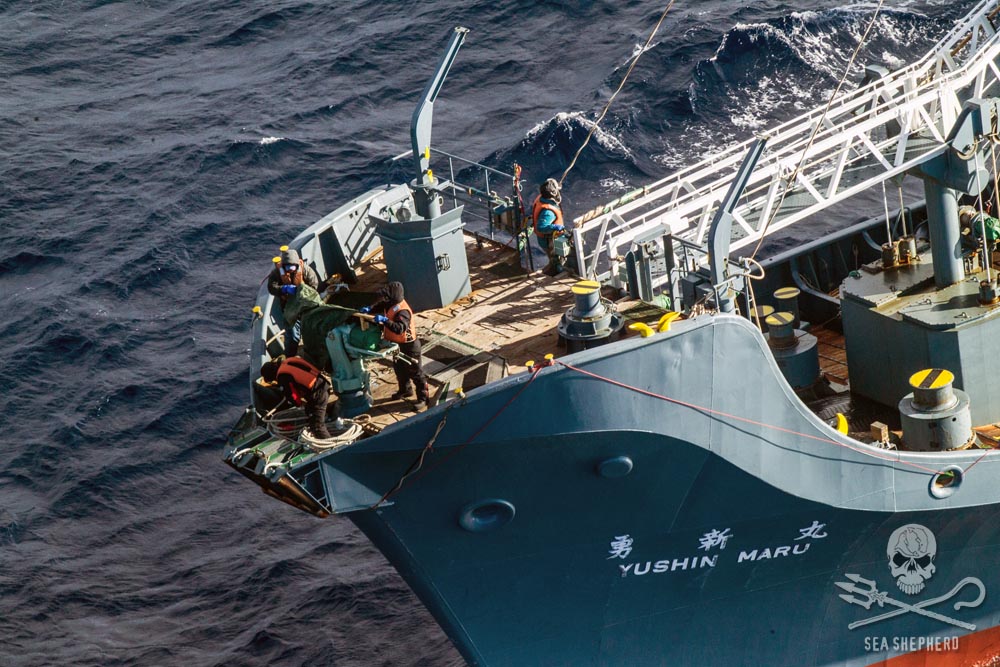 Crew of the Yushin Maru scramble to cover their harpoon 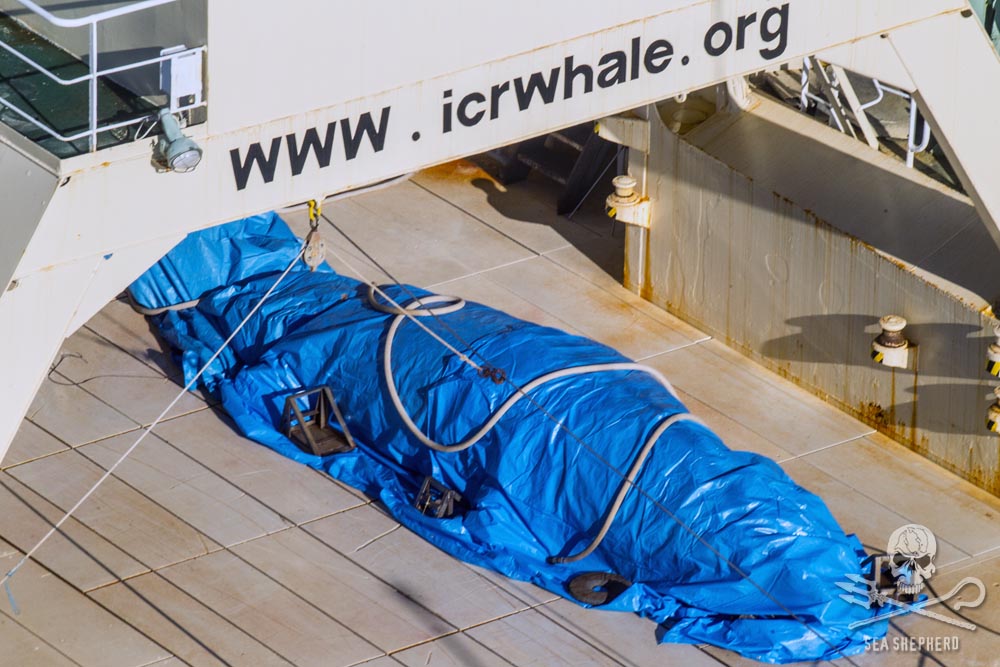 Japanese whalers cover their crimes with a mock body bag