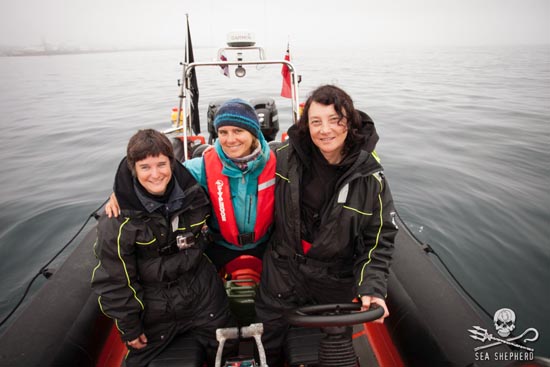 Crew of MV Spitfire on Operation Grindstop 2014. Photo: Sea ShepherdOn Friday July 29th, Sea Shepherd Captain Jessie Treverton from the UK successfully passed through border security and re-entered the Danish Faroe Islands’ capital of Tórshavn for the first time since her arrest in 2014 to demand her court trial and the return of the seized Sea Shepherd vessel MV Spitfire.

This action comes after the Faroese prosecutor failed to set a court date after almost two years since the arrest of Captain Treverton on September 17th, 2014 for successfully guiding a pod of white-sided dolphins away from the killing bays of the Faroe Islands as part of Sea Shepherd Global’s campaign Operation Grindstop. After steering a large pod of dolphins to safety the Danish Navy chased, boarded and seized the British registered vessel MV Spitfire and arrested its three European crewmembers (Jessie Treverton of the UK, Celine Le Diouron and Marion Selighini of France), subsequently charging them with ‘failure to report sightings of dolphins to the authorities’ under the newly introduced ‘Grind Law’ and ‘harassing dolphins’ in an unprecedented interpretation of Faroese animal welfare legislation.

“Apparently in the Faroe Islands it is perfectly legal to drive and kill a protected EU cetacean species, but it is illegal to push them back out to sea in order to keep them from harm’s way because that is considered ‘harassment.’ So these three Sea Shepherd women can proudly say that they successfully ‘harassed’ the dolphins for the purpose of saving their lives.” said Sea Shepherd Founder Captain Paul Watson in response to the arrest in 2014.

Originally scheduled for September 2014, Captain Treverton’s court case has been postponed numerous times. On the 7th October 2014 a Danish Court hearing in the Faroe Islands ruled the seizure of the MV Spitfire was illegal and the boat was ordered returned to Sea Shepherd U.K. However, the Faroese prosecutor immediately appealed the court's decision and Spitfire has been held ever since with no further trial date set.

At 11:00 hrs local time Captain Treverton walked through Torshavn to the main police station with a gathering of Faroese journalists and photographers waiting outside the entrance. She talked to the police officers inside and finally emerged victorious with a new court summons for the 24th of November 2016 and the right to stay in the Faroe Islands and freely walk the streets of Torshavn in her Sea Shepherd logo clothing.

Any Trial Outcome is a ‘Win’ for Operation Bloody Fjords 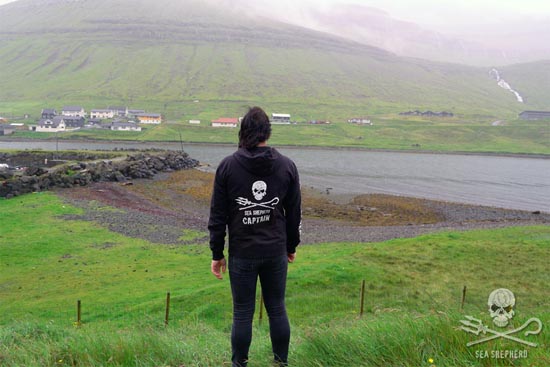 Capt Jessie Treverton at Hvannasund 30th July 2016. Photo: Sea ShepherdWhile indefinitely stalling a trial, the Faroese prosecutor ensured the Sea Shepherd boats remained impounded and the ‘Grind’ continues without any interference by activists. Sea Shepherd’s Faroese legal team representing Captain Treverton believes that the lengthy postponement is intentional because any such trial will have a ‘landmark’ impact on the archipelago’s traditional drive hunt and slaughter of pilot whales and other dolphins.

Faroese lawyer Jógvan Páll Lassen, who has defended Sea Shepherd on several occasions in the Faroese courts, was quoted today by a Faroese journalist as saying; ”the question of the dolphins, which Sea Shepherd were driving away outside of Hoyviksholm, has never come to the courts. The case is drawn out, since several different people must first give their accounts. As I see it, the prosecution is busy finding proof that it is animal cruelty to drive a pod of dolphins away from a Faroese fjord. Then it’ll be interesting to learn what they think about [the Faroese] driving pilot whales ‘into’ a Faroese fjord.”

“I’m looking forward for my case to be heard in court, to highlight the ridiculous hypocrisy of the grind laws,” said Captain Treverton on arrival in Torshavn on Friday. “If I am found guilty of ‘stressing’ dolphins, the dolphin hunters can also be charged with that same offence. If I am found innocent, any person will be free to direct dolphins away from the islands to safety. Either way, it is a win for the oceans.”

“For almost two years this case has been deliberately stalled by the Faroese prosecutor Linda Hesselberg who has victimised Sea Shepherd volunteers and illegally seized Sea Shepherd boats, holding them at undeclared locations in the Faroe Islands with little or no maintenance and a refusal to allow Sea Shepherd to inspect them,” says Read.

One of those boats is the Echo, which was used to disturb the grindadráp at Sandavagur in 2015 then seized by the Danish navy ship HDMS Knud Rasmussen in the Shetland Islands just minutes before Sea Shepherd’s legal team had a Bill of Suspension signed by the High Court in Edinburgh to prevent its removal to the Faroe Islands.

The latest Faroese ‘Grind’ on July 26th saw a pod of approximately 200 long finned pilot whales driven by 25 Faroese boats for two hours before 135 were eventually beached and killed on the rocky shoreline at Hvannasund in the second and largest slaughter of 2016. 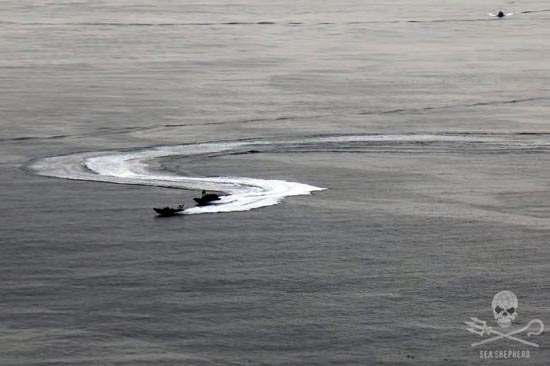