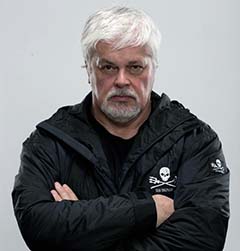 Why is Sea Shepherd not attending the Ocean Blue Film Festival & Conservation Summit in Monaco?

Captain Paul Watson has been giving talks to large crowds all around France for the last year, addressing thousands of people in Paris, Lyon, Marseille, St. Tropez, St. Malo, La Rochelle, Strasbourg and many other places. He has also spoken via Skype to the United Nations, to conferences in numerous countries and given TED talks in Australia, Canada and the USA.

Because of this many people expected Captain Paul Watson to attend the Ocean Blue Film Festival where the promoters are advertising that icons of the ocean conservation movement will be attending. After all, he is living close by and could easily attend.

Sea Shepherd is the most aggressively active marine conservation organization in the world with a long record of participation in award winning films like The Cove, Sharkwater, How to Change the World, A Pirate for the Sea, Eco-Pirate, and numerous other films, plus the Discovery/Animal Planet television series Whale Wars.

Sea Shepherd supporters around the world and especially in Italy, Southern France and Monaco were therefore curious as to why Sea Shepherd would not be represented.

The reason being is that Sea Shepherd was not invited to the Festival and not welcome.

Captain Watson and Sea Shepherd were not invited to the Ocean Blue Film Festival and Conservation Summit because Sea Shepherd has made it very clear that Captain Watson or any director or officer of Sea Shepherd will not attend any event where marine species are being held as slaves for the amusement of human beings or where fish and other marine life are served as food to participants.

This event is being held at the Monaco Oceanographic Museum and this facility exhibits captive sharks, sea turtles and other fishes.

The Oceanographic Museum proudly boasts that they have "blacktip reef sharks, a nurse shark, a hawksbill sea turtle, moray eels and a majestic giant guitarfish living side by side."

The truth is that they are not living side by side, they are all inmates in the same prison and they will die before their time.

The position of the Sea Shepherd is clear. We will not participate in any event where marine animals that have been captured from the wild are being displayed, where their lives have been cut short, where their freedom has been denied and where their welfare has been sacrificed for no other reason than human vanity.

Captain Watson has said enough is enough. “I am also fed up with attending ocean conservation events where seafood is served. I’ve been invited to events to speak where cocktail parties or dinners are served that include fish, shrimps, lobster and farm raised salmon. In Cannes earlier this year I was invited to a fundraising event for environmental causes where Chilean Sea Bass was served. I once attended a forum in the Dominican Republic hosted by Conservation International on exploring solutions to protecting marine life where an incredible smorgasbord of fish, crustaceans and mollusks were served. This is not only hypocritical, it’s ecologically insane.”

The Ocean is facing serious threats to the survival of marine life and oceanic biodiversity is being rapidly diminished. Humanity has simply got to stop stealing lives from the sea. And until people, institutions and groups that are actually involved in marine conservation begin to actually practice what they seem to be preaching, this situation will not be reversed.

“The Ocean Blue Film Festival and Conservation Summit means well,” said Captain Watson. “I’m sure the participants have a genuine concern for conservation and I understand the value of such events to recognize great films and the achievements of conservationists, both groups and individuals. However there is a disconnect here and it has to be addressed. You can’t be an ocean conservationist and support captivity or consume life stolen from the sea.”