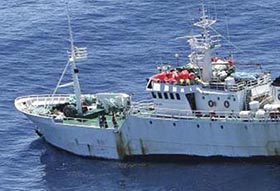 The Kunlun, formerly the Chang Bai, has a long history of illegal fishing (Image courtesy CCAMLR)Captain Peter Hammarstedt of the Sea Shepherd ship Bob Barker, has called on New Zealand authorities to arrest the renowned toothfish poaching vessels, Songhua and the Kunlun – known better as Nihewan and Chang Bai – after they were intercepted by the New Zealand Navy yesterday for illegal fishing in the Southern Ocean.

The appeal comes on the back of reports that the two vesselsare continuing to fish, despite New Zealand's intervention.

Captain Hammarstedt said, “While we commend the New Zealand Navy for their interception of the two renowned toothfish poachers, the government of New Zealand now has the responsibility of showing those who profit from fisheries crime that poaching will not be tolerated in the Southern Ocean. These ships have been operating in the Antarctic for over 10 years. If these vessels are not arrested, then they will continue poaching this year and for many years to follow, making the interception all for not.”

The vessels, which are two of the remaining “Bandit 6” toothfish poaching vessels that continue to operate illegally in the waters of Antarctica, have been described by New Zealand Foreign Minister Murray McCully as “serial offenders.”

In 2008, the Songhua, then named Paloma V, was blacklisted by Commission for the Conservation of Antarctic Marine Living Resources (CCAMLR) after being detained by New Zealand for illegal fishing activity. A year later, on its 2009/10 Antarctic Whale Defence Campaign, Sea Shepherd confiscated an illegal gillnet set by the Paloma V from the Antarctic waters.

Both vessels are known by authorities tohave connections to the Vidal Armadores network – an infamous Spanish crime syndicate of illegal toothfish operators. Both have also changed names periodically, and have flown under “flags of convenience” in order to avoid detection by authorities.

“Clearly, the Paloma V, now operating as the Songhua, has graduated from fencing stolen fish to grand theft of marine wildlife. These criminals have repeatedly demonstrated that they have no respect for the law, and are blatantly flaunting their illegal activity in the face of New Zealand authorities. It's time to bust-up this crime ring, lock-up these vessels and throw away the key for good,” said Captain Hammarstedt.

The Songhua, formerly Nihewan and Paloma V was detained in New Zealand in 2008, but released with a warning (Image courtesy CCAMLR)