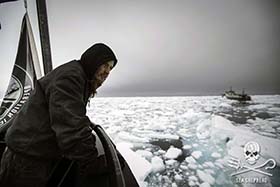 The previous record of 21 days was set in 2003 by the Australian patrol vessel, Southern Supporter, when it chased the Uruguay-flagged Viarsa I across the Southern Ocean. The Viarsa I fled after it was accused of poaching Patagonian toothfish inside Australia's Exclusive Economic Zone.

Bob Barker Captain, Peter Hammarstedt, stated, “Eleven years ago, the Southern Supporter bravely embarked on a high-seas chase like no other in history, to defend our oceans from those who would profit from its destruction. Today, the Bob Barker pays homage to their efforts, as we continue to chase the wanted poaching vessel, Thunder, further away from their hunting grounds in shadowlands of the Southern Ocean. The poachers have led us through treacherous ice and stormy seas, and continue to try to out-will us at every turn. But we remain undeterred, stead-fast in our pursuit, resolute in our commitment to ensure that these poachers receive justice for the devastation they have left in their wake.”

Meanwhile, the Sea Shepherd ship, Sam Simon, continues mammoth operations to retrieve illegal gillnets, abandoned by the Thunder inside the Commission for the Conservation of Antarctic Marine Living resources (CCAMLR) area of management, when it fled from the Bob Barker on December 17.

The Sam Simon completed the retrieval of the first illegal gillnet on December 29. In an operation that spanned five days, the crew hauled 25 kilometres of illegal gillnet out of the Antarctic waters. Over 200 toothfish and other marine creatures were found dead in the net. 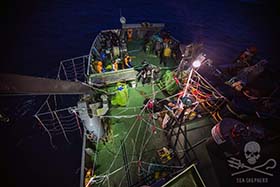 Strategic operations of the haul on the aft-deck of the Sam Simon. Photo: Giacomo GiorgiRetrieval of the second “monster”, which measured 19 kilometres, was completed on Tuesday. While slightly shorter than the first net, the “monster” net contained over twice the catch of the previous haul. Approximately 500 toothfish, and hundreds of other marine creatures were found dead, many in advanced stages of decomposition.

He said, “The Thunder has been mocking CCAMLR’s conservation measures and its Member states for over ten years. The poaching vessel has covered the entire Banzare Bank with gillnets exceeding 100 kilometres in length. These curtains of death, criss-crossing the seabed in every direction, is decimating vulnerable toothfish populations and the Antarctic Marine Ecosystem. In addition to this, we know that the bycatch numbers of these banned gillnets are equal to the targeted catch numbers; a statistic that would be an outrage in any regulated fishery.”

The use of gillnets has been outlawed by CCAMLR since 2004, and the Commission has specifically expressed concerns regarding the impact of this fishing method on the marine ecosystems of Antarctica.

A known poaching vessel, the Nigerian-flagged Thunder was issued with an Interpol Purple Notice following a joint effort by Norwegian, New Zealand and Australian authorities, and is currently included on CCAMLR’s black-list of Illegal, Unreported and Unregulated (IUU) fishing operators.

On January 8 2015, the Sea Shepherd ship, Bob Barker, marked the 22nd day of its pursuit of the
Interpol-listed poaching vessel, Thunder. In doing so, the conservation ship has broken the record
for the world's longest sea chase of a poaching vessel.