Sea Shepherd Assaulted While Attempting to Communicate with Crewmembers On Board Poaching Vessel, Thunder 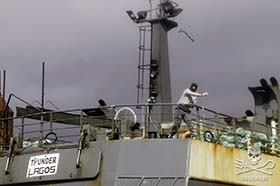 Masked officer on board Thunder throws chain at Sea Shepherd small boat crew. Photo: Simon AgerSea Shepherd crewmembers were assaulted on Thursday while attempting to communicate with crew members on board the Interpol-wanted poaching vessel, Thunder.

The incident occurred at approximately 1000 am AEDT when the Sea Shepherd ship, Sam Simon, launched one of its small boats. On board, Sea Shepherd crewmembers carried with them letters, requesting information on the welfare, safety and working conditions of the deck crew of the Thunder.

Captain Sid Chakravarty of the Sam Simon said, “It seems the deck crew on board the Thunder are of Asian descent. We are also aware that human trafficking and modern day slavery is rife in the high seas fishing industry, with crew forced to work obscenely long hours, in dangerous and oppressive conditions, for little or no pay. The situation is reported to be even worse on IUU (Illegal, Unregulated, Unreported) vessels. Given this, we decided to try to communicate with the crew, to assess their situation and to assure them that they are not the target of our pursuit.”

The Sea Shepherd small boat crew successfully threw messages in plastic containers on to the decks of the Thunder. However, the messages were intercepted by a masked European officer and it is unclear if any of the messages reached their intended recipients.

The masked officer then threw a number of items at the Sea Shepherd small boat crew, including a chain, a small metal object and an orange smoke flare. While the chain narrowly missed the crew, the photographer on the small boat was hit by the metal object, which then fell into the sea.

All of the Sea Shepherd small boat crew are reported to be unharmed.

Captain of the Bob Barker, Peter Hammarstedt, said “Those in charge on the Thunder were clearly incensed by our attempt to communicate with the crew. The masked officer's efforts to hide his face, and his violent reaction to our attempt to communicate, are not the actions of an innocent man. We are dealing with seasoned criminal operators who, for the past ten years, have shown a flagrant and repeat disregard for international law. While the governments of the world turn a blind eye, these poachers are exploiting vulnerable toothfish populations, and some of the most vulnerable people in the world – forced labour at sea. This is the very human side of what is both a massive environmental and a human rights disaster.”

The Thunder is one of six IUU fishing vessels that are known to target vulnerable Antarctic and Patagonian tootfish in the Southern Ocean.