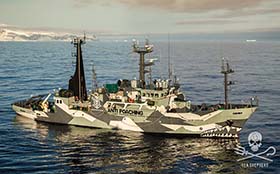 The announcement comes after reports that the New Zealand Navy has now abandoned its operation to intercept the poachers in the Southern Ocean, and is returning to port.

Captain Chakravarty said, “With three criminal boats on the loose and the Navy on its way back, the Sam Simon is now the only vessel with the intentions and the capability to locate the poachers once again. We have an intimate knowledge of these seas, we have an ice-strengthened vessel and we have the will to directly intervene and physically shut down their criminal operations.”

The HMNZS Wellington intercepted the three poaching vessels, engaged in illegal fishing activity in the Southern Ocean. Reports from the New Zealand government stated that the vessels were intercepted west of the Ross Sea, however their exact position was not released.

The three vessels, the Songhua, Kunlun and Yongding, are confirmed to be registered in Equatorial Guinea and are known to have links to the infamous Spanish crime syndicate, Vidal Armadores. All three vessels have now been listed with Interpol Purple Notices.

Despite the fact that a request by the New Zealand government to board the vessels was granted by Equatorial Guinea, two of the ship's captains refused to allow New Zealand Navy to board. The poachers then engaged in evasive manoeuvring, and subsequently fled.

Captain of the Bob Barker, Peter Hammarstedt, has criticised the Australian government for leaving the New Zealand government stranded.

Since December 26, the Sam Simon has been involved in mammoth operations to extract illegal gillnets, left by the poaching vessel Thunder, from the Southern Ocean. More than 60 kilometres of illegal gillnet has been retrieved so far, with over 1,000 toothfish and numerous non-target marine species found dead in the nets.

“For the past three weeks, my crew and I have been retrieving illegal gillnets left by the poaching vessel, Thunder, from the Antarctic waters. We have a responsibility to see the retrieval operations through to the end. Once this is complete, we will set our sights on these three new targets,” said Captain Chakravarty.

The Bob Barker continues its record-breaking pursuit of the Interpol-listed Thunder, which today runs into its 29th day.

On the run – known poaching vessel Yongding, formerly the Chengdu (Courtesy of CCAMLR)